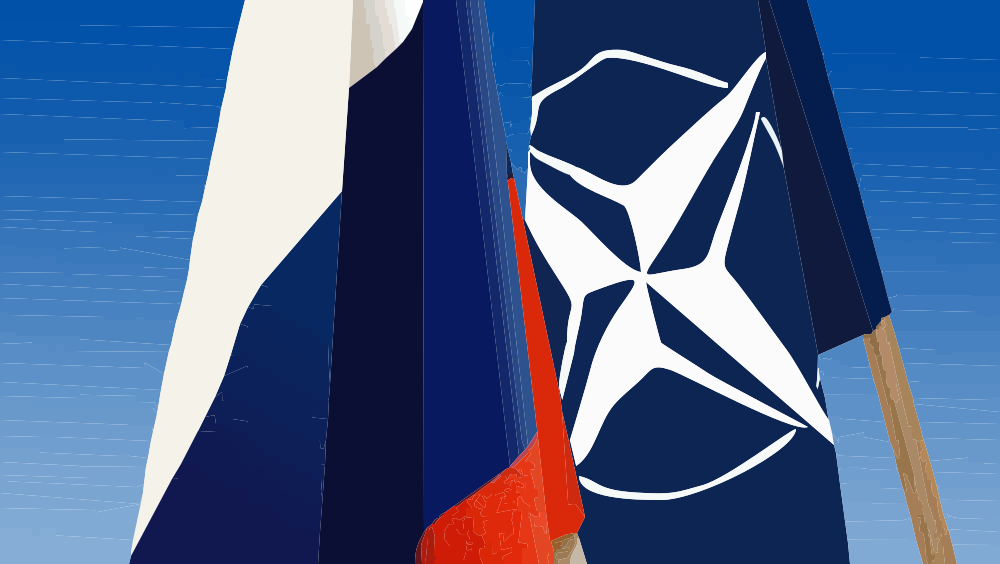 In her recent article “Russia – A Threat to European Security? A View from Germany”, Gabriele Schöler argues that NATO’s recent “counteraction” against Russia amounts to “provocative behaviour”, since it could be seen as a threat to Russian security. Since 1989 and the fall of the Soviet Union, Russia has seen the dissolution of the Warsaw Pact and the loss of much of its territorial control and global influence. Not only has Russia lost its status as a major world power, it has given that very power up to its arch-enemy from the Cold War: the United States or rather NATO, when the latter integrated all the former Eastern European Warsaw Pact states and three former USRR republics to boot.

After this historical and political reasoning, Schöler openly asks: “Who is perceived to pose a threat to whom?” claiming that this is a more critical and logical question than “who started the conflict?”

As NATO troops are currently deployed in Poland and the Baltics, Schöler goes on by saying that deploying “NATO troops in Central and Eastern Europe on a permanent basis would be a clear violation of the Founding Act on Mutual Relations, Cooperation and Security between NATO and the Russian Federation signed in Paris in 1997”. The act was initiated to ease Moscow’s concerns about NATO’s eastern enlargement and its original mission was to “build together a lasting and inclusive peace in the Euro-Atlantic area on the principles of democracy and cooperative security”.

However, as Russia started to regain political, economic and military strength, its leadership took a more confrontational stance which was not aligned with Western values. Published early in 2017 by the Royal United Services for Defence and Security Studies, the book “NATO and the North Atlantic: Revitalising Collective Defence” supports the argument that Russia is trying to meddle in Western affairs, claiming as its starting point that “Russia is blatantly attempting to change the rules and principles that serve as the foundation of European law and order.” The greater part of this work’s thesis puts Russia at the centre of the West’s military and defence concerns, giving NATO a palpable reason for its comeback as an essential international organisation.

During the US presidential campaign, Donald Trump, then the Republican candidate, frequently contested NATO’s existence, calling it “obsolete”, while accusing its members of not upholding their commitment of paying 2% of their GDP to the Brussels-based organisation.

In April this year, after a meeting with NATO’s Secretary-General Jens Stoltenberg in Washington DC, President Trump backtracked one of his most controversial campaign promises, saying NATO was “no longer obsolete”. According to the analyst Michael Chossudovsky, pro-NATO advisers influenced Trump to change his stance, showing that the US President is not exerting any presidential authority but caving in to the dominant interests of the US elites.

In Europe, NATO is widely perceived as an indispensable institution for the security of the continent, based on the argument of a resurgent Russia and a “vulnerable Europe” following the terror attacks in several European cities.

On the same note, Andrew A. Michta wrote for Carnegie Europe: “A Common Threat Assessment for NATO?” pointing out “two issues” that are rapidly rising to the top of the organisation’s agenda: “regionally, a resurgent and geo-strategically assertive Russia and globally, the accelerating threat of Islamic terrorism”. Michta goes on, saying that this is “a unique opportunity for NATO to align the security outlooks of key European members with that of the US”.

Nevertheless, in May, on the occasion of the first NATO summit attended by Trump, in Brussels, the US president kept his accusations towards 23 of the 28 NATO members of being freeloaders for not paying their fair share towards military protection. The US’ current defence budget of $824.6 billion is the second largest item of federal government expenditure after social security at $1 trillion.

Now, let’s take a look at how the Western media has been portraying Russia’s conduct. The Economist published in October 2016 “The threat from Russia”, where it highlighted the seemingly endless episode of “Russia hacking the American election” and touched on the “mass slaughter in Syria”, the annexation of Crimea and accusations of Russia talking casually about using nuclear weapons.

While the idea of a fragmented Europe is likely to be in the Kremlin’s interests, the Russian intervention in the Syrian conflict is evidently not in the West’s interests.

Syria’s president Bashar al-Assad said during an interview with a Chinese news broadcaster that “the only serious force effectively fighting the Islamic State together with Syria is Russia”. Assad went further, saying that the US deployment of military in Syrian territory was illegal since they were not invited. Interestingly, Reuters published a similar news piece – “Assad calls US forces ‘invaders’ but still hopeful on Trump” – yet it opted to leave out Assad’s declarations on Russia.

On the occasion of the forthcoming celebration of the 1917 October Revolution, Foreign Policy (FP) magazine wrote, last December, “The Soviet Union is Gone, But It’s Still Collapsing”, in which a number of FP’s contributors outlined the reasons behind the Russian Federation’s stagnation over time, mainly from the 2000’s. The authors pointed out that Russia should not base its foreign policy on ideology and claimed that the former Empire can’t lead through imperialism. Moreover, they claim that the advent of globalisation has only empowered autocrats.

In March 2017, James Kirchick wrote for FP the article “The Plot Against Europe”, in which he envisages a gloomy future where Putin will roll into Estonia, triggering the first in a series of assaults.

FP magazine has also been publishing differing views on the so-called “Russian threat”. In his article entitled “Vladimir Putin Isn’t a Supervillain”, Mark Lawrence Shred argues that “Russia is neither the global menace, nor dying superpower, of America’s increasingly hysterical fantasies.” For the author, reality lies between the extremes – a declining power and an imminent threat. Russia is not nearly the global menace that many fear, nor is it doomed to collapse. Russia’s geopolitical strength is indeed constrained by its demographic, economic, social, and political weaknesses, but those aren’t as catastrophic as they’re often made to be.

On the other hand, in March 2017, EUobserver published an article “Russian missiles pose new threat to Europe”, in which critics from the US and Germany expressed concerns about the Russian missiles deployed in Kaliningrad, the Russian enclave between Poland and Lithuania. On 10 March, after the EU summit in Brussels, EUobserver delivered another alarming title: “EU alarmed by Russian meddling in Balkans”. At stake are growing fears of nationalist and ethnic tensions in the region that EU leaders believe to be the ideal opportunity for Russian interference in the form of disinformation campaigns.

Who is threatening whom?

Since the Russian annexation of Crimea in February 2014, tensions have grown between Moscow and the West. Endless warnings were delivered by EU leaders until economic sanctions were imposed on Russia. While Russia claims Crimea as its rightful territory, the West, backed by NATO, started moving forward with military deployments in the Baltics, Poland and Romania. The Kremlin did not take long to react to the military deployed in Poland and the Baltics, branding it a threat to Russia’s national security.

The Cold War feeling has been growing more intense. At least, that’s what the media are conveying on both East and West. Will Putin make an attempt on European soil through the Baltic? What should NATO do to make it more difficult to present its largely defensive acts as aggressive moves against Russia?

Comparing the pictures one sees through the lenses of Western media on the one hand, and the RT and Sputnik, often rightly branded as the Kremlin’s propaganda outlets, on the other, one cannot help but see yet another war of words and (dis)information.