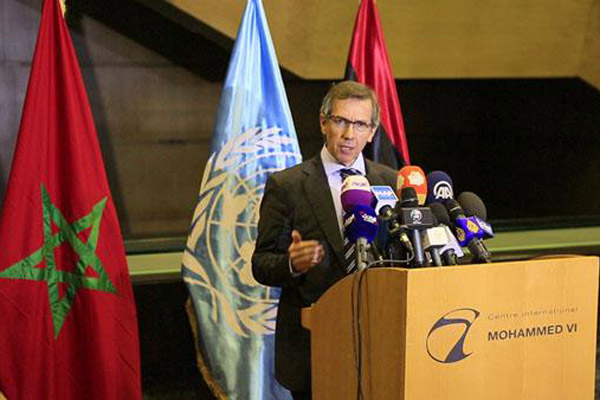 An UN-proposed peace deal for Libya was signed late Saturday, 11 July 2015, in Morocco by some of the country’s political factions. The agreement was widely hailed as a move towards stability in the war-torn country. The deal lays the foundation for the establishment of a national unity government and the granting of legislative authority to the Tobruk-based assembly. Executive authority will be invested in a council of ministers headed by a prime minister and two deputies.

Ever since the overthrow of Muammar Gaddafi, Libya’s two rival governments have been vying for power as well as a myriad of other armed groups who have also been fighting for control of the oil-rich nation. The peace deal comes after months of negotiations brokered by the United Nations; yet the flipside to Saturday’s gathering is that a key player–the General National Congress–boycotted the ceremony and chose not to take part in the agreement.

The deal is a step forward and provides a respite from the political turmoil plaguing Libya. Though small signs of relief in the battle against the self-proclaimed Islamic State are in sight, the chaos that followed the downfall of Muammar Gaddafi keeps the country split into rival factions. It is hoped that the agreement will provide a much-needed framework for peace and stability in the North African nation. The EU has been highly affected by the turmoil in Libya, with the country posing a significant external threat. The 28-nation bloc knows that, unless there is a unity government, Libya will continue to serve as as a stepping stone onto the European continent for Islamist fighters and people smugglers.

There are fears of a spillover effect with Libya acting as a bridgehead for Islamist extremists looking to carry out attacks in the European Union. More stability and peace will help stem the flow of both foreign terrorist fighters and migrants trying to make their way to Europe. The EU is trying to clamp down on illegal migration from Africa via Libya, where people smugglers have stepped up their lucrative business. A functioning country will also mean that Libya will be able to secure its own borders and stop the illegal makeshift boats packed with immigrants flooding European shores. The International Organization for Migration said on 10 July that some 150,000 migrants have crossed the Mediterranean to Europe this year alone, about half of them to Italy, which is just north of Libya, and the other half to Greece.

Together with Italy and France, EU’s Foreign Affairs Chief, Federica Mogherini applauded those who have taken part in the agreement saying that “they have taken the future of Libya in their hands, in a responsible and courageous way.” Together with the UN envoy, Spaniard Bernardino León, she expressed the hope that “those who have not yet initialed the agreement could display a similar spirit of consensus and responsibility, in the interest of all the Libyan people.”