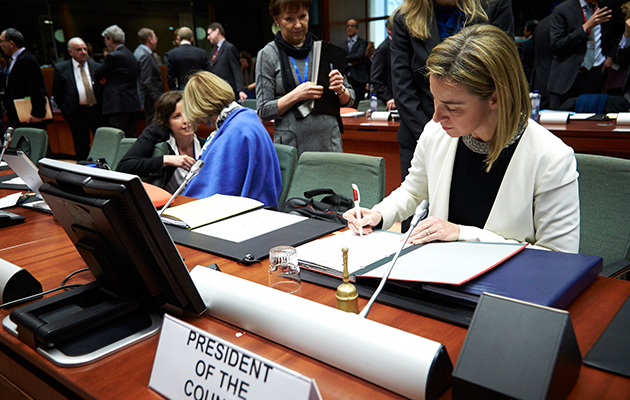 Shaken by some 1,000 migrant deaths in the Mediterranean in the past few days, while trying to reach Europe through irregular ways, the EU’s foreign and home affairs ministers agreed today in Luxembourg to a ten point action plan to avoid such tragedies happening in the future.

European foreign affairs ministers were joined at 24-hour notice by their home affairs counterparts, 41 ministers in total, to discuss migration, an item belatedly put on the agenda because of the weekend tragedies. Other items on the agenda of the Foreign Affairs Council, like the situation in Libya and Yemen and a Sahel Action Plan, were also discussed. However, EU High Representative/ Vice-President Mogherini declared migration as the top priority of the meeting and was pleased to see that “the first step in the direction of a good European response, finally, can be taken”.

The “10 point plan of the immediate actions to be taken in response to the crisis situation in the Mediterranean” was presented by Migration, Home Affairs and Citizenship Commissioner Avramopoulos and received the full backing of foreign and interior Ministers. It includes more resources for the joint operations Poseidon and Triton carried out within the mandate of Frontex, setting up a joint task force to identify human trafficking and smuggling networks, and sharing the responsibility of refugee resettlement among EU countries. Additionally, the European Council President, Donald Tusk, called for an emergency summit on 23 April to validate the ten point plan.

The exact number of migrants dying on the way to Europe is difficult to determine, but the number of irregular migrants crossing into Europe has increased sharply. According to the UN High Commissioner for Refugees (UNHCR), 170,000 people crossed last year, while this year the number is already 15 times higher than in the first four months of 2014. The majority of these are Syrians, fleeing conflict in their war-torn country, but others, such as Eritreans and Ethiopians, also seek asylum, according to Eurostat. In 2013 alone, close to 13,000 asylum applications were filed by minors under 18 years of age, often unaccompanied.

The business of human trafficking is thought to amount to tens of billions every year globally, with each migrant asked to pay a minimum of 1,000 euros for a journey to Europe’s borders. Given the conditions in which they travel, crossing the sea in overloaded boats with no life-saving equipment, almost the entire amount represents the traffickers’ profit. The human trafficking and smuggling networks take advantage of political corruption in transit countries or of the lack of a functioning state that controls its borders, as is currently the case of Libya.

Although the repeated migrant tragedies in the Mediterranean have led to European leaders’ statements calling for action to stop the deaths, the European Union has been divided over its migration policy. At a time of reviewing Europe’s relationship with its South Mediterranean neighbour countries through discussions on a new European Neighborhood Policy, the impetus given by the latest row of migrant tragedies might be just what Europe needs to craft a united approach to better manage migration at its borders.

The abuses and exploitation that refugees face at the hands of human traffickers fail to explain or justify the level of opprobrium in the Western media.