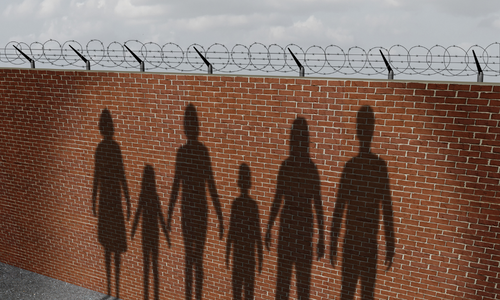 On July 11th, 2022, I was invited to attend “Russia and the Geopolitics of Borders and Migration” a conference held by the State University of Paraíba in Brazil, in partnership with the Research Project “Citizenship between Walls” [Cidadania entre Muros] that studies the phenomenon of ‘wall-building’, a geopolitical event that leads to the creation of new borders or delimitations globally. In my view, this is an extremely important topic as we are currently living in a world that has been facing constant changes, especially geopolitically.

When we talk about walls, we must consider geopolitical events like military activities, and climate change, as well as political events such as Brexit and political differences between countries as these, are some factors that may lead to new “wall-building”. Walls, however, are nothing new, from the Incas to the Aztecs in the Americas to the Greeks and the Romans in Europe, walls served as a measure of security and protection built to protect villages and entire cities. Historically, the world’s largest wall of antiquity was built by the Chinese around 220 B.C.  to serve as a protective barrier against possible enemy attacks and is known today as the Great Wall of China.

Today, we live in a globalized world filled with advances on several fronts that have virtually abolished borders thanks to economic and technological developments.  Nevertheless, the Professor of Geography and Geopolitics, Dr. Michel Foucher states that “about 3% of the worldwide territory is now equipped to be hardened borders, with walls, electronic devices, or barbed wire fences”[1] serving as barriers for human beings, which very often results in social divisions. The growing sense of nationalism caused by economic crises, misinformation, and ideologies propagated by an increasing number of leaders among their citizens only reinforces the creation of new walls. Unquestionably, we have evolved as humanity when we talk about barriers and borders, but as Dr. Boucher argues and I quote: “there are still several borders that divide our world, and this division continues to spread through it.” If on the one hand our lives have been facilitated due to social transformations, freedom of movement and communication, on the other hand, there are still several limitations that hinder the lives of minorities. Refugees and migrants, for instance, are among the most affected minorities / vulnerable groups due to the lack of information, documentation, visa support limitations and economic and social problems.

In the recent past, the Berlin Wall was torn down, symbolically marking the end of the Cold War and the ideological split between East and West.  Since then, though, several new walls have been built, such as Israel’s Apartheid Wall, a whole 360-kilometer-long wall that includes electric fences, trenches, and security patrols built in 2002,[2] as part of Israel’s West Bank annexation plan apartheid regime over the Palestinian people. Another great example of this political and social-economic division is the walls of the Spanish enclaves of Ceuta and Melilla, surrounded by Moroccan territory. These walls are more than 20 kilometers long and have been raised by Spain to separate its territories and prevent the illegal migration of people from the African continent. Sadly, many have already lost their lives in attempts to climb these fences.

Apart from the walls built in Israel and Spain, there are several other walls scattered around the world, such as the one built by Egypt in the border region with the Gaza Strip, the one dividing Kuwait from Iraq, and a dividing line between India and Pakistan in Kashmir known as Line of Control (LoC). In the Americas, the 1000-kilometer-long wall built by the U.S. to prevent illegal migrants from entering its territory from Mexico is another symbol of the deep divisions characterizing our world today. And it can be seen as an emblem of the great divide between the Global North, which encompasses rich and developed countries, and the Global South of poor and underdeveloped nations. Yet from a more conceptual point of view, walls separate nations, families, and friends, and contribute to the further rise of racism, prejudice, and xenophobia among people.

These are alarming signs in a world whose population is growing and so are inequalities, an explosive mix that can lead to more tensions and violence in an already fragile world. If we want a peaceful, sustainable, and resilient world we must rethink our social and political systems through global lenses, for the benefit of humanity as a whole.  Quoting from the closing statement by the Professor of International and European Law, Dr. Giuliana Dias Vieira at the aforementioned conference at the State University of Paraíba: “We live in a contemporary society where its walls should be re-thought or even completely broken. The process of re-construction of border walls around the world indicates that it’s urgent to comprehend the political meaning to it, to search for better ways to assure human rights to all people with no violence.”