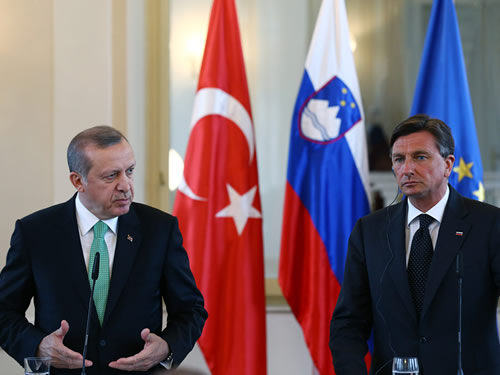 Turkey’s diplomatic relations with Slovenia, Slovakia and Romania have seen a boost this week as President Recep Tayyip Erdoğan paid official visits to the three countries.

In Slovenia, the Turkish leader met with President Borut Pahor and with Prime Minister Miro Cerar on Monday, 30 March 2015. President Erdoğan dismissed accusations that Turkey would cooperate with the Islamic State in Iraq and the Levant (ISIL or ISIS) and asked European countries to help restrict the travel of individuals wishing to join the terrorist group via Turkey. So far, more than 12.000 people suspected of affiliation with ISIL have been banned from Turkey.

President Erdoğan met with Slovak President Andrej Kiska in Bratislava on Tuesday, 31 March, and discussed Turkey’s EU accession process. Slovakia has been a long-standing supporter of Turkey’s integration into the EU and was granted visa-free travel to Turkey for its citizens in 2014. Slovakia will hold the presidency of the EU in 2016 and is expected to advance negotiations on EU accession with Turkey, a “key country for Europe”, as President Kiska called it. Currently, the European Commission has asked Turkey to undertake considerable efforts to comply with 13 of the 33 chapters of the acquis communautaire.

In Romania, the Turkish President was received on 1 April by President Iohannis, who declared in a press conference that, outside the EU, Turkey remains Romania’s largest trade partner. The two presidents reiterated their commitment to increasing trade partnerships, while Iohannis restated Romania’s support for Turkey’s accession to the EU.

In his public statements in the three countries, Erdoğan called on Turkish citizens residing in Europe to vote at the general election on 7 June of this year.

The Turkish President’s visit to Romania had to be cut short due to the killing of a Turkish prosecutor, who had been taken hostage by the Revolutionary People’s Liberation Party-Front, and other terrorist incidents in Istanbul.