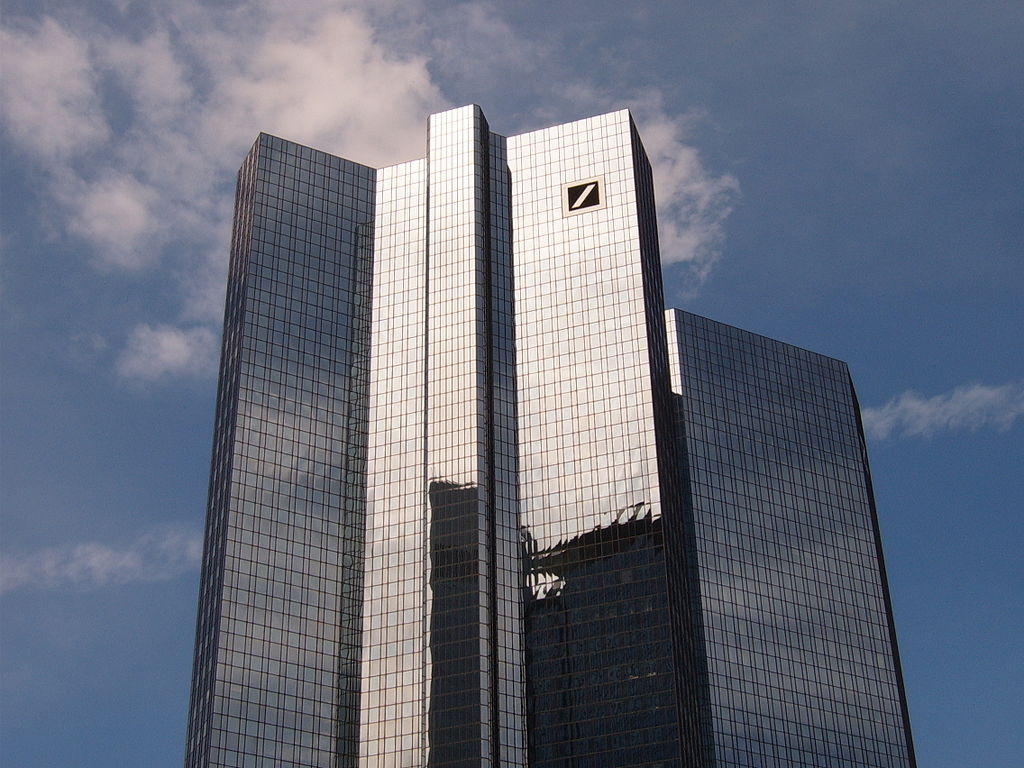 Germany’s biggest bank hits the headlines after being asked to pay a $14 billion fine to the US Department of Justice. The markets are said to be nervous.

Fear of a banking bust is looming again after ten hedge funds pulled their significant assets out of Deutsche Bank last week. The markets are growing jittery: this is Germany’s biggest bank and its shares dropped 8% after the Department of Justice’s (DoJ) shock announcement on 15 September.

The pressure started building in mid-September after the DoJ imposed a $14 billion fine (€12 billion) on the German behemoth for its mortgage lending activities during the housing bubble that led to the 2008 financial crisis. In response, the bank issued an urgent statement confirming negotiations with the DoJ to reduce the penalty. Further reports suggested Deutsche Bank may get away with paying a settlement of as little as $5.4bn.

Investors are now speculating as to whether the German government will bail out the struggling bank, though according to Frankfurter Allgemeine Zeitung, this is unlikely given the current political situation in both the European Union and Germany.

“Of course Chancellor Merkel doesn’t want to give Deutsche Bank any state aid,” the German daily wrote. “She cannot afford it from the point of view of foreign policy because Berlin is taking a hard line in the Italian bank rescue.”

Deutsche Bank’s CEO John Cryan sent an email to his 100,000 employees, reassuring them of the firm’s financial soundness. In addition, the bank delivered a message to both Bloomberg and the Financial Times.

It said, “Our trading clients are amongst the world’s most sophisticated investors. We are confident that the vast majority of them have a full understanding of our stable financial position, the current macroeconomic environment, the litigation process in the US and the progress we are making with our strategy.”

Unfortunately for the banking sector’s reputation, history has repeatedly shown that this type of message lacks credibility, not least during the 2008 financial crisis, which began with the collapse of Lehman Brothers. Indeed, on 14 March 2007, the day after a precipitous drop in Lehman’s stock – the culmination of five years of concern that increasing defaults would affect the bank’s profitability – the investment bank reported record revenues and profits for its first fiscal quarter.

The shock through the eyes of analysts

According to Jacob Funk Kirkegaard from the Peterson Institute for International Economics (PIIE), “Deutsche Bank’s current business model is unsustainable – it simply cannot be allowed to continue to operate with a trillion-and-a-half-euro ($1.69 trillion) balance sheet and just a few tens of billions of euros in equity.” However, Kirkegaard added that “this is not another Lehman Brothers moment”, thanks to the bank’s access to unlimited liquidity from the European Central Bank (ECB).

On a similar note, Bryan Rich wrote a piece for Forbes stating that “Deutsche Bank is too big to fail,” based on past promises by ECB President Mario Draghi that he would do “whatever it takes” to save the euro. “Letting Deutsche Bank go would undo trillions of dollars of central bank intervention and years of global economic recovery,” noted Rich.

On the other hand, KBW analyst Frederick Cannon thinks Deutsche Bank’s troubles might be a foretaste of darker things to come. “While the near-term issue is the potential for a settlement with the US Department of Justice, the longer-term issue is the depressed level of profitability of the bank and their inability to grow capital through earnings or raise capital in the market,” the analyst said in a research note.

However, besides the losses we recently learned about, speculation is all we have for now. All eyes are on the soon-to-be-revealed outcome of the negotiations between the DoJ and Deutsche Bank, and on the position to be taken by the German government.

Martin Schulz chose not to openly champion for “red-red-green”. He then plunged in the polls, also failing to represent an alternative for Germany and Europe.

Renzi and Macron aim to promote growth and employment by following the path of Germany’s last social-democratic chancellor. They may be digging their own graves.