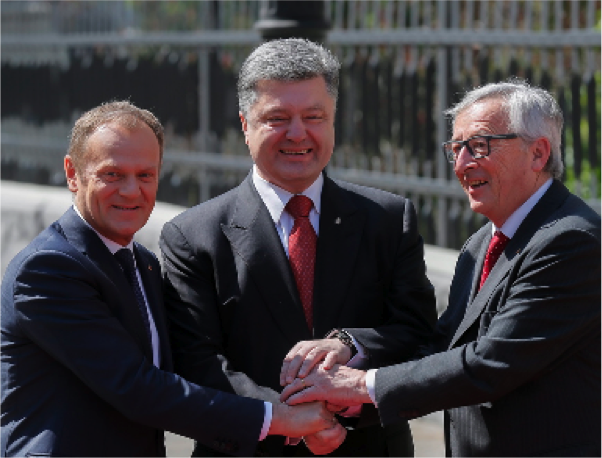 If you blinked you might have missed it. The 17th EU-Ukraine Summit in Kiev has come and gone without too much fuss. Little media coverage, few analyses, only a joint statement and Donald Tusk’s Tweeter feed to remind us that Ukraine and the European Union have met for the very first time under the new Association Agreement. It is also the first Summit to take place after Viktor Yanukovych was ousted from power more than a year ago.

The importance and outcome of the Summit remain by no means secondary. If anything, resuming this high-level bilateral meeting signals a less volatile, albeit still dangerous situation in Eastern Ukraine. The Summit comes at a time when the EU is hoping for a continued clampdown on corruption, as the Ukrainian government is making notable progress in key areas of state reform. In the joint statement, European Commission President Jean-Claude Juncker and Council President Donald Tusk also commended efforts undertaken by the officials in Kiev in preparing to implement the DCFTA agreement (Deep and Comprehensive Free Trade Area) – the bone of contention that led to the 2014 Ukrainian revolution. The EU officials praised President Poroshenko’s commitment to restructuring the energy sector, including the heavily subsidized oil and gas company – Naftogaz. On the urgent issues of territorial integrity the leaders present at the Kiev Summit reaffirmed their condemnation of Russia’s actions of illegally annexing Crimea, while also “calling on all parties to swiftly and fully implement the Minsk Agreement.”

But all was not quiet on the eastern front. According to Reuters, even as the Summit unfolded the Ukrainian army reported one serviceman dead, as shelling intensified in the pro-Russian rebel-held east and south-east. The ongoing upheaval is a real threat to regional stability and to Ukraine’s sovereignty and control over its own territory. The Minsk Agreement continues to be violated, with observers from the Organization for Security and Cooperation in Europe (OSCE) reporting an increase in shelling and fighting still happening in the eastern part of the country. The conflict between Russian-backed separatists and Kiev has displaced over 1 million people and left more than 6.000 dead, both military and civilian.

The joint EU-Ukraine statement also notes that under the € 11 billion financial support pledged by the European Union, some € 6 billion has been already disbursed. Given the situation on the ground the Ukrainian President, Petro Poroshenko, was hoping to get more out of this summit than a mission statement and a pledge for more financial support. Mr. Poroshenko wanted a show of solidarity in the form of EU peacekeepers being sent to Ukraine. The European Council President, Donald Tusk, ruled out such a possibility at this point, announcing on Twitter that “EU will send civilian assessment mission to Ukraine.” In dealing with the Ukrainian crisis, the European Union has consistently excluded the option of sending military assistance, relying on economic sanctions to deter Russia from seeking further escalation.