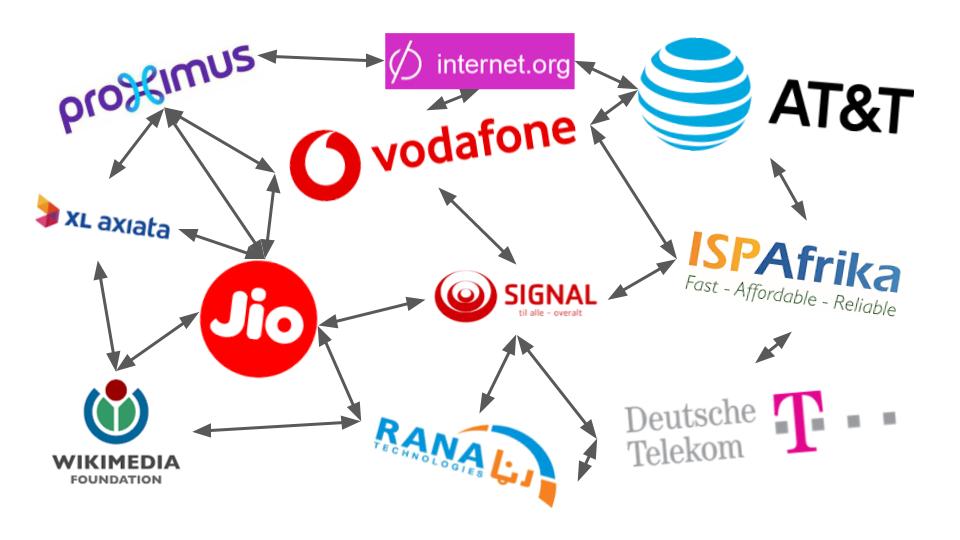 Having discussed how data is registered and located on the worldwide web, there is one more factor to discuss concerning your connection to the internet.  As the data moves across the network of cables, it passes through a series of servers and cables controlled by a wide variety of Internet Service Providers (ISP). There are several kinds of ISPs. The one you are likely to be familiar with is your local internet company. These are the people you pay every month to have an internet connection. However, they are not the only ISP involved in connecting you to the internet. Local ISPs like your internet company normally only have cables that run internally in your country, with larger companies potentially expanding into neighbouring companies. So, when you request data from a location beyond the reach of your provider’s network, how does your request make it to its destination?

The answer is that networks create partnerships with other networks. In order to provide the services that they promised their customers, your local ISP makes an agreement with other ISPs to allow traffic from the first ISP’s users onto the second’s network. These agreements can take several forms. Some are very similar to the contract you might have with your local internet supplier, where the first ISP pays the second for access to their network. However, setting costs at the appropriate level can be a difficult thing, as fluctuations in traffic will affect how cost efficient the arrangement is for both parties. The more common arrangement is called peering. Peered networks allow partners to freely use each other’s networks without imposing charges. There are multiple benefits to this sharing of network infrastructure, including more reliable connectivity and greater capacity to handle large amounts of traffic. Any improvement in network infrastructure by one member benefits all, so investments in one region benefit the global community.

These agreements are mainly informal, with only a small fraction actually being spelled out in contracts. The behaviour of ISPs in these peering setups is therefore governed by implicit norms, as well as applicable local laws and regulations. These laws tend to be minimal, and only apply to traffic carried on networks within the jurisdiction of the local government. Therefore, these arrangements are based on shared principles and reciprocity rather than coercion.

One of the most important of these principles is net neutrality. Net neutrality means that all data on the network needs to be treated equally, regardless of its source, destination, or content. This principle prevents ISPs from forcing consumers to pay premiums for better quality service or access to certain data. It also prevents ISPs from using their position as gatekeepers to charge companies to prioritize their content or avoid censorship. This practice could limit new companies’ ability to compete with larger, more established firms. These practices make using the internet less functional, as overall quality of service decreases and In order to ensure a fair and open internet for all users, net neutrality is required on a global scale.

However, it is currently only enforced on a local level though national or regional laws. Relevant legislation around the world varies from non-existent to exceptionally restrictive. Both of these extreme approaches can have negative impacts on users. As discussed earlier, a lack of regulation can lead to predatory practices by ISPs. While allowing such practices to occur would cause great harm to users, over-regulation of network traffic can create a new set of issues that disproportionately impact poor populations. Examples of this include India and Chile, both of whom have blocked groups such as Internet.org and the Wikimedia Foundation from providing free or low-cost access to certain sections of the internet, including many educational and news sites.

This practice would violate strict net neutrality, since it discriminates against traffic that is not going to approved sites. However, this service provides expanded access to the internet for underserved populations. Additionally, strict net neutrality would prevent the prioritization of emergency service information or other lifesaving data, as well as prevent ISPs from restricting the transmission of malicious data such as viruses and malware. Therefore, a careful balance must be maintained to prevent predatory behaviour while still allowing space for ISPs to provide broadly beneficial services.

As the internet is an emergent global commons, any link in the chain that engages in damaging behaviours hurts the whole system. Therefore, it is important to establish a global understanding that sets the base standard for what net neutrality should include. This set of guidelines should focus primarily on ensuring that ISPs provide equal and safe access to all users, do not abuse their customers, or exploit businesses looking to use the internet to provide goods and services. At the same time, ISPs need to have the flexibility to extend access to lower income users as well as ensure that critical security and safety data will not suffer unnecessary delays in transmission. Room should be left for individual nations to adapt these guidelines to meet the specific needs of their citizens, while still remaining in line with the vision of fair access to the internet.