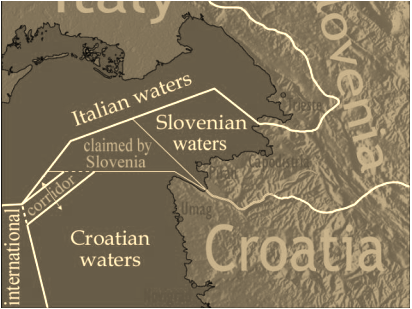 Cometh summer and thousands of tourists flock the sun-soaked shores of the Adriatic. The Gulf of Piran lies at the northern part of the Adriatic sea, erstwhile a part of the Free Territory of Trieste, later Yugoslavia and, since 1991, a bone of contention between two countries—Croatia and Slovenia. The gulf itself is named after the Slovenian city of Piran that lies on its shores.

In bygone years, Slovenia had staunchly made moves to prevent Croatia’s accession to the European Union, until it relented in late 2009. The Croatian government is backing out of the arbitration panel that was created to resolve the Gulf of Piran border dispute between itself and Slovenia under allegations of a Slovenian judge’s violation of the tribunal’s impartiality rules. The issue is now back as the Croatian newspaper Vecerni leaked supposed telephone conversations between the Slovenian representative to the EU-backed arbitration panel, Jernej Sekolec, and the Slovenian government’s representative to the court, Simona Drenik.

The tribunal was comprised of five judges—one each from Croatia and Slovenia and three foreign judges to decide on the disputed boundary between the two European Union member states. In the conversation between Sekolec and Drenic, which was not permitted, the former revealed confidential conversations among the judges on the court. The conversation revealed that 75% of the Gulf of Piran would be granted to Slovenia, as per its wishes.

The resignation of both Jernej Sekolec and Simona Drenik, further implicated that the phone call indeed took place. The Slovenian prime minister Miro Cerar had urged both of them to take due responsibility.

Croatia has meanwhile warned it may back out of the arbitration entirely. That may mean this could very well end up in a stalemate, ultimately benefiting the Croatian side which, according to the telephone conversation, would stand to lose territorial waters to its neighbour. Leaving it in a state of stalemate would in effect not give Slovenia rights in accordance with the United Nations Convention on the Law of the Sea (UNCLOS).