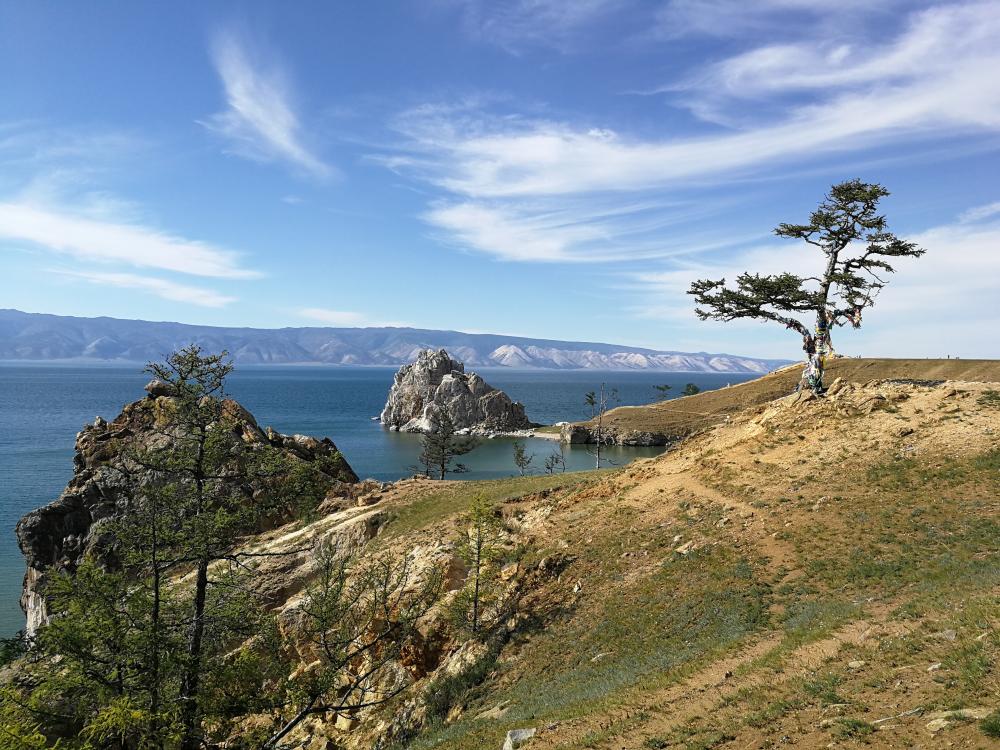 Charlotte (Carlotta) Cotton describes herself as ‘a romantic dreamer, idealist, pro-Europe Brit, child of the world’. A primary school teacher in Madrid, Spain, she often leaves the city during summer holidays for longer travels off the beaten track.

Fast forwarding the time, my body clock gone haywire, I arrive into Irkutsk and its delicious cocktail of architecture, cultures, traditions and peoples.

Flying from Moscow to Irkutsk in Siberia, we move into North Asian territory. Siberia is a world unto itself: it spans an extraordinary 5,493,629 miles, is bigger than Europe, America and Alaska conjoined and yet, ironically, has less inhabitants than London.

I have been propelled into the future (well, by 5 hours of time zone difference) and missed a night’s sleep. In a daze I wait for the first local bus of the day in the cold early morning air, clutching my small rucksack to my chest (“I won’t forget it this time”), then navigate the city to find the hostel shut up and the owners asleep. When I finally enter the hostel, I collapse into my bunk for a couple of hours before heading out to explore the area.

Irkutsk, one of the largest cities in Siberia was once portal for the 18th century expeditions to the far North, including Alaska, and to the East. It has since developed into a renowned industrial and scientific centre. It is a popular stop on the Trans-Siberian Express railway, often as a stopover to reach the majestic Lake Baikal, meaning “sacred sea” in the Mongolian Altai dialect, and just 70km away. 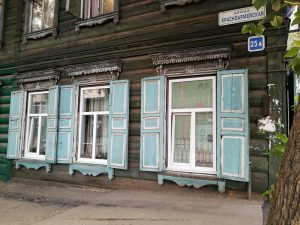 If Lake Baikal is the pearl of Siberia, then Olkhon Island is the heart of Baikal

The following morning I head to Olkhon Island, the jewel of Lake Baikal. It is the world’s largest, deepest and, perhaps, purest freshwater lake in the world. It is believed by the Buryat peoples to be one of the five poles of shamanic energy in the world.

The only foreigner, I jump aboard an ancient local ‘marshrutka’ minibus. Tourists in this region seem to be mostly Russians, a few Chinese and very few Europeans. Communication proves to be very difficult, but then this is part of the fun!

The 6 hour journey is spectacular. We pass tightly knitted timber house villages and sun tinged green marshlands broken up by small patches of pine trees. Bouncing up and down we zoom along straight pot-hole filled roads, stopping only for cows who block us without a care in the world. The driver smokes cigarettes, makes phone calls and writes WhatsApp messages nonchalantly as he hurtles at full speed, slaloming and overtaking other vehicles. 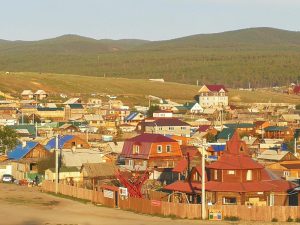 We stop at a roadside cafe laden with wooden tables and benches, its drinks fridges and delicatessen counters empty and with less than a handful of items. Outside sits a statue of a Chinese Buddha symbolising good fortune and abundance.

After a short ride on a small ferryboat, we arrive onto jaw droppingly beautiful Olkhon. Silence reigns in the minivan as we bump along, admiring the beautiful bays, the still turquoise waters, the sun christening the scene, whilst we grip onto our seats.

We stop at Khuzhir, the main village in the West of the island, where I am to stay. I find myself in the charming, eccentric, sprawling ‘Nikita’s Guesthouse’, full of intricately decorated wooden buildings, pretty gardens and incredibly friendly people.

I venture along the bay to the Shaman Rock, one of the nine most holy places in Asia. Unsurprisingly it is the most revered place on the island, a site of legends, rituals and miracles.

13 totem poles stand tall at the entrance, guarding the sacred rock, representing the 13 deities of Olkhon and bearing colourful ribbons, known as ‘Khadag’, placed by pilgrims and flapping in the wind. 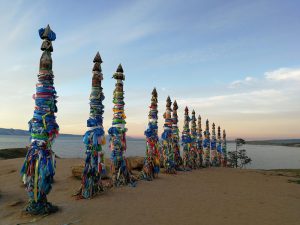 This is a recent ritual and is actually born from a misunderstanding of tradition. ‘Khadag’ are supposed to be presented at Tsaagan Sar (Lunar New Year), and are used for spiritual rituals. Today it is common to see them placed on shrines and hanging from trees (unfortunately and ironically strangling the life out of the latter) both here and throughout Mongolia. The different colours symbolising different aspects of the environment. Blue for the eternal sky, green for the earth, yellow for religion, red for fire, white for milk.

I awake to glorious sunshine streaming through the windows onto a pretty pebble mandala I have made on my bedside table. Time for an adventure, but not before I devour a delicious Russian breakfast of pancakes with lashings of sweet caramel sauce.

Today I choose to venture off the beaten track to the South of the island. Transport on the island is virtually non-existent, but with the help a new French buddy who speaks Russian I flag down a marshrutka on its way to the port, which agrees to drop me off along the road. Waving it off I head onto dirt track, heading deep into nature’s dwellings.

Here birds duck and dive low, coming to say hello, unafraid of humankind. Infinite shades of green turn to different layers of yellow in the golden sun, growing darker with looming threatening storm clouds overhead. Colourful wild flowers in bright blues and pinks, lemon yellows and deep reds, hide in the long grass tickling my legs as they brush past. Large insects, clockwork toy tones, startle my ear. The light ripple of waves turn louder  by the minute and move more intensely as the wind increases. Thin strips of bright white Caribbean coloured sand on the shore sit alongside beautiful eclectic patterned pebbles and stones which I enjoy examining.

Sunk into contemplating Mother Nature’s precious treasures, I manage to leave my mobile phone on a rock as I collect little stones, and find one of the scarce passers-by running after me with it. My guardian angels continue to watch over me. 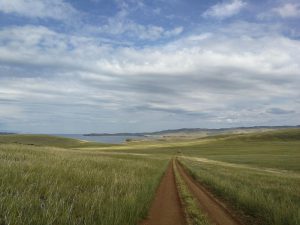 Along several coastlines and beautiful bays I walk in a meditative trance, enjoying the now, experiencing it with all of my senses. Distracted, I ramble off the track, onto rocky unexplored steppe high above the bay. Then I reawaken back into that human fear, watching out for the holes of snakes. (I was bitten by a snake last summer in Myanmar and don’t intend to repeat the experience.)

I also realise that time is passing quickly and race back to the path, along the beautiful coastline and upwards into Scottish highland style pastures, away from the shore to find the main road. I sprint on and on with the intention of arriving before the last ferry for the day arrives, or it will mean a night alone in the cold steppe. My timing is cutting it very fine. I hitch a ride with a friendly couple of tourists from Hong Kong and their Russian guide who have literally just arrived on the island to witness the majestic lake lit up by a flaming red sky countering dramatic clouds as the wind lifts and the waves grow stronger.

As they say ‘red sky at night shepherd’s delight’. And so it is. I wake up relieved to find that the winds have calmed, the clouds moved away and the sun shining splendidly bringing out the perfect blue skies. I have booked a boat tour, (of which there are very few) in an attempt to keep away from the van loads of tourists, all going to the same destinations up North in minivans, and to experience life on the seas. 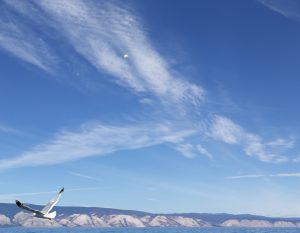 I reach the tiny port, with a couple of derelict stone buildings left to the elements, cows meandering around the shores, a group of friendly French tourists, a couple of brave bathers and ancient wrecks sitting alongside newer brighter boats. Trying to track down my boat is a mission in itself, helped out by some kind locals, I then triumphantly have the vessel to myself with the Captain, or so I think, until we reach the next beach along and pick up the rest of the gang, eight Russians.

Distinctive white triangular mound peaks stand inland across the still turquoise waters. We stop to feed the hungry flocks of seagulls. Above us an enormous cloud in the sky resembles a bird with its outstretched wings. It is as it if is the God of the seagulls in this shaman is looking down upon us. Bumping up and down we glide across the waters, sprayed by the refreshing sea jets. Vast green steppe pastures sometimes inhabited by the odd group of cattle float past. Rows of pine trees sit alongside slivers of white sand, to the sides of steep cliff faces. We pass the site of a prison in the Second World War. It is difficult to imagine how hard that must have been, imprisoned in the treacherous, bleak winters.

I lie on the deck of the boat, relaxing as we zoom along the waters searching for seals which we make out from a distance as they playfully dive down into the lake and up to the surface again. We discerning the form of a man’s head in the cliff face, followed by a heart shaped cliff reflecting itself in the still, peaceful waters. There is not a soul here, save our crew and a small boat approaching. Perfection. 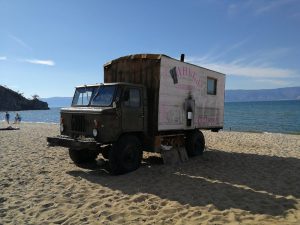 Back at the shore I venture to shaman’s rock and proceed to have a lovely swim in the refreshing (euphemistically speaking) but glorious waters. I would dearly love to have an eccentric Russian sauna in a truck on the beach along, but the owner will allow nothing less than an hour and for a hefty price so I refuse.

I drink in my last Olkhon sunset. Flaming red and oranges paint the sky around pastel blues and darkening clouds, a delicious ensemble. The water makes music of its own as it laps at the shores and gently taps at the rocks. There is an utter stillness. Only nature talks as humans retreat to their abodes. It is only the song of birds and water now. The skies turn darker and the sun bids its final goodbye in citrus fruit tones.

Behind, the full moon raises its majestic head. A billboard, up by the Shaman Rock, reads: ‘Calm down. Make your mind peaceful. Allow the agitated thoughts and feelings to disappear. Reject vanity. Take a look into the depths of your consciousness, for there you are given the opportunity to clearly hear the voice of your heart and the music of heaven.’ I will be sad to leave this very special place, which has revealed its sacred glory to me on this magical evening.

Charlotte (Carlotta) Cotton describes herself as ‘a romantic dreamer, idealist, pro-Europe Brit, child of the world’. A primary school teacher in Madrid, Spain, she often leaves the city during summer holidays for longer travels off the beaten track.

My travel starts with two great Russian cities and not without a bump.