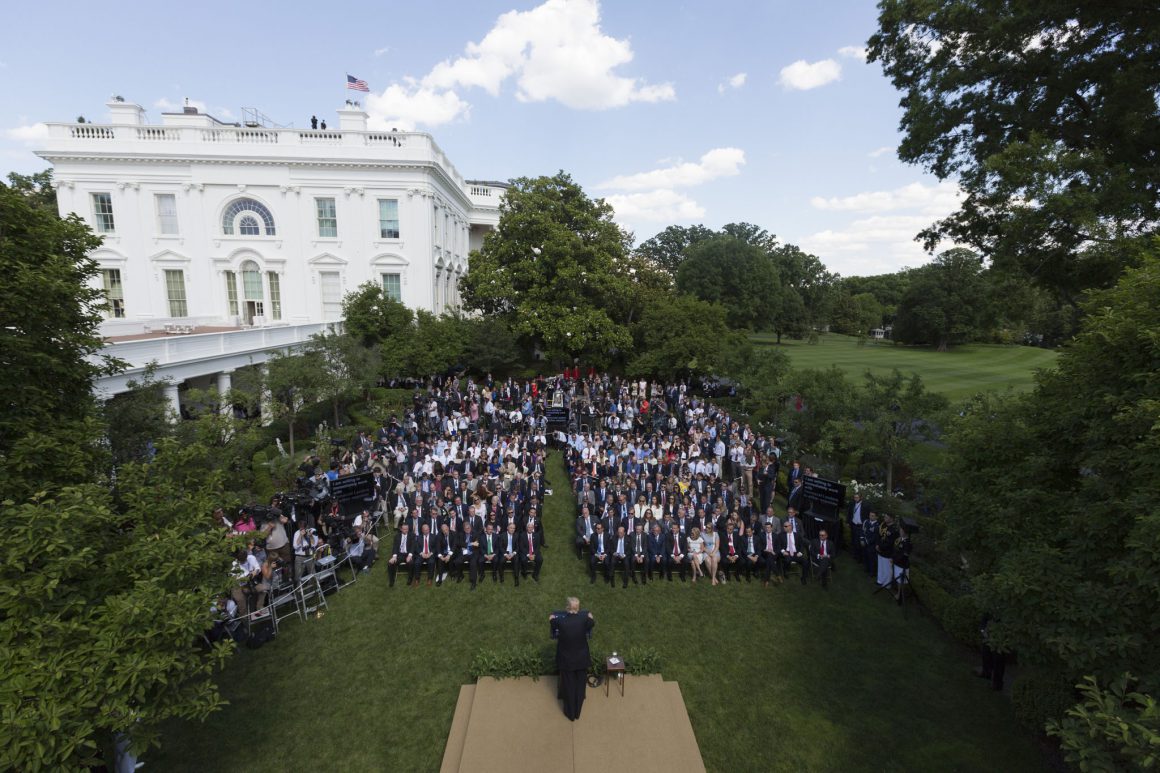 President Trump announces his final decision on removing the US from the Paris Accord in the Rose Garden of the White House on June 1, 2017 (Photo: Joyce N. Boghosian / White House)

Trump’s announcement on 1 June that he would pull the US out of the Paris Agreement signals a dangerous turn in the attitude of “the one remaining superpower” towards global action to tackle climate change and global governance more broadly.

On 1 June President Trump announced the pulling out of the US from the Paris Agreement, which the previous US Administration of President Barak Obama had struggled to shape in a way that would not jeopardise US interests.

We could see this coming, following Mr. Trump’s tense discussions on climate change with European leaders at the NATO and G7 summits of previous days. Remaining hopes that a reportedly more moderate line of thinking in the President’s entourage would prevail were proven wrong. It was an announcement steeped in self-righteousness, isolationist rhetoric and victimhood.

It must be a sign of decline and loss of any sense of broader leadership when the US President addresses only the people who vote for him, less than fifty per cent of his country’s electorate that is, and ignores all the rest.

The technicalities of actually withdrawing from the Paris Agreement are more complicated. According to the Agreement, a period of at least three years has to pass for such a withdrawal to take place. But of course the US Administration can de facto cease to participate and to comply with the contributions it had voluntarily offered to make under the previous Administration, as Mr. Trump’s speech seemed to indicate.

This would be a major upset for the collective efforts to address the climate change challenge. This not only because of the size and overall importance of the US economy but also for the fact that reneging on a deal undermines the very foundation of collective action, according to which all agree together and each does their corresponding part in implementation afterwards. If the US continues to pump CO2 into the atmosphere without making any effort to reduce its emissions, why should Europe, China, India and others do their part or more to save the situation?

The expressed willingness of several US authorities at the state and city level, as well as businesses to deliver their part of the deal might not be possible without regulation and action at the federal level.

There is, of course, the expressed willingness of several US authorities at the state and city level, as well as businesses to make up for this and actually deliver the US part of the deal. However, it is not guaranteed that they can do so without regulation and action at the federal level, nor that they can reliably account for the action they take so as to reassure a fair burden-sharing with the international actors.

Beyond the major upheaval in climate action that this decision by President Trump leads to, the entire rhetoric and the body language of its announcement give grounds for major concern. Mr. Trump is telling his voters that China can still continue to emit more CO2 for a few years, while the US has to reduce its emissions. He also says that the US is doing and will do the best for the environment but cannot be paying the highest bills for all this.

He does not say that the amounts the US but also the Europeans, the Japanese and other developed countries have agreed to pay to the Green Climate Fund are peanuts compared to the benefits of encouraging climate action across the globe and the benefits that the developed countries themselves are enjoying from their technological preponderance, in terms of international trade, control of business and finance, etc.

Trump creates a sense of combined exceptionalism and victimhood that justifies disrespecting any rule.

A key message that Mr. Trump sends to his supporters is that they are victims of a global conspiracy to deprive them of the fruit of their hard labour and have a sort of an inherent right to be on top of the world as the chosen people. He thus creates a sense of combined exceptionalism and victimhood that justifies disrespecting any rule until everything has been recast according to the “America First” principle.

This populist flattering at home and attempted bullying abroad does not augur well. The US was at its best for itself and the world when it practised an inclusive and generous leadership, as it did at the end of World War II. Despite being the unchallenged victor of the war it agreed to share major power status with other powers in the UN Security Council and provided aid to help the losers of the war get back on their feet and rejoin the international community.

Of course, one cannot ignore the legitimate grievances of the average US voter, who has not necessarily seen the benefits of US greatness but sees the taxes they have to pay and the lack of security for themselves and their family. A lot of that, though, should become part of an internal discussion on how the wealth is distributed in the US, how the health and insurance systems work, what is a “good life” beyond overconsumption of often low quality products and a disrespectful attitude towards the Earth’s precious resources. Bringing in the boogieman of a bad world that has ganged up against the US seems designed to avoid this discussion and can only lead to diplomatic, economic and possibly actual conflict.

A world dominated by “America First”, “China First”, “Germany First”, “France First”, and so on can only lead to “solutions” that will set humanity and the planet back by decades, if not centuries.