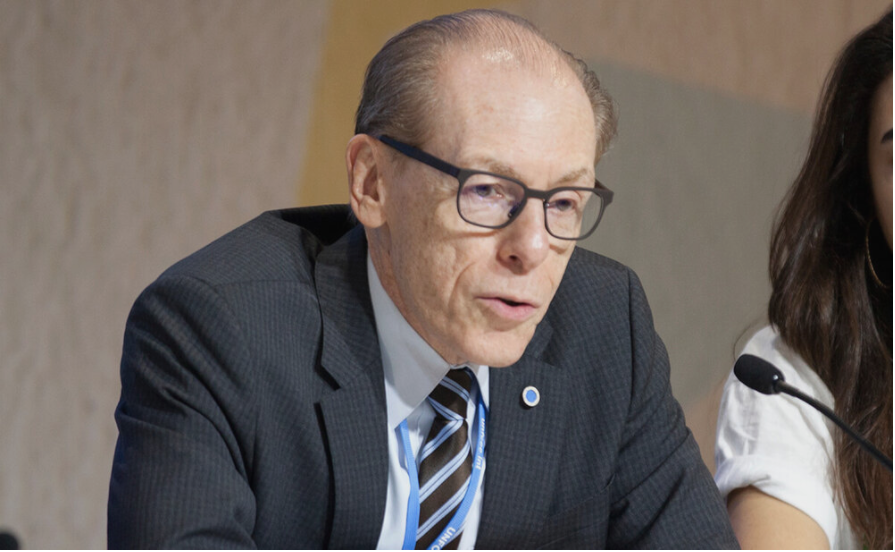 The following keynote speech was delivered by Richard Kinley on 17th June 2021 at the Coalition for the UN We Need‘s online event – ‘Europe and North America Regional Consultation: working together for the world we deserve’.

I was asked to give a keynote on UN multilateralism, for which I’d like to thank the organisers, but I thought that since this is a consultation and it’s really your inputs that matter, what I might do instead of a traditional keynote is to offer some inputs on what I think are interesting crosscutting questions that you may then want to chew on in your parallel sessions, which will come right afterwards.

So, I’ll be offering these ideas based on my 20 years of experience in climate negotiations in the UN which I have to say left me, on the one hand with high hopes and idealism, but also with very few illusions. I would like to touch on three things in this short intervention. First, multilateral institutions and systems – are they up to the task of today? Secondly, the responsibility of governments in this system, and finally the critical role of civil society.

With multilateralism, I think as a starting point it’s pretty safe to conclude that the current multilateral system and our institutions are not really delivering what the world needs at the moment. However, it’s much harder to say what needs to change and, lucky for me, that’s your task. One way I thought, though, to come at the question is through the idea of modernisation.

The multilateral system we are using today was really designed in the wake of World War II, which is an altogether different time and different world. The hallmarks were peace and security but also a very sectoral or compartmentalised approach, which has led to a very diverse range of specialised agencies, unfortunately often competing with one another, which mirrors the situation in many national governments. We also have a situation where the number of issues requiring multilateral consideration in a global world has increased vastly over what was contemplated 75 years ago and some of these are extraordinarily complex and challenging. Mr. Watt mentioned climate change, which I think is the poster child example for these complex issues, but also pandemics, development and equality issues, the management of cyberspace, and not to mention ‘back to the future’ issues where we have returns to the agenda of important issues of militarisation and setbacks in human rights.

So, for me, given all of this, the question is really, ‘how do we reform or modernise the suite of multilateral institutions that we have?’. A number of examples that you might want to reflect on would be things like ‘How can the institutions better enhance multisectoral and all-of-government approaches? How can they work better, for example, on climate change, to all be moving in the same direction?’. Second, how can we put human beings, including our common planet, more at the centre of things and not corporate interests or mythical definitions of economic prosperity? Rather human wellbeing, how can this be at the centre? Perhaps through use of a UN new narrative of hope, respect, and equality, advocated at the highest levels. A third, perhaps more practical question would be, how can modern technology and approaches be better used in the working methods of multilateral institutions? For me, it’s really sad to think that in the early months of the pandemic, the UN institutions virtually shut down, and we can’t have that happen again.

In discussing what needs to change, we also, I think, need to be, while infused with idealism, also realistic. Badly designed or poorly functioning institutions make it much more difficult to move towards the world that we want, so that means we need to fix what we can, and this leads to questions about improving multilateral institutions, not for perfection, but so that they can help move the world forward towards being a better place. I really like very much the Dag Hammarskjöld quote that ‘the UN was not created to take the world to heaven but to save it from going to hell’ and I think that’s a very nice way to think about how we can move practically forwards.

Secondly, I mentioned governments. Here again, I am a realist. Government, or states, in all their perfidiousness, hypocrisy, and self-interest, they are going to remain at the centre of the multilateral architecture and of international cooperation. So, improving multilateral institutions alone is not going to deliver miracles, we need to be realistic because multilateralism works when governments want to use it. I look back on my years in climate negotiations and saw we were able to develop three very successful and different climate treaties over the 25 to 30 year period, but there were also lengthy periods of over a decade when virtually nothing happened, and we are now currently facing a situation where governments need to step up their implementation of what’s been agreed. So multilateral institutions alone are not enough, government accountability and action is absolutely critical.

And here one issue that you might want to think about is ‘is it best to promote all-inclusive multilateral solutions and outcomes and agreements which, by definition, will be less ambitious because they seek to bring everyone into the tent, or is it better to advocate for more flexible approaches (coalitions of the willing) that would allow more ambitious governments to move ahead or, of course, some combination of these two?’. One thing, though, that I think is critical in speaking about governments is that multilateral systems need to do a better job of ensuring accountability and transparency on the delivery by governments of what they’ve promised to do.

One is continuing to develop and promote new visions and ideas that keep us moving towards that better world we aspire to. But critical is the necessity to advocate for these solutions and for this better world at the national level, because governments need to be pressured, they respond to pressure, to mobilisation by civil society and, if necessary, by civil society moving to change governments through elections. [The] fundamental point being that policies of governments and negotiation mandates are set at home, before even going to a conference, and therefore this pressure at home is really critical. It also emboldens governments and gives them the confidence to act. Then, as I alluded to before, the third and critical role of civil society is helping to hold governments accountable for what they’ve said they would do.

With regard to business, I think it goes without saying in the modern times that global and other corporations are indeed important and powerful players. However, despite all the talk of corporate social responsibility, we should not be naive that corporations act benignly. In shaping whatever new institutions and rules, in modernising them, it will be important to, on the one hand benefit from business inputs but, more importantly, be guided fundamentally by public interests.

Before I close, I would just make two general points, for your reflection. Just as World War II, or 1945, provided the inspiration and actually the motivation to design a global order that was based on multilateral cooperation, I think, I hope, we’re at a similar inflection point now. With the seriousness of the climate crisis increasing and with the devastation of the pandemic still very much in play, we have seen recent systemic failures and, positively, we have encouraging signs of awareness, not only in the public but also in governments, that this is an opportunity to intervene in favour of change. So, one can only hope that this is perhaps another San Francisco moment, and I really do hope that the secretary general’s recommendations will reach that level of ambition that was seen in 1945, but for the 21st century.

Secondly, and finally, the European and North American regions have a critical role and indeed a critical responsibility in all of this, and hence you do today, participating in this consultation. As the wealthiest and most powerful region, both in terms of economics and military might, leadership by the countries and the citizens of Europe and North America is essential. But, for me, this leadership means doing and not preaching, it means supporting others, it means advocating and engaging, and it does not mean telling the rest of the world how things have to be. The hallmarks of this leadership are cooperation, respect, and innovative thinking.

With that, I would wish you all a most productive and fruitful discussion and hope that these remarks have been helpful and perhaps even a bit provocative, to get your parallel group discussions heated up. So, thank you very much, it’s been a real pleasure to be here, and good luck.