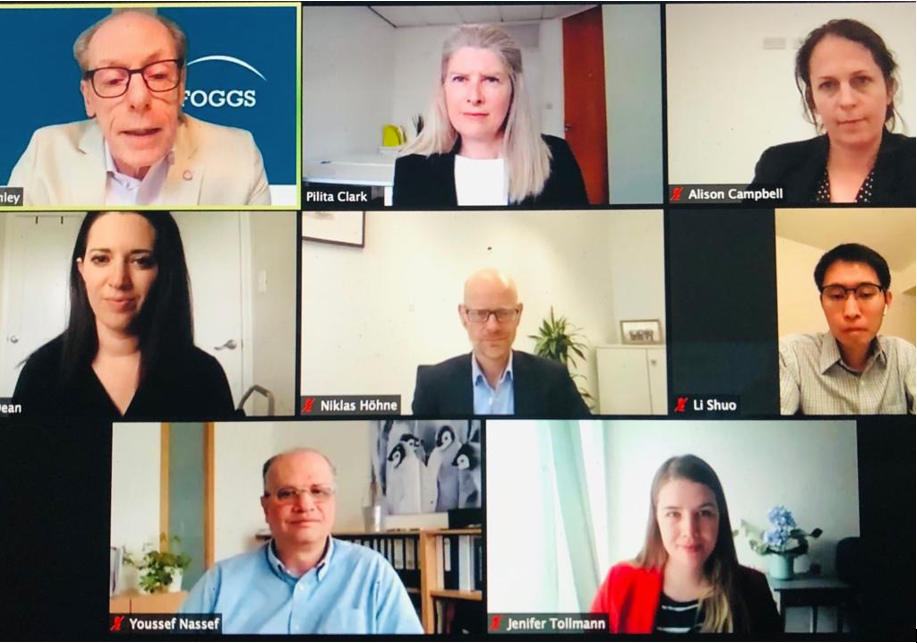 Following US President Joe Biden’s recent Leaders Summit on Climate (22-23 April 2021), the Foundation for Global Governance and Sustainability (FOGGS) assembled a panel of distinguished speakers to discuss the Summit’s most important takeaways, and also to look towards UNFCCC COP26 in Glasgow (November 2021). Pilita Clark, the Financial Times’ environmental editor, moderated the discussion, which produced some very interesting and encouraging viewpoints.

“We are in an emergency. Standing still or going backwards is unacceptable. No single measure will do the trick.” – Prof. Dr. Niklas Hoehne, NewClimate Institute

Professor Niklas Hoehne began by presenting his scientific evidence, which spoke for itself; the scale of effort required to prevent uncontrollable and irreversible damage to our planet and humankind is immense with most countries yet to commit to sufficient pledges to limit warming to 1.5 ºC. However, there are signs of progress. Recent pledges, including those made at the Biden Summit, mean that the predicted global temperature increase has dropped from 2.9 ºC to 2.6 ºC. 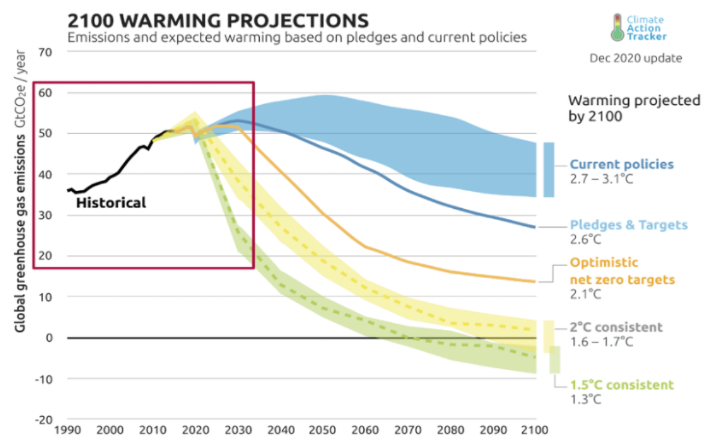 Hoehne stressed that to drive the temperature increase below 2ºC all governments needed to act immediately and implement the pledges they were making in the form of Nationally Determined Contributions (NDCs). The big emitters are key, but political momentum must come also from the low emitters.  Countries who describe their own emissions as “small”, together account for 25% of all emissions, highlighting that all countries need to be part of the solution.

During the Summit, “President Biden made it clear we cannot confront this crisis alone”, said Monica Dean, Senior Advisor at the US State Department, underlining the US shift towards multilateralism for meeting the Paris Agreement goals. With a timeframe of 10 years to enact change, ambition and implementation are urgent.

“The US is committed to rallying the world for greater climate ambition.” – Monica Dean, Senior Advisor, US State Department, Office of the Special Presidential Envoy for Climate John Kerry

The summit signalled the welcome return of the US onto the climate change stage and provided an opportunity to showcase the climate change leadership of the Biden-Harris Administration. A long list of initiatives had been undertaken since assuming office, including re-joining the Paris Agreement and plans for net-zero greenhouse gas emissions by around 2050.

The US were not alone, as many of the 40 world leaders who participated in the Summit also presented their plans for drastically reducing greenhouse gas emissions, including by shifting their energy systems from fossil fuels to zero-carbon sources. While baselines vary, by 2030 Japan will cut emissions by 46-50%, Canada by 40-45%, UK by 78%, US 50-52%, and Brazil is to reach net-zero by 2050. Clearly, much more is needed than the current pledges but the hope was that they would serve as a catalyst for the slow movers to correct their “ambition gaps” and submit bold NDCs before Glasgow.

Another positive indicator that the panellists highlighted was the cautious optimism flowing from the meeting between US Special Presidential Envoy John Kerry and his Chinese counterpart, Xie Zhenhua in the week before the Summit. Li Shuo, from Greenpeace East Asia, saw the trip as a diplomatic success that provided “a basis for these two countries to work together in the future, and that’s not something that we could simply take for granted, given the very contentious nature of the bilateral relationship.” Dean and Li agreed that climate change has emerged as a “stand-alone issue” in foreign policy, with both countries clear that action is needed now.  Despite these perceived positive initial steps, Jennifer Tollmann, Senior Advisor at E3G, cautioned that “just looking at that relationship between the US and China is not going to give us any measure of success at the COP”.  She stressed that wider alliance-building over the next six months was what would “make or break” COP 26.

One issue that was raised throughout the discussion was that of coal, with Richard Kinley, President of FOGGS and former Deputy Executive Secretary of the UNFCCC, noting that “it is scandalous what is happening with coal,” and Li Shuo stating, “if we don’t tackle coal, there is no climate solution.” Understandably, this remains a major barrier to 1.5 ºC ambitions and will require collaborative solutions and bold decisions, especially from China. Li joked that “you’re going to burn money” if thinking of investing in coal in the future and Hoehne lent a further note of optimism, in that inexpensive renewable energy technology is advancing so rapidly that any new coal fired power station would not run economically.  Whether or not coal can be phased out quickly enough, though, is still unclear, given the power of vested interests.

“If we are serious about 1.5˚C, we need to end oil extraction, and coal use, and do something for communities suffering from the transition” – Prof. Dr. Niklas Hoehne, NewClimate Institute

An area the panellists noted where international cooperation is still lacking relates to carbon pricing, which was one of the most contentious points of the previous COP (COP25) in Madrid.  Pricing was not mentioned in President Biden’s statement, and President Xi warned developed countries to not implement green trade barriers, namely a carbon border tax. There is nonetheless a recognition that financial instruments are key to the transition, with Hoehne reminding us that one benefit of these is that new revenues are generated and can be reinvested.  An open-mindedness in relation to negotiating such matters remains, and there is great potential, but many questions need to be worked through on issues surrounding scope, levels and revenue use.

Another important feature of the momentum-building process is how successful the UK’s COP26 Presidency can be at galvanising countries to work together before and at Glasgow.  The UK views itself as a climate leader and will use its role as COP President to maximise potential outcomes.  Alison Campbell, Deputy COP Envoy from the UK COP 26 Presidency, explained the UK’s four primary objectives: leaving Glasgow with 1.5ºC within reach, a major push from countries towards implementing adaptation polices, climate financing commitments from donor countries reaching $100 billion, and a collaborative effort to finish the Paris rulebook to give countries confidence to enhance implementation.

“We need to use each ‘political moment’ to help push forward toward the goal.” – Youssef Nassef, Director, UNFCCC Secretariat

Political moments in the run-up to a COP build momentum and are key, and the ambitions of the UK Presidency are also highlighted by the diplomatic effort that is already underway.  Campbell cited the UK’s G7 Presidency, the Commonwealth Summit and the UN General Assembly as key dates in the run-up to November, paralleled by the UNFCCC’s own programme for 2021 including The Climate Adaption Summit, the Ministerial on Climate Action (MoCA), and the 12th Petersberg Climate Dialogue.  Building political momentum is vital and spotlighting the climate crisis on the international stage, especially with leaders, must be utilised in a way that builds collaborative efforts towards outlined goals.

Of course, the impact of the Covid-19 pandemic and the subsequent fiscal crisis cannot be ignored when discussing COP26.  Nevertheless, the panellists raised some interesting points.  Campbell affirmed that the UK is working towards an in-person event.  She noted “we can’t put one crisis on hold to solve another,” however, “the response to one can help another.” And whilst we still need to draw lessons from the Covid-19 crisis about resilience and sustainability, the crisis has undoubtedly put “Mother Earth” and how are we treating our planet into the spotlight.  Youssef Nassef, a senior official with the UNFCCC Secretariat, echoed this sentiment. Due to the Covid crisis, many of the preparatory meetings culminating in Glasgow will be held virtually.  By allowing those who cannot attend COP26 in-person to participate remotely instead, COP26 “could end up being the biggest COP in history”, he noted.

“Civil society is not periphery at these meetings” they “help translate the process and kind of pass it onto our local communities, into the government, into our media landscape, so civil society at COPs is not just side events.” – Jennifer Tollmann, Senior Advisor, E3G

If COP26 does prove to be the biggest in history, this will largely be down to strong participation from non-state actors, which include business and investor communities, high-tech enterprises and CEOs from multi-million-dollar corporations. They have broadened the messaging by focusing on the financial benefits of cutting emissions and forging partnerships in solution-seeking rather than shaming. This “alliance-building is going to make or break COP26,” said Tollmann.

Exactly how the private sector and civil society would take part in Glasgow was still unclear, but Kinley noted their “mobilising” effect, and Nassef highlighted their vocal opposition to the slow pace seen at COP25 in Madrid.  The reality of lobby pressures on governments cannot be ignored, and the role of business in implementing new NDCs will be key to their success, therefore it made sense to ensure an active role for them in Glasgow.

As the panellists explained, there is a constant need to pressure governments to improve and then make good on their NDCs. The implementation of such policies will ultimately determine whether the 1.5ºC target can be reached or not.  It was encouraging to hear some optimistic echoes from the UNFCCC, national governments and the scientific community, but the overwhelming message is that there is still a GREAT deal of work to be done.  The momentum is building as Glasgow approaches, but it remains to be seen whether the optimism displayed can come to fruition where it really matters and in time.