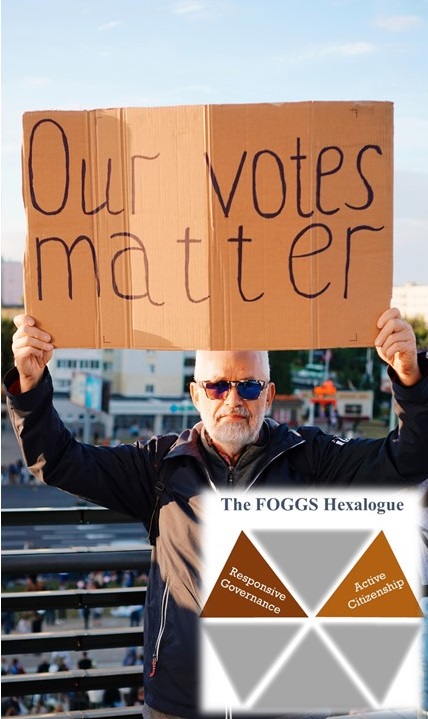 On this International Day of Democracy, we at Katoikos and FOGGS wanted to take this opportunity to discuss the Hexalogue and its connection to global democracy. While all six components of our moral framework are important to creating a new global narrative, two stand out as being particularly relevant to the day’s festivities. In order to function properly, democracies require Responsive Governance and Active Citizenship. While there are many other factors that can impact the outcomes of specific government policies, these two concepts from the Hexalogue lay the foundation on which faith in and commitment to a democratic system of government is built.

The principle of Responsive Governance calls on a government to always be in service of the people it represents. This responsibility comes in many forms, from respecting the freedom of speech by providing forums for citizens to express their views to ensuring transparency by providing open and accurate information about how the government operates. By ensuring that there is a consistent exchange of information between the government and its citizens, governments can better align their policies with the will of the people they represent.

However, the burden of maintaining democracy does not lie solely with the government. Individual citizens must remain consistently engaged with the world around them. Active Citizenship requires citizens to utilize the information available to them to gauge how well their representatives in government are reflecting their needs. Individuals should look at the results of past policies as well as the potential impact of new proposals. If the government is failing to address the concerns of the people, citizens must take an active role in seeking redress. Peacefully protesting, contacting representatives, and ,of course, exercising the right to vote are all viable ways to ensure that one’s voice is heard. By staying informed and utilizing every opportunity to make their voices heard, every citizen can have an impact on their government to ensure that it remains responsive to those it represents.

As we continue to build the Grand Narrative for a better world, it is important that we remember the role both governments and citizens play in bringing about positive changes in the world. Democratic systems of government are the most responsive form of governance, and provide the widest range of options for citizens to actively engage with their leaders. On the International Day of Democracy, we call for all nations to embrace the ideals of democracy and encourage all global citizens to remain active and engaged in the pursuit of a better world.

To learn more about the Hexalogue and its applications, visit https://www.foggs.org/1589/the-foggs-hexalogue-annotated-version/