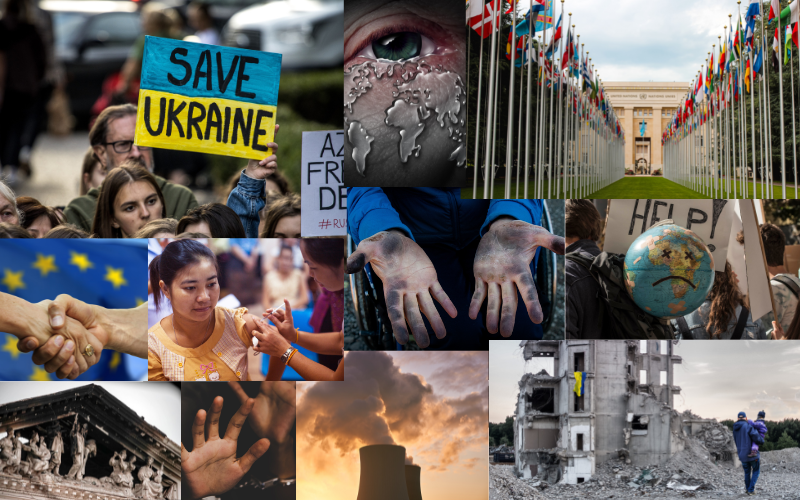 Two weeks from the finish line, 2022 can safely be said to have been a year of conflicts, tensions, and upheavals par excellence. The Russian invasion of Ukraine on 24 February may still be the darkest highlight of the year, but certainly not the only one. Some hopeful signs with ceasefires that held/are holding in Ethiopia and Yemen, offer limited solace, in view of continuing wars in Mali, the Democratic Republic of the Congo, Myanmar, and other places. In terms of high-stake geopolitics, tensions between China and the US over Taiwan and the Southern China Sea are also a source of major concern, connected closely as they are to the possibility of direct superpower confrontation and even nuclear war, as is the case between Russia and the West too.

While the COVID-19 pandemic is hopefully subsiding, its impact on the world economy is combining with that of the war in Ukraine and the sanctions against Russia, plus speculation in shares and commodities, to cause destabilizing inflation with exorbitant energy and food prices, another debt crisis in the weaker economies, and widespread insecurity across the world. Economic, social, environmental, and political causes merge to produce explosive domestic unrest in places like China, with the “Zero COVID” policy as the immediate cause, and Iran, where massive protests by women and youth have been sparked by the death of a young woman in the hands of the Morality Police a couple of months ago. Accumulated frustrations among countries and population segments within countries are of course at the root of what is happening in this new season of widespread discontent.

Even in the privileged West, labour action is increasing, in view of rising inflation that further undermines the purchasing power of the large majority of citizens, with inequalities continuing to grow, as they have been doing in recent decades, and the super-rich cutting costs to increase even more their profit. “Culture wars” in increasingly divided societies play out through the rise of xenophobic governments that do not tolerate dissent, while conspiracy theories and misinformation abound in cyberspace. As for climate action, it is caught up between the need for ready and affordable energy and heating almost at any (environmental) cost, and the backtracking on promises for significant funding to developing countries for climate action and reparation for harm done.

We could continue the painting of the bleak picture of our world today, but the real purpose of this editorial is not to mark the end of the calendar year with doom and gloom but to renew hope for the start of the new year. We believe that in the recent negative experiences there exist several lessons that if heeded can help set the workings of societies and the international system on a more solid footing for the medium and long term. What could these lessons be:

The Russian government could have used such means to air apparent grievances about the treatment of the Russian-speaking population in Ukraine, as well as regarding its perception of being encircled by NATO. Resorting to aggression and invading a sovereign country was a major mistake that can lead to no legitimate results and must have economic and legal consequences for the aggressor.

At the same time, from the side of Ukraine and its allies, excluding any possibility of discussion and insisting on a fight to the end, which may prove bitter for the whole European continent and even the world if it goes nuclear, is probably not the most productive way to proceed for the medium-term.

One should not expect the Ukrainians who are defending their country and their lives to immediately agree to talks. Preparing the ground, though, for an eventual cessation of hostilities, troop withdrawal, and talks for a peaceful settlement should be high on the agenda of third actors, notably the UN and its Secretary-General. One way this could be pursued is put forward in the Armistice Call proposed by FOGGS and endorsed by former world leaders.

The Iranian authorities could have probably averted or softened the public anger, protests, and deaths if they had investigated the death of the young woman, JIna Mahsa Amini, in police custody on 16 September 2022 and had brought the culprit(s) to justice. The handling by the US authorities of periodic social unrest in their country because of excessive police violence, especially towards minorities, is a good practice one can learn from. It does not solve all problems, as there is a lot that comes in the open through such a trigger – from the rule of law, social and regional cohesion, gender issues, the economic and broader state of young people, and more – but an approach that acknowledges wrongdoing and makes amends can help with de-escalation and opens space for peacefully dealing with the rest.

At the same time, protesters, from the family of the initial victim to other individuals and civil society organizations concerned, could have used all legal avenues at their disposal to pursue the case and ensure a fair investigation and prosecution of the culprit(s). Was this tried, and/or did those connected to the victims realistically have a chance to have their case reviewed objectively by the administrative and legal system of the Islamic Republic?

As for groups and countries outside Iran, it would have been helpful to demand a fair investigation, propose good practices and offer good services, rather than instantly politicizing the situation and threatening sanctions. The recent decision by the UN Human Rights Council to establish a fact-finding mission to Iran moves in this problem-solving spirit. Of course, at this stage, one must take into account many more deaths that have been added to the initial one, because of bad handling of the situation by the Iranian authorities and escalation.

Urgently needed is a sane approach that would focus on the problem at hand each time and not on geopolitical or ideological differences, international or domestic stereotypes, or partial interests. All involved in these situations – and we are literally all involved, in one or the other way – need to keep sight of the end goals that are professed and could unite but are often not adhered to: individual well-being and societal resilience, with rights and responsibilities, for the provision of common goods.

The United Nations, its intergovernmental organs, and its Secretary-General have a central role to play in such problem-solving exercises, from spreading a positive narrative of peaceful coexistence to fact-finding, naming, and saving (better than shaming, if the latter can be avoided), facilitating and enabling.

We very much hope that the new year’s resolutions of leaders, intergovernmental and civil society organizations, companies, and individuals will be along the above lines.