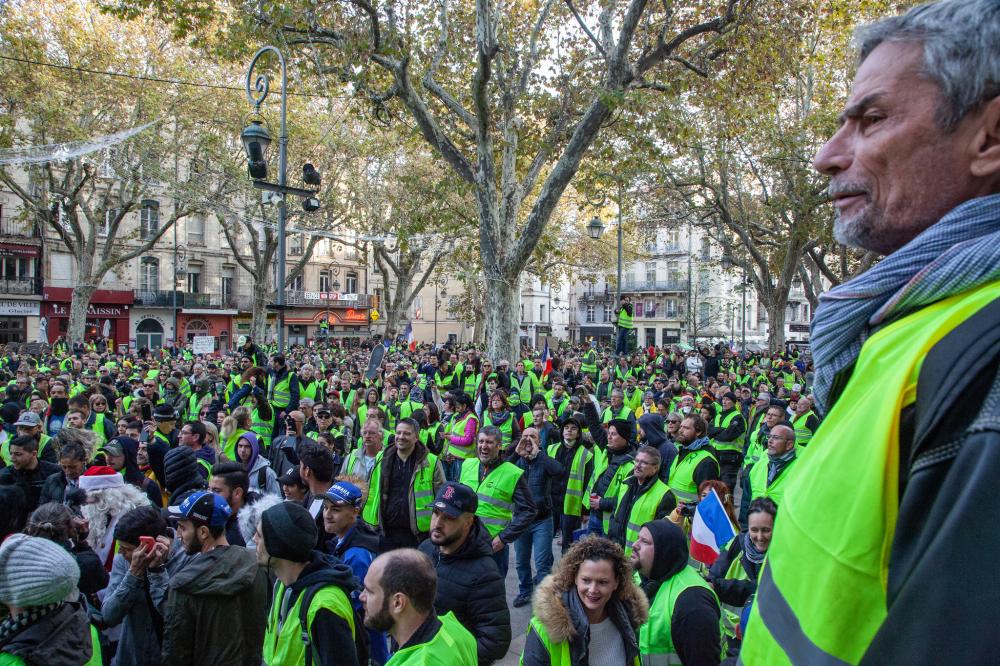 The violent protests by gilets jaunes should be condemned, but the grievances expressed are legitimate. Protecting the environment should not be used as an excuse for more neoliberal policies.

For several weeks thousands of French citizens have been protesting on the streets of Paris and all around the country against President Macron’s plan to further increase the tax on gasoline. The aim is allegedly is to deter the use of fossil fuels that create CO2 emissions and thus contribute to intensifying climate change. The “gilets jaunes” (French for “yellow vests”) decentralised movement has become increasingly violent, expressing popular discontent also for other policies of the government, some of them related to the environment and some to the broader economic reforms meant to make the French labour market more flexible.

At Katoikos we favour in principle environment-friendly policies, because we consider them to also be in the interest of people. Perhaps more than anything else the environment is a crucial factor for our well-being. It is thus not a matter of protecting the environment for its own sake but of keeping it in a good enough state to sustain human life and allow for the fulfilment of human needs, for present and future generations.

The danger we face from climate change, pollution, desertification, resource scarcity and the resulting deadly conflicts is that they can eventually destroy homo sapiens, our species. The Earth, on the other hand, will slowly but surely recover from the destructive human intervention, even if it might take it thousands of years. Compared to the planet’s billions of years of existence both humanity’s impact and the recovery from it will be momentary blips.

If Mr. Macon and his government really want to have a positive impact on the environment, they should find better ways of introducing legislation that encourages environmentally friendly practices. This can be done without putting additional burden on people, especially those not so well off in rural areas, who need their cars and tracks to move around.

If big polluters get taxed appropriately, while assistance is given to the middle and lower-income classes to transition to more sustainable practices, along with infrastructure and capacity building, that would be a different ball game with a lot more legitimacy. But such initiatives are almost unthinkable in a neoliberal economic model that unfortunately seems to be guiding Mr. Macron’s actions too.

When it becomes clear that people and nature are in the hands of economic interests, which appear to have captured the political space too, then one understands even better the frustration of people and their desperate protests. Violence is certainly not condoned and resisting all changes in the economy may not be very productive mid- to long-term. However, the average citizen at least deserves a clear explanation of the reasons for any measure as well as mitigating actions that improve her or his condition.

Climate change and other emergencies related to the environment can only be dealt with when a vast majority of humans joins forces to bring about changes to their lives: production and consumption patterns, the economy, society and governance. Such a consensus would involve a lot more than scientific prescriptions or political declarations. Leaders, negotiators and experts gathering in Katowice, Poland, for this year’s UN climate change conference should keep that in mind.

If that does not happen, large numbers of people will feel legitimised to think that climate action and the green or blue economy are being used by those already in a dominant position to appropriate an even bigger share of our world’s resources, to ensure their economic Heaven, while the rest of humanity is relegated to Hell.

The Conference of the Parties (COP) to the UN Framework Convention on Climate Change (UNFCCC) is an annual event that has been attracting increasing attention in recent years, as the impacts of climate change intensify and are now visible virtually to all. The latest UNFCCC COP is taking place in Madrid, Spain, from 2 to…

.…And it is not just because of climate change. Increasing unrest around the world shows a deep dissatisfaction of large numbers of citizens with unpopular decisions and corruption that the ruling classes are engaged in. It is not just a new Arab Spring, although it is expressed in the Arab world too, notably Lebanon, Iraq…