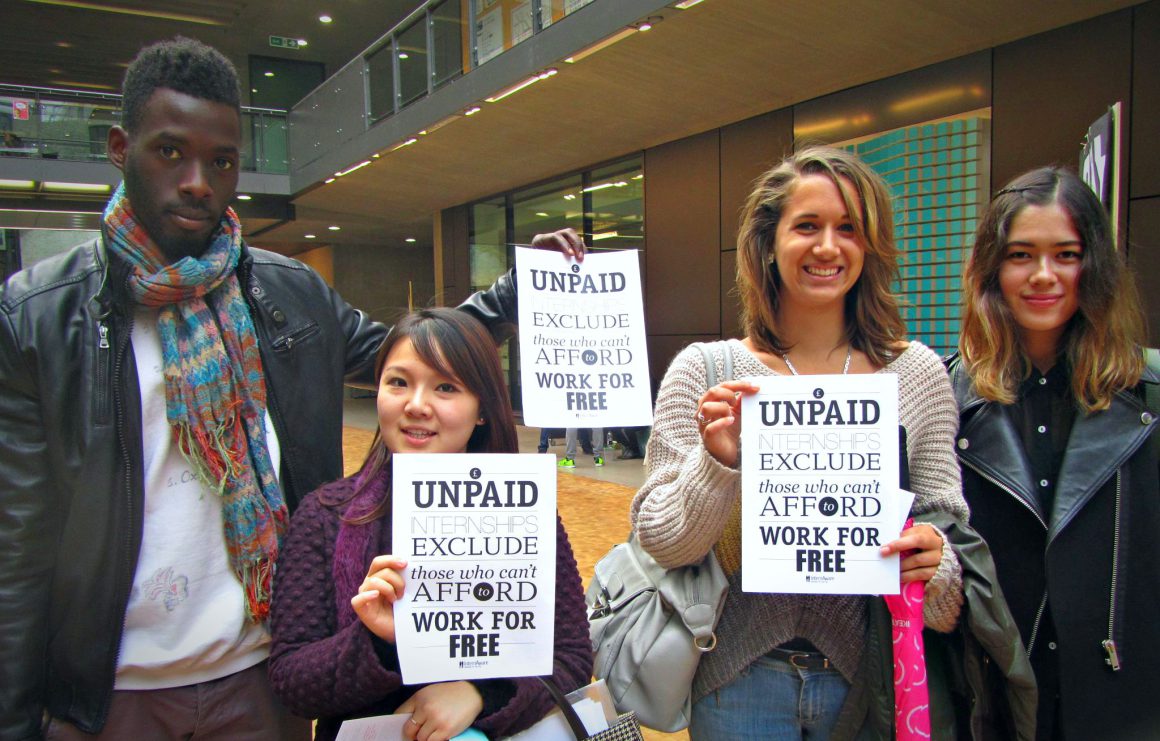 Faced with an increasingly precarious job market, young people are willing to give more for less. This is being exploited with a rise in unpaid internships.

“Able to handle multiple tasks under strict deadlines”, “devotion to work late hours when needed”: these were some of the criteria for a three to four month internship in Brussels, completely unpaid, that I applied for directly after receiving my Bachelor’s degree.

I wanted to kill some time before starting my Master’s degree, and I thought an internship would be a good opportunity to gain valuable work experience an expand my contacts’ network. The description of the responsibilities included “assisting in the organisation of events”, “writing summaries and comprehensive report” (sic),“data management”, “office management”, and so on. It sounded promising, albeit demanding. Directly after the interview, I was “hired”, so to speak.

After leaving the “job” early with a profound sense of unfulfillment, I grew increasingly critical about the internship industry as a whole.

Four months later, after leaving the “job” early with a profound sense of unfulfillment, I grew increasingly critical about the internship industry as a whole. To refer to it as an industry sounds silly, but in the post-crisis era we are increasingly faced with organizations that hire interns as replacements for paid entry level employees, inexorably demanding desperate students and graduates to invest all their time and energy to do tasks that provide little in terms of valuable work experience.

More recently, having gained a stronger sense of what I want for myself and what I’m willing to accept from others, I declined an unpaid internship that required my presence for at least four days a week for six months and required that I work in the cafeteria at least once a week.

The fact that a company that earns millions a year has the gall to demand unpaid interns to do work that really would best be done by paid cafeteria staff is astounding to me, but maybe this is becoming the new normal as employers are increasingly undermining the potential of educated youth in a race to the bottom. The harsh reality is also that there will always be someone who is willing to do the unpaid work that others would decline.

I don’t want to give you tips about how to get an internship position or how to write a good cover letter. I do want to emphasise the growing phenomenon of unpaid internships that might look seductive as a line in one’s CV but ultimately offer little by way of a learning experience and exacerbate competitiveness and inequality in an already precarious job market.

Unpaid work in organising a conference on unemployment

The organization that I interned for set up conferences in Brussels on a variety of topics, one of which concerned the issues facing the European job market and unemployment. The conference was held in the affluent four star Silken Berlaymont Hotel, and my job that day was to welcome delegates and speakers and take notes.

At this stage I was a few weeks into my internship, and I was already growing cynical and exasperated with the amount of work I was doing for no pay, or at least with no sense of personal benefit to me. I remember sitting in a corner that day during the conference, taking notes as I was asked to do, while one of the hired speakers, Professor Mike Campbell, was describing the growing phenomenon of unpaid internships in Europe, in the context of the fact that many youth have trouble finding employment.

During the discussion session, I fantasized about raising my hand and announcing – like one would do in a dramatic scene of a badly scripted film – that I was myself an unpaid intern for the organization that was hosting this very conference about employment issues. Instead, I kept quiet, and stood politely by the door when the session ended in time for a stiff “networking lunch” break.

My internship experience was a disillusioning one. I have learned about the prevalence of internship positions that seem to exist primarily as a means for organizations to cut costs and hire free labour. Unpaid internships are becoming more common, especially in the aftermath of the economic crisis. Many employers require their interns to do “real” work, in the sense that they are indispensable to the functioning of these organizations.

Too many interns receive no rewards in return for the work they do, whether in terms of financial compensation or as a fulfilling learning experience.

Of course, one learns by doing, but there is only so much energy that one can invest in an organization (especially those that receive generous funding and/or financial profit) for free before one feels exploited.

This counts not only for the amount of effort that one puts into their work, but also the quality of the work that interns are asked to do; it is doubtful that making two hundred badges for conference attendees, or working in a cafeteria, will teach me much about working in a non-profit organization. Ultimately, too many interns receive no rewards in return for the work they do, whether in terms of financial compensation or as a fulfilling learning experience.

Given the competitiveness of the job market, many young people are already happy to have a line in their CV and a letter of recommendation for the months of valuable work that they do. But young people are getting the short end of the stick: while organizations continue to benefit from the labour that youth are willing to offer for little to no reward, finding a stable, paid job is becoming increasingly difficult.

We are the boomerang generation: vacillating between living independently, and depending on our parents for support because of the precariousness of the job market. If you have the “privilege” to be able to rely on your parents financially in the first place, that is.

Formally speaking, according to Eurofound, an EU agency devoted to the improvement of working conditions, an internship is legally required to meet the following criteria:

It is easy for employers to bypass these regulations.

I remember in the agreement that I signed for my internship, it explicitly states that I am “not an employee”. For another internship that I did after graduating from secondary school, I signed a “volunteer contract”. It goes without saying that a contract for a volunteer is absurd; volunteers, by the simple fact of being volunteers, have no obligations towards the organization they are working for. Yet a growing number of organizations are officially hiring interns as volunteers. By doing so, organizations can further avoid the responsibility that involves having employees; “volunteers” are not legally required to be paid, or even have their worker’s rights respected. After all, they’re volunteering, aren’t they?

Interns are not volunteers

The activist organization, Intern Aware, which protests the exclusionary nature of unpaid internships, makes a clear distinction between internships and volunteering. Volunteering, they state,involves a person working on their own terms; they volunteer their time when it works best for them and are not required to undertake certain tasks or meet certain standards of performance.

Interns, like employees, are monitored by their bosses and are given a set of tasks to complete within a certain time frame and a certain set of standards. For this reason, Intern Aware argues that interns should be paid like regular employees.

The blurring of the boundaries between volunteers and interns is dangerous and allows organizations to avoid meeting the legal standards for working conditions. Interns can thus work for several months at a time with no pay, undertaking mundane administrative tasks, and receive no legal protection as workers.

At the very least, interns should be left with a sense of having learned something fulfilling from their experience, and should feel that they have made a valuable contribution to the organization. Ideally, they should be treated as potential employees, in which as a reward for their commitment, the organization also commits to them.

Internships should provide experience, yet they require one

I continued my unpaid internship for four months, being fully aware of the competitiveness of the paid job market and hoping it might benefit me in the long run. However, the internships themselves are becoming increasingly difficult to get.

About thirty other people applied for the internship position that was unpaid and involved long working hours. I guess I should consider myself “fortunate” to have gotten it. Internships that are less demanding or provide even the slightest compensation are even more competitive.Even though the purpose of internships is, as mentioned above, to provide training and experience to fresh graduates just entering the job market, I noticed that many internships require prior work experience. The fact that the requirements for internship positions are so high shows that many internships exist for the benefit of the organization, even though internships should benefit the intern before anyone else.

You might be thinking that if people are willing to work for free, let them. After all, this is something they “signed up for”, and you can always make the choice to leave if you are not happy with your internship experience. Yet in the present job market, in which several extracurricular activities and at least one or two internships are required to meet the minimum standards of a few entry-level jobs, what does it really mean to have that “free choice” to work for free?

Sure, we could make the choice to not compete altogether and accept our fate as low-paid workers. Many people are happy with doing more basic, less ambitious work. But should we really accept this as our only alternative?

Unpaid internships exclude those who cannot work for free.

We also can’t ignore the wider impact that unpaid internships have for society as a whole. To quote the slogan for Intern Aware, “unpaid internships exclude those who cannot work for free.” In other words, there is nothing meritocratic about a system that only works to the advantage of those who can live on savings or support from their parents for several months at a time.

One might also wonder what it means for society if potentially great minds have difficulty competing in the job market because of the necessity to have done unpaid work in order to compete for a paid job. The bottom line is, unpaid internships contribute to the growing gap between the rich and poor.

This article was originally published on Kaitlin’s blog.

Delivery companies exploit an invisible precariat. Now, against all expectations workers are mobilizing across borders to claim their rights.