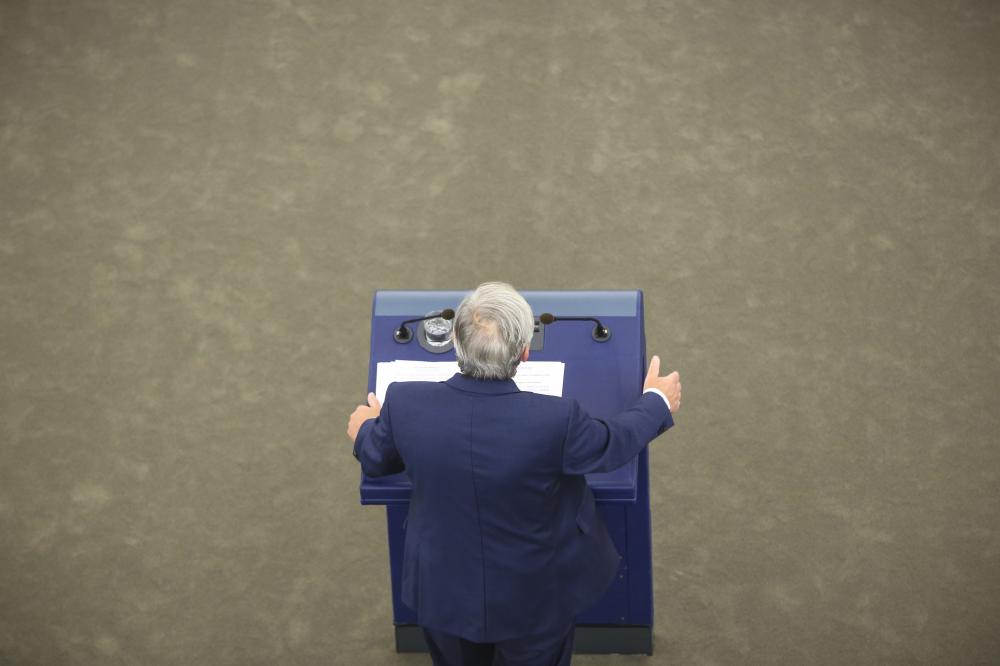 The State of the Union statement by Jean-Claude Juncker, President of the EC, in front of the European Parliament in Strasbourg (Photo: European Union 2017, EP)

Petar Marković is an Erasmus Mundus Joint Degree PhD Fellow of the Globalisation, Europe, Multilateralism PhD School at the Université Libre de Bruxelles & Libera Università Internazionale degli Studi Sociali LUISS in Rome. At the moment, he is a visiting scholar at St Anthony’s College at the University of Oxford. He previously worked as Teaching Assistant at the University of Donja Gorica in Montenegro and the Centre for European Integration of the Belgrade Open School in Serbia.

European Commission President Jean-Claude Juncker delivered his State of the European Union speech on Wednesday. Contrary to what might have been expected, his address did not abound with lamentations regarding Brexit, minutiae of the economic crisis-management or the resurgence of the right in the European East. To be sure, this triumvirate of issues that cloud the Union were tackled, but swiftly and with determination – only to give way to a different tone.

The head of the Union’s executive was not, this time, reminiscent of Orpheus that looks back at his EU-ridice.

Surprising many, the head of the Union’s executive was not, this time, reminiscent of Orpheus that looks back at his EU-ridice but demonstrated a clarity of vision for the post-Brexit EU and presented an ambitious roadmap for its attainment. He captured a fresh forward-looking mood that seems to settle in, now that the fears of the collapse of the Schengen area, the euro or even the EU itself have subsided. No one was ready to see this technocrat to manage to translate this mood into operational ideas and leave the European Parliament in Strasbourg a statesman, albeit one without a state.

True politics is about asserting oneself as a player on a common stage (Rancière). When that stage is populated by nation-states, the EU has to appear strong and intelligible to its citizens in order not to be perceived as the odd one out. It is also about acting, through word and deed, rather than merely reacting, in order to create something new and extraordinary (Arendt).

So what is this novel vision for the once-again EU27? The title of Juncker’s “Roadmap for more united, stronger and more democratic Union” is indicative. We are told that immediately after the UK leaves the Union in 2019 an extraordinary summit will take place in Sibiu, Romania, where unanimity on the future of Europe would be sought in order to pass a series of reforms. In a nutshell, the time has come for convergence.

Firstly, and by far most importantly, there’s Juncker’s outright rejection of the idea of a two-tire or multi-speed Europe, which has gained traction both among practitioners and in the academia. If he has his way, there will be no institutionalization of the core-periphery partition on the continent and no “second class” citizens of the EU.

Secondly, the transnationalization of the elections for the European Parliament would be unlocked via the introduction of continent-wide lists and strengthening of the Euro-parties, so that this body would truly represent the citizens’ European interests, just as their national interests are represented in their national parliaments or the Council of the European Union.

Thirdly, and quite unexpectedly, Juncker proposed to merge the presidencies of the European Commission and the European Council. so that the Union would be “easier to understand if one captain was steering the ship”.

One can already see a Eurosceptic outcry against this seemingly federalist idea, which would assimilate the anatomy of the Union to that of a state. Yet, at base, it is nothing of the sort. The two bodies, their institutional tasks and functions remain separate. It is only that the citizens would have one less president to remember in the still overwhelmingly complicated constellation of EU politics.

Furthermore, this measure is not without precedent since we have already witnessed the prior roles of the Commissioner for External Relations (dealing with Brussels-based competences such as trade) and the High Representative for Foreign and Security Policy (purview of member states) be joined under the double hat of Ashton and, later, Mogherini.

The extraordinary about Juncker’s plan is that it does not require opening the Pandora’s box of treaty change.

The extraordinary about all of the above measures is that they do not require opening the Pandora’s box of treaty change. The EU constitutional make-up would continue to be a tertium genus, something between an intergovernmental organisation and a state. The Lisbon Treaty would continue to equally protect both those who dread more Europe and those who would relegate the nation-state to the past.

To use the Aristotelian parabola of a polity-as-ship, as Juncker himself did several times yesterday, these measures allow for a more democratic and accountable EU, able to navigate the narrow waters between nationalism and supranationalism.

Moreover, this roadmap is remarkable because it can instil the much-needed confidence that frailty is no longer the condition of the EU but of those who do not evolve with time. And in the end, the following open question lurks: Can the crew achieve this with the illiberal fifth column among its 27 members?

Petar Marković is an Erasmus Mundus Joint Degree PhD Fellow of the Globalisation, Europe, Multilateralism PhD School at the Université Libre de Bruxelles & Libera Università Internazionale degli Studi Sociali LUISS in Rome. At the moment, he is a visiting scholar at St Anthony’s College at the University of Oxford. He previously worked as Teaching Assistant at the University of Donja Gorica in Montenegro and the Centre for European Integration of the Belgrade Open School in Serbia.