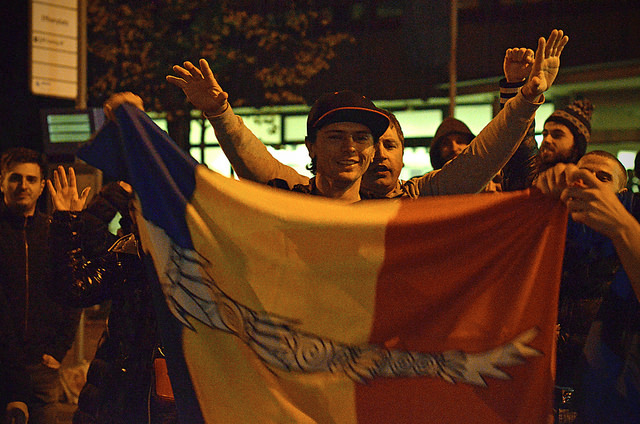 People trying to cast their votes for the Romanian presidential elections in the Consulate General of Romania, Munich, 02 Nov 2014.

I voted in the last presidential election just a few weeks ago. Yet still, when I gave my identity card to the embassy staff in Brussels I was somehow reminded of Romania’s communist legacy. “You are only half a Clujeanca, your birth place is actually Comanesti,” said the official. Indeed, I was born in the eastern part of Romania because my mother had been assigned a job there, as part of the Romanian Communist Party’s economic policies. Young professionals like her were uprooted upon finishing university, and spread around the country so that all regions would develop equally, no matter their local specificities.

On election day, I voted together with hundreds of other Romanians queuing for hours at polling stations across Europe. A historic 64% of Romania’s citizens cast their vote for the presidential elections in November 2014, leading to the victory of the liberal mayor of the Transylvanian town of Sibiu, Klaus Iohannis, over his socialist opponent, a strong nationalist.

The commencement of Iohannis’ mandate as president of Romania marks a quarter of a century since the fall of communism.

The commencement of Iohannis’ mandate as president of Romania marks a quarter of a century since the fall of communism. For some, however, the transition from communism is still ongoing.

The communist regime in Romania used Soviet-style nationalisation and collectivisation to turn an agrarian society into an industrial one. The communist dictator, Nicolae Ceausescu, starved the Romanian population for the sake of grandiose development projects. Under a paranoid and ignorant Ceausescu, Romanians were kept isolated from the Western world under his iron grip. The country’s secret police, “Securitatea”, became famous during the final years of communism for its savagely brutal ways to keep citizens frightened, deceived and terrorised.

Romania’s revolution in 1989 ended with the brutal execution of Nicolae Ceausescu and his wife, Elena, by a firing squad on Christmas Day. The transition that followed was largely led by former communists until 1996. Today, after seven years of EU membership and despite rapid economic growth since 2000, Romania is still one of the Union’s poorest countries. While some have managed to take a piece of the pie in the 1990s through a privatisation process highjacked by a handful of officials and state institutions, most Romanians found themselves lost in the transition. Corruption reached a shocking level in December 2013, when the Chamber of Deputies attempted to ammend the Criminal Code to apply immunity to all elected and appointed officials, a move declared unconstitutional by the Constitutional Court.

What is least known is that corruption and a lack of prosperity are just two of the legacies of the communist regime. There are many more: Securitatea managed to penetrate so deeply into people’s minds, that not only Romanians in their forties and above were turned into docile, fearful citizens, but also their children. A public opinion poll conducted in 2012, by IPSOS Public Affairs, shows that as many as 53% of Romanians still yearn for communist times. The elderly in Romania miss the stability brought by communism, either because they have forgotten its horrors or because, being part of the communist machinery, never suffered them.

Many of the Romanian expats I have met struck me as being rather uninterested in having social ties with their compatriots, although some Romanian emigrants are rediscovering, and live by, social ideals such as benevolence, honesty and fairness. A general lack of empathy is arguably the lasting effect of the Securitate mindset, which prevents social cohesion from taking hold again.

Communism is present in our identity both on paper and in day-to-day life, but few of us know what really happened in 1989.

Communism is present in our identity both on paper and in day-to-day life, but few of us know what really happened in 1989. Another poll conducted by INSCOP last year revealed that 80% of Romanians do not know whether the events in December 1989 were the result of a revolt against the oppressive communist regime, a coup d’etat staged to oust Ceausescu, or the result of Western maneuvers aimed at ending communism in Eastern Europe. I am part of the generation which started and completed its studies in the years that followed the revolution but was never taught in school a detailed history of Romania after the 1950s.

There are some encouraging facts when it comes to recovering social trust, however. According to the World Bank, an estimated 2.7 million Romanians living abroad sent home close to $4 billion in 2010, making Romania the largest recipient of remittances in the EU. Romanian migrants keep close ties with their homeland and although the money they send home is not used to start up new businesses and boost economic growth, it does bring prosperity to the households of their dear ones.

Twenty-five years after the fall of communism my generation, and those who follow, have the liberty to freely interpret their personal identity, to exercise critical thinking, and to mobilise towards common social goals. On that election day I felt that I truly shared something special with the other Romanians standing in the queues: the thrilling enthusiasm of deciding our country’s future through a vote that really matters, and the conviction that Romania’s social capital has been revived.