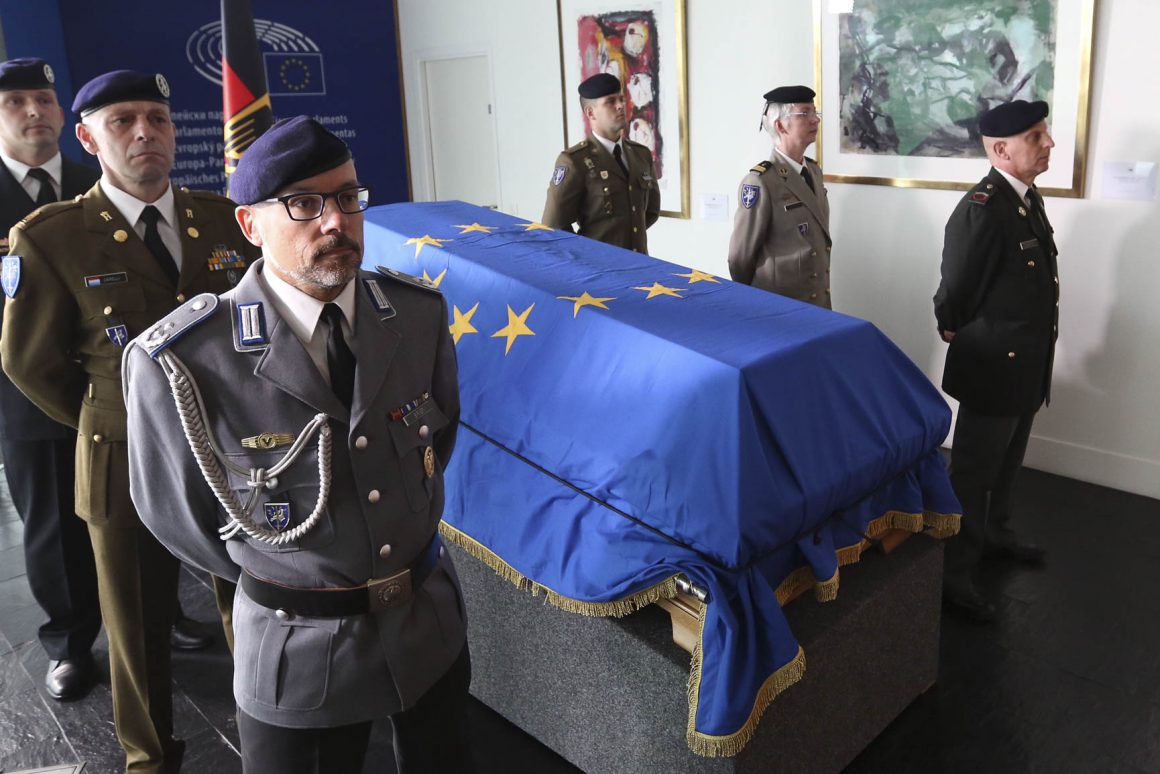 Helmut Kohl’s funeral showed just how far Europe has come since the division and war of the 20th century. His vision of a peaceful, united Europe and a shared identity is gradually becoming a reality.

The EU’s first official state funeral in honour of Helmut Kohl may just be the beginning of a new era of common European public events. Even national news outlets acknowledged the prestigious event with slightly more attention than usual. Though it was still far from the ceremonial pomp and live coverage you would see around the British royal family’s affairs.

What made this ceremony special was not only the attendance of MEPs and European leaders, but also the presence of leaders from the Middle East, Russia and the United States, who came to pay their respects to Kohl and the era of peace ushered in by the European Union alike.

Thankfully it was Bill Clinton, not Donald Trump, who was invited from the United States. And what a difference it made to hear a real American politician speak his mind. Chancellor Merkel and President Macron were smiling and nodding along, as he spoke.

Clinton himself may have somewhat intentionally alluded to the current situation in the US, when he said: “Look how different things are now. You may think, all of us who grow grey look tottering in the face of current realities, but there are no permanent victories, or defeats in politics. What matters most is what drives us.”

He gave a heart-warming speech full of anecdotes and personal memories. But his central message was for current leaders to have the courage to strive for the future and the long-term, not for short-term gains. “Because all of us sooner or later will be in a coffin like that and the only gift we can leave behind is a better future for our children and the freedom to make their own choices, including their own mistakes.”

Clinton pleaded for Helmut Kohl’s vision of “a world in which no one dominates. A world in which cooperation is better than conflict. In which diverse groups make better decisions than individual dictators. In which young people can be free to say that in our time we were wrong, at least, what we did, was not enough.”

Emmanuel Macron, the youngest speaker – and indeed statesman – in attendance, spoke for the next generation that already views Kohl’s life and work as part of the European history and legacy. According to Macron, news coverage doesn’t do the EU justice, and not just because it regularly highlights the bloc’s failures over its many daily achievements. The EU is seen as a lifeless technocratic construction, because the news, as well as many politicians omit the most essential component of the EU: friendship.

“We need to think about the life and destiny of Europe and this is the work of several generations. This is the sum of the work of people who have had the courage to do things that are greater than themselves. They have overcome hatred; they have overcome fear. Show me a house that feels like home if there is no one living in it.”

More specifically, his speech also touched upon the Franco-German relationship that has made the European project possible.

“You need ideals, imbued with friendship and the fullness of a life to give vitality to our project and make it endure. And that is where Angela Merkel and I, I hope, come in. I hope we can restore that sense, that fullness. History will judge us one day, it will judge us too and it will judge harshly whenever we slipped into the wish for short-term gain or national selfishness just because it was the convenient thing to do at the time.”

Other leaders, like Russian Prime Minister Dmitry Medvedev reminded us of the tensions we faced after World War II and during the Cold War and gave thanks to Helmut Kohl for extending the hand of friendship to both the West and the East, and to the European Union for playing a central role in overcoming our animosities.

“He dreamed not only of a united Germany, but also a united Europe of which Russia was an integral part. It was a dream of a common home, without barbed-wire, without fear, without animosity, hostility that divided the whole continent. A dream of peace and prosperity for everybody.”

The President of the European Commission, Jean-Claude Juncker spoke not as president, but as Kohl’s close personal friend: “Yes, he was a German patriot and a European patriot. Because he didn’t see any contradiction in that which is German and that which needs to be European. For Helmut Kohl German and European unity went hand in hand.”

With self-identification as European on the rise among the continent’s young citizens, it may very well just be a matter of time before Helmut Kohl’s vision becomes a widely accepted reality.