By  Alexis Boutefeu-Moraitis and Jack Copley

Misery is palpable in Athens: the increase in ‘closed’ signs outside small shops, the long queues at soup kitchens and the growing numbers of homeless and drug addicts in the streets. Currently, there is no visible change on the ground. However, optimism has replaced hopelessness in everyday discussions. In the context of brutal austerity, the victory of Syriza in January’s electoral battle came as a slap in the face to European elites. Syriza’s governing plan has four main aims: the immediate alleviation of the humanitarian crisis, the restoration of people’s incomes to stimulate the economy, a pro-employment policy of reinstating workers’ rights and a push to make government more transparent. This inspiring development needs to be accompanied by a level-headed analysis that goes beyond the rejectionism of the communists (KKE) and the propaganda of the right. Here are some observations to that end.

1) Syriza brought politics back into the discussion.

January’s elections not only saw the historic victory of a leftist party, but also a popular condemnation of the main political parties. The dismantling of the traditional post-dictatorship political landscape represents the peoples’ declaration of the value of human needs over debt repayment; the importance of sovereignty over the dictates of the IMF and EU. Since 2010, the ‘socialist’ PASOK party of Papandreou, the technocratic government of Papadimos and the ‘national salvation’ government of Samaras have enforced austerity in the name of national interest and Greece’s unquestioning obligation towards its creditors. This intellectual terrorism – the ‘No Alternative’ dogma – has been completely rejected. Syriza’s victory announced the re-politicisation of economic policy, as they have rescued the human element of the crisis from the technocrats’ dry rhetoric.

2) Working people, not Syriza, are the agents of change.

Amidst the eagerness of the global left to celebrate Syriza’s triumph, it should not be forgotten that electoral victory is not an end in itself. Rather, it summarises the wider popular opposition to austerity that manifested itself in the 2010 strikes, the 2011 Indignant Citizens movement, the 2012 272-day strike by Halyvourgia Steel workers, etc.. Syriza is not a benevolent political force external to society, here to save the Greek people: January’s results are a consequence of class struggles. It is therefore important to remember that the new-found power of Greek workers doesn’t reside in the subjective will of leftist politicians to negotiate/clash with the EU, but in the continuation of such struggles on the ground. 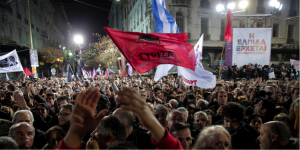 3) The crisis was shaped by the Eurozone, but disaster would have struck regardless.

The Euro brought European countries into close mutual cooperation and competition. Peripheral European economies, with lagging productivity due to their incomplete industrialisation, couldn’t compete with Germany’s high-performing manufacturing sector and harsh suppression of its own workers’ wages. This boosted German exports, pushed countries like Greece into big trade deficits, and prevented them from developing a competitive productive base. Consequently, Greece maintained domestic consumption of imports by borrowing at low interest rates (thanks to the Euro) – households and government became increasingly indebted. Nevertheless, even without the common currency, Greece would still have faced competition from large, austere economies and would likely still have taken advantage of cheap credit when the real economy under-performed. The Euro is the reason why the Greek disaster has taken the form of a national debt crisis, rather than a currency crisis. But, as a glance around the world shows, crisis was coming – Eurozone or not.

Syriza’s immediate aim is to meet the needs of Greek people. However, Syriza also claim that their ‘stimulus programme’ will reinvigorate the economy. There is no historical support for this belief. Following WWII and the Civil War, Greek restructuring destroyed working-class power. From 1960, Greece entered its ‘golden age’, with exports skyrocketing while workers’ incomes plummeted. The height of this boom coincided with a brutal dictatorship (1967-74) that further repressed labour. Greek materials were so cheap and labour so exploitable, that businesses could make huge profits – driving continued investment. When the dictatorship was overthrown, workers began winning wage and union rights victories, leading to the election of the socialist PASOK party in 1981. Yet, PASOK’s Keynesian reforms – large public expenditure and wealth redistribution – worsened the ongoing economic downturn. As the potential to make profits evaporated, economic growth shrank. By 1985, PASOK had abandoned their socialist goals and instituted austerity, paving the way for ‘growth’ from the mid-1990s to the Eurozone era.

5) People’s needs and the (capitalist) economy’s needs are not the same.

The success of a national capitalist economy depends on its ability to provide profitable investment opportunities within its territory. The conditions required for profitable investment are often totally at odds with people’s welfare: in Greece, the boom of the dictatorship and Samara’s 2014 proclamation of a return to growth both required the impoverishment of the working population. This is not to say that any socialist party like Syriza is doomed to fail. Rather it means that such a party will reach a point – sooner or later – in which they must renege on their commitments or push beyond capitalism’s thirst for profit. At that point, which PASOK faced in 1985, it is crucial to have a strong left tendency in the party, supported by a broad movement of working people committed to an economy that meets needs, not profits.

The coming months will be of historical importance, as the degree of success of Syriza’s programme will constitute a major reference point for the evolution of the left. Whether their programme will be able to provide relief for the working-class or join history’s dustbin of failed socialist experiments resides in the unfolding debt negotiations. However, the possibility of building a democratic economy depends on the emergence of a pan-European, non-sectarian movement that will defy Brussels’ technocrats.

Alexis Boutefeu-Moraitis is a first-year PhD student at the University of Warwick conducting research on the politics of deindustrialisation in France.

Jack Copley is a PhD researcher at the University of Warwick, working within the ESRC-funded ‘Rethinking the Market’ project.