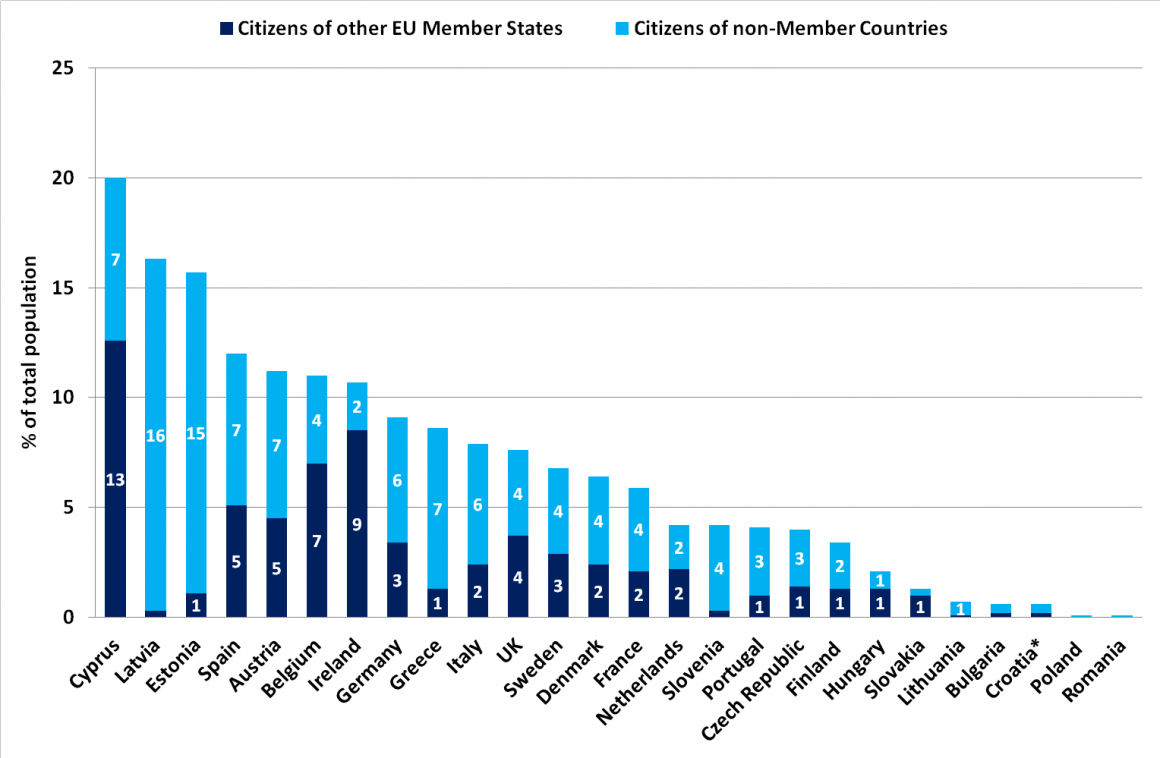 Europe is a continent of migrants. Millions of EU citizens move freely between member states every year, thus contributing to GDP growth. An additional 11% of the total EU population of 500 millions are immigrants coming from outside the EU.

Becoming an immigrant in Europe

Most of the foreign immigrants cross the borders into Europe as asylum seekers, fleeing their countries where they are threatened, persecuted and abused in the hope to obtain legal and physical protection. They risk their lives, and thousands die every year in the attempt. Those who do survive the journey into Europe have shivering stories to tell. Most endured abuse by human traffickers, theft, or even deprivation of food and water for days. They and their families have probably experienced conflict, and witnessed killings and destruction.

The majority of foreign immigrants entering the EU now are Syrians. Given the disintegration of their country in the past four years, it is understandable that hundreds are fleeing. Syrians filed close to 100,000 asylum applications in the past three years, according to Eurostat. Applications for asylum are usually rejected, and migrants are given a temporary residence permit until the situation in their country of origin allows them to go back. But the situation in their country of origin might not change anytime soon, and this leaves immigrants in a limbo with temporary permits, temporary jobs and temporary lives.

As asylum policies in member states are still not harmonised, immigrants are often subjected to political decisions. Such was the case of war-driven Libyans who reached the shores of Italy by boat in 2011 in bursts of happiness to be violently turned back to Libya as a consequence of an agreement between the acting president Berlusconi and Libya’s Gadhafi.

Asylum seekers are definitely in the minds of the tens of thousands of Germans chanting “We are the people” in sign of protest against opposing immigrants, who are accused of bringing their problems into Europe.

Italy, France, Germany, the United Kingdom and Spain, are the countries that receive most asylum seekers every year. Their cities are gentrified, with entire generations of migrants and Europeans leading separate lives in separate communities only a few kilometers away from each other. The economic crisis and the rise of European unemployment made immigrants the target of populist right-wing parties with xenophobic political programs. The recent killings of the cartoonists in Paris give rise to these parties’ popularity across Europe, and provide the perfect argument for populists to say that radical Islamism is happening in Europe because of immigration.

These parties want to put an end to the free movement of persons, thus undermining one of the very European values that guaranteed peace and economic growth since World War II. Le Pen’s National Front in France wants France to withdraw from the Schengen area altogether. More worrying is the support that these parties are gaining. The UK Independence Party (UKIP) and the National Front won in May’s European elections in Great Britain and France respectively, while populist parties in Italy, Germany and Slovenia, gained a significant number of votes.

No European is indifferent nowadays when it comes to immigration. What’s more, according to a 2014 survey conducted by Pew Research Center over half of Europeans interviewed in seven member states want less immigration. This is mainly because terrorist attacks such as the one on Charlie Hebdo are easily associated with the increasing influx of immigrants of Muslim religion into Europe. Assuming that all Muslim immigrants will take up arms sooner or later against Christian Europeans is at best racism. At worse, it is pure igno 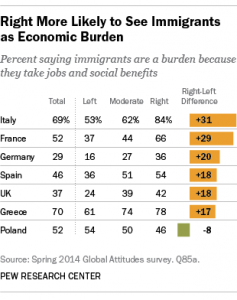 rance. The banning of the construction of minarets (the towers of mosques from which people are called to prayer) in Switzerland in 2009 is just one example.

Radical Islamists are targeting Europe (and anyone who is not the right kind of Muslim for that matter) on religious grounds. They believe that they have an obligation to wage war against infidels. Religious extremists, be they Muslims or Christians, are just another kind of extremists, and they will remain a constant threat. Mixing up immigration in Europe and extremism is emotionally easy, but logically flawed.

The myth of “stealing our jobs”

Refugees participating in the labor market often contribute to GDP growth of their host countries by putting to good use their skills. Repeated studies have shown that the effect of immigration on European employment and wages is positive. One such study published last year by the Journal of European Labor Studies shows that Europeans in areas with immigrants are more likely to upgrade to a better-paid position or start a self-employment activity.

Another study published by the Migration Policy Group in 2012 finds that second and third generation immigrants see job security as their main concern, are interested in voting and participating in political life, and want to become European citizens. According to the findings of the study, satisfying these needs would make immigrants feel more settled, get better jobs, and become more educated and involved in their host countries. Discrimination only makes things worse. The spill-over effect of the European’s despise for first-, second- and third-generation foreign immigrants is making immigrants feel less at home, and encourages them to integrate in the host country’s adversarial culture.

In 2012, the European Union was granted a Nobel Prize for human rights and world organising. The Prize read “for over six decades [of having] contributed to the advancement of peace and reconciliation, democracy and human rights in Europe”. Forgetting about tolerance and understanding between cultures, and failing to fully understand the impact of immigrants in the European Union, goes against this advancement and makes Europeans fall pray to unfounded populism that gives fuel to the hate speech of radicals.