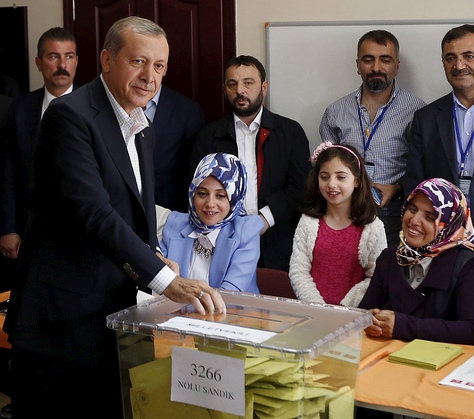 In an unexpected turn of events, the Turkish general elections on 7 June did not end well for the conservative Islamists who have governed the country for the past thirteen years. The Justice and Development Party (AKP), which obtained 41% of the vote, has effectively—and unexpectedly—lost its majority in the Parliament and will now be forced to share power through a political coalition with other parties if it holds onto hope of governing the country.

Indeed, AKP and their leader, President Recep Tayyip Erdogan, have virtually dominated Turkish politics for the past thirteen years. At the beginning, Erdogan embodied the hopes of the reformist camp. He managed to rein in the secular military establishment, foster economic growth and increase negotiations with the EU. Even political representation of the Kurdish community, as well as the right to speak their own language, were partially recognized. A couple of years ago, however, his policies started taking an authoritarian turn. Repression was coupled with successive reforms to increase the government’s grip over society and undermine independent institutions. As president, Mr. Erdogan openly backed his own AKP during the last electoral campaign, thus flouting constitutional provisions aimed at ensuring that the head of state remain above the political fray. When the media cried foul, journalists were arrested and imprisoned. In fact, Turkey ranks now 149 out of 180 countries in the “Reporters without Borders” index, prompting some to compare Erdogan’s power hungry ambitions to Russia’s President Vladimir Putin.

Mr. Erdogan openly backed his own AKP during the last campaign, thus flouting constitutional provisions. When the media cried foul, journalists were arrested and imprisoned.

The results of the election carry implications on several major fronts. First, the President will have to compromise on a coveted constitutional reform that would have arguably pushed Turkey further from democracy. Indeed, Erdogan had envisaged to change the parliamentary system into a presidential one that would have widened his powers. However, his party fell short (258 seats) of the needed three-fifths majority in Parliament (330 seats) and will be forced to form a coalition. AKP might have to shake hands with the new kid on the block, the People’s Democratic Party (HDP)—which started out as a Kurdish outfit but  later became much more inclusive—for any real possibility to pass its reforms. However, this remains unlikely given the nature of the HDP’s campaign and its appeal to voters as a bulwark against creeping authoritarianism. The party’s leader, Selahattin Demirtaş, has publicly remarked that he “would not let Erdogan become a Putin-like president.” A second, and perhaps more likely, option is a coaltion with the conservative Nationalist Movement Party (MHP).

Brussels diplomats believe that the formation of a new coalition government intent on steering the country west instead of east will breathe new life into Turkey’s negotiations with the EU.

Second, Turkey’s bid to join the EU might be reinvigorated. EU statements after the elections were encouraging and some Brussels diplomats believe that the formation of a new coalition government intent on steering the country west instead of east will breathe new life into the negotiations. More broadly, Erdogan’s foreign policy might have to be recalibrated. Once seen as a model, Turkey’s assertiveness has become an irritant as relations with Israel have grown increasingly tense and bids to support Islamists in the region, ranging from former Egyptian President Mohamed Morsi to Libyan militias, have gone terribly wrong. And despite the country’s generosity towards hundreds of thousands of Syrian refugees, some see a collusion of interests with ISIS over the Kurdish question.

But it would seem that the biggest loser of these elections is not the AKP but Erdogan himself. He framed the election as a referendum on his persona and was seemingly confident that he would consolidate his authority through the ballot box. As one EU diplomat put it, these elections have been “like a breath of fresh air for Turkey,” but also for Europe as a whole.