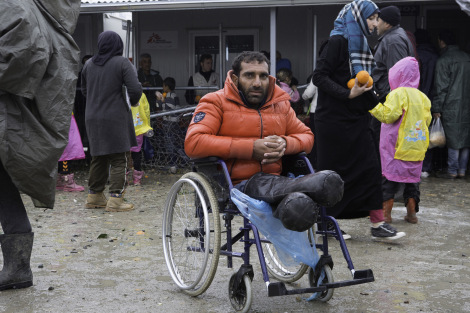 Together with the photographer Eleni Papadopoulou, we spent six days following refugees from Turkey to Idomeni, northern Greece, through Lesvos, Piraeus and Athens for the cypriot daily POLITIS. (All photos are courtesy of Eleni Papadopoulou)

What we lived and what we saw was a great lesson of humanity and strength but also a painful experience of suffering. The texts and the photos are just one small part of what is really happening…

The fate of thousands of refugees trapped in Greece and not only in Greece, but also the political and moral heritage of the EU will be decided by the Summit starting tomorrow in Brussels.

What we witness is a “great bazaar” where the politicians of the EU member States try to defend their national positions, to ensure the interests of their countries and to ensure their political survival as the refugee crisis is now an atomic time bomb ticking in the foundations of the systemic parties and politicians across the Old Continent.

A key issue for almost all member States, is to keep the refugees away from Europe and to ensure that those who eventually will come to the Old Continent will be the ones chosen by the Sates with their own criteria, ie the most educated, the youngest, the most healthy, the most “integrational”.

Few of those who take part in this “big bazaar” and who are shaping developments in Brussels are fully aware of the horrific conditions under which refugees live nor of the reasons why they have taken the road of the great escape.

Some politicians and high European officials went yesterday only for the first time in Idomeni.

European politicians and officials have simply “forgotten” that refugees are people, that behind this “refugees” are human lives, human suffering, human hopes. That the EU has “forgotten” that behind the “refugees” there are people is indicative of the dramatic moral decline to which the European project has come. The refugee crisis may actually turn to be the death certificate of the European Union a system of human values and principles.

At the same time, the fact that the EU considers that an agreement with a third country, which now happens to be the Tayyip Erdogan’s Turkey, will be able to hold the largest number of refugees outside European territory or ultimately that the sealing of the borders of the Balkan countries will keep refugees in Greece shows how far from reality are the European bureaucracies.

Most refugees fleeing their countries because if they stay there not only they face certain death, but many of them face a horrible death. Because in many cases how one dies makes a great difference.

All our fellow human beings, those who happened to be born in Syria of the Assads or Saddam’s Iraq or Taliban’s Afghanistan and not only these places, have no hope today than to get into Europe.

What the European diplomatic and political bureaucracies fail to see (or just refuse to see) is that for the refugees, the borders between Greece and Skopje or the rest of the borders towards central and western Europe, are obstacles that can be circumvented just as all the other obstacles-borders up to Greece. The power of these people is inexhaustible and their will is of steel.

And unfortunately, together with the strength and the will, there are networks of smugglers who don’t lose the opportunity to take advantage of new situations, new routes.

As Amnesty International warned, the agreement that the European Union wants to strike with Turkey is inhumane. Among other things, any border closure will provide new opportunities for smugglers, notes Amnesty International and stresses that the new routes that smugglers will propose to refugees will be even more dangerous and much more expensive.

Among the dozens of refugees that we met during our journey from Turkey to Idomeni, through Lesvos, Piraeus and Athens, people with chronic health problems and disabilities are among the most representative examples of this will of steel. Those people who have left their countries and were of limited mobility or who should have access to treatment almost every day will not stop in Idomeni. They will not stop anywhere.

In the mud of Idomeni we saw many wheelchairs outside tents. And the last day before we left, we met “Bashir”. A Kurd from Hasakah in northern Syria where particularly harsh battles are still ongoing between Kurds and the jihadists of the “Islamic State,” “Bashir” was born without legs.

He left, together with two parents and siblings and their family from Hasakah a month ago. In the hazardous Turkish-Syrian border, “Bashir” was carried on the shoulders by the other family men. They fell, picked him up, dragged themselves on earth and stones, “Bashir’s” hands had become a large wound.

Then by bus from the border to Izmir. And there, “Bashir” boarded with the help of family men in one of the rubber dinghies that smugglers are pushing into the dark and dangerous waters of the Aegean sea, towards Lesvos.

“I was a little bit scared in this boat but I had a life jacket and I was with my family, ‘he says with his broken Turkish. When borders in Idomeni closed for good, “Bashir” was blocked on the Greek side with his oldest sister and her family, the other family members and their parents manage to cross to Macedonia and from there to Germany.

“I stay here, perhaps the border will open even for a moment and I can cross it. Maybe there’s another way”, he said and he went to his tent, spinning the wheels of his wheelchair.

“Bashir” was among the refugees tried to cross the Axios river to FYROM, two days ago.

Dalal is talking without much comfort in English but we talk without problem. We are in the kidney dialyses unit in the state hospital of Kilkis, about half an hour by car from Idomeni.

“I need to make three dialyses per week, I do dialysis for the past four years.” 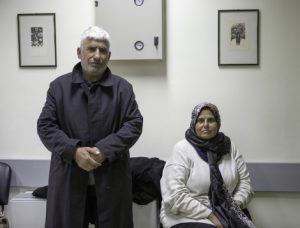 Dalal is from Latakia, she was a nurse there. She left with her husband and their children and grandchildren before nearly a month. From Latakia to Izmir, passing the dangerous Turkish-Syrian border, she stayed five days without dialysis.

“When I arrived in Izmir my body was very weak, I wanted to vomit and I could not stand on my feet.” She had made a dialysis in Izmir, entered a rubber dinghies of the smugglers, “fortunately we made it with the first attempt”, she had two dialyses in Lesvos, one in Athens and she came to Idomeni.

“I will wait here. Something might come up and we might somehow cross the borders to Europe and we ‘ll move on. ”
Next to Dalal, Hassan, a pharmacist from Damascus. He began to do dialysis two months ago in Syria. Yet he too followed with his family the road of the great escape.

And he does the roundtrip with the van of the Doctors without Borders from the mud of Idomeni to the hospital of Kilkis to do the dialysis.

Waiting for the decisions of the Union’s leaders …

This article by Evangelos Areteos was originally published, along with the photos by Eleni Papadopoulou, on the Roving Correspondents blog on 16 March 2016. It is reproduced here with the author’s permission. Other parts have been subsequently published (click on the links): Part 2, Part 3, Part 4, Part 5.