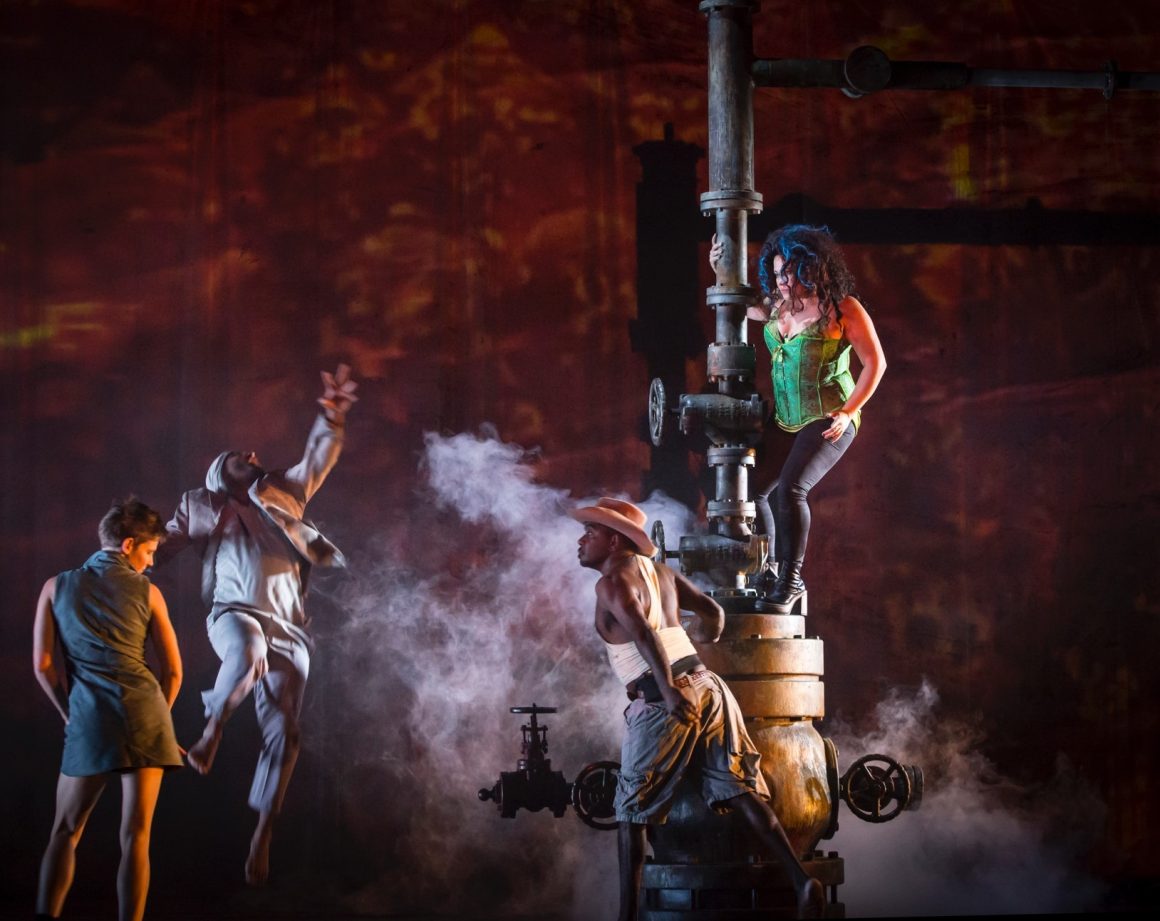 Helen Gilbert is a leading scholar of postcolonial and indigenous theatre, with a particular interest in arts-based activism on environmental issues. She has taught at universities in Australia, Britain, Japan and Germany and worked with Indigenous performance-makers from various parts of the world to bring their work to festivals and exhibitions in Europe. Her current research, based at Royal Holloway University (London) focuses on water-related eco-activism in embodied arts and protests.

Marrugeku is an Australian intercultural dance-theatre company dedicated to the growth and preservation of Indigenous stories, languages and cultures through the embodied arts of performance-making. Jointly led by Rachael Swain and Dalisa Pigram in a unique creative partnership that has now endured for more than 25 years, the company builds bridges and breaks down walls between urban and remote dance communities, between Indigenous and non-Indigenous artists and between local and global situations. Dalisa a dancer, choreographer and proud member of the Yawuru and Bardi peoples, is based in the small town of Broome in her ancestral homelands on Australia’s north west coast. Rachael is a director and dramaturg of settler descent, originally from Aotearoa New Zealand and now based in Sydney. Together and with a range of other collaborators, they work across cultural, geographical and artistic borders to produce ground-breaking shows lauded not only for their aesthetic appeal but also for their political vision.

Marrugeku’s first productions, Mimi (1996) and Crying Baby (2001), emerged from long collaborations with musicians, dancers and storymen in the tiny settlement of Kunbarlanja in Arnhem Land. These large-scale outdoor performances gave dramatic form to the spirit worlds and Djang (or Dreaming) stories of the Kunwinjku people through a stunning fusion of contemporary and traditional styles. As well as introducing distinct Indigenous worlds to audiences across Australia and abroad, the shows acted as training grounds for emerging artists and helped to inspire pride in their communities. 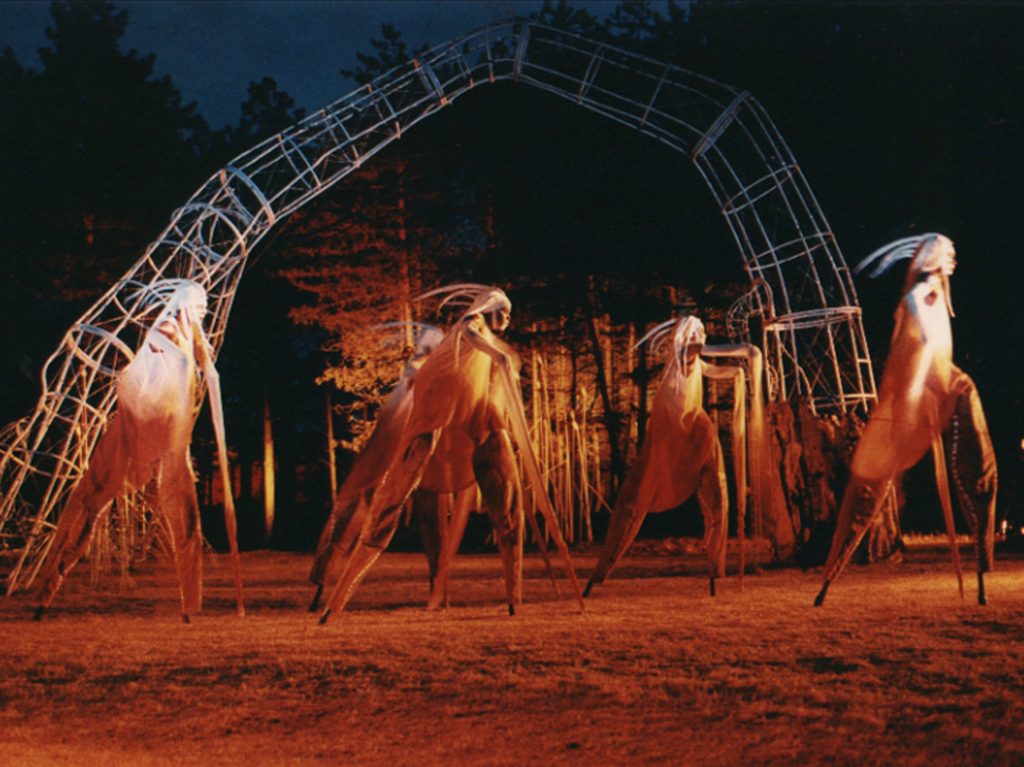 ‘Telling that story, that’s a good way to teach – that’s my way to teach so those Balanda (Whitefellas) can learn too.’ – Thompson Yulidjirri

Much of Marrugeku’s work conveys the complex social reality of Indigenous societies as they grapple with the legacies of colonialism. Stories of land theft, discrimination, forced assimilation and structural racism drive the performances, but they also pulse with defiant and hopeful energy. This vitality runs through the rap rhythms of Burning Daylight (2006) as the disaffected youth at the heart of the show glimpse a sense of possibility for the future. It also runs through the fluid blend of Indigenous, Asian and Western dance in Gudirr Gudirr (2013), Dalisa’s award-winning solo on the themes of mixed-race identity, youth suicide, and decolonisation. Both shows were inspired by the unique social dynamics of Broome, one of Australia’s earliest gateways for Asian immigration. Although these dramas expose brutal histories of racial oppression, they also celebrate the richness of the town’s heritage and its multicultural ambience. ‘We feel the urgency to keep language and culture alive’, Dalisa says. ‘As an indigenous woman with multiple cultural backgrounds, I carry my family and people’s histories in my body – also the current issues that weigh down our hearts or lift them up. All that goes into my dance’.

Rachael and Dalisa’s commitment to social justice is matched by a passionate concern with environmental issues, which they typically explore under the guidance of local Elders and land custodians in the places where Marrugeku makes its performances. By showing how Indigenous communities care for Country, the company tackles the burning question of how to better understand and avoid ecological crisis. In Indigenous terms, Country encompasses not just the landscape but also the intricate web of relationships between human and non-human beings in a particular place. ‘Indigenous people are experienced in reading the landscape, the reactions of the species living there, the seasons and the changes in weather patterns’, Rachael explains. ‘If we learn how to listen, the land can speak to us and tell us a way to approach the future’. That listening process is woven into the fabric of works like Cut the Sky (2015), Marrugeku’s urgent call to action on climate catastrophe. Here, poetic monologues by Walmajarri/Nyikina artist Edwin Lee Mulligan serve to frame and shape an exposé of the devastation wrought on Indigenous lands by the fossil fuel industry. The creative team also included collaborators from Belgium, Burkina Faso and India. This mix of talents has produced a multi-media tour de force grounded in Indigenous world views but insistently global in vision.

A simple but profound question underpins Marrugeku’s cosmopolitan ethos: ‘How can we work together across cultural differences to stage stories that speak to the global challenges of the new millennium?’ As well as creating shows that reach from Indigenous communities to audiences around the world, the company fosters intercultural exchange as a potentially powerful way to decolonise mainstream modern dance. For Rachael and Dalisa, that means bringing the experiences, movement styles and cultural knowledges of different artists into a conversation, rather than pursuing any particular kind of physical training. This approach is vital to the company’s ongoing series of choreographic laboratories fostering trans-Indigenous exchange in the Asia-Pacific region. Le Dernier Appel/The Last Cry (2018) grew from one of these labs as a visceral expression of shared frustration at the slow pace of decolonisation. The show responds specifically to New Caledonia’s second referendum on independence from France and Australia’s refusal to embrace a treaty with its Indigenous peoples. 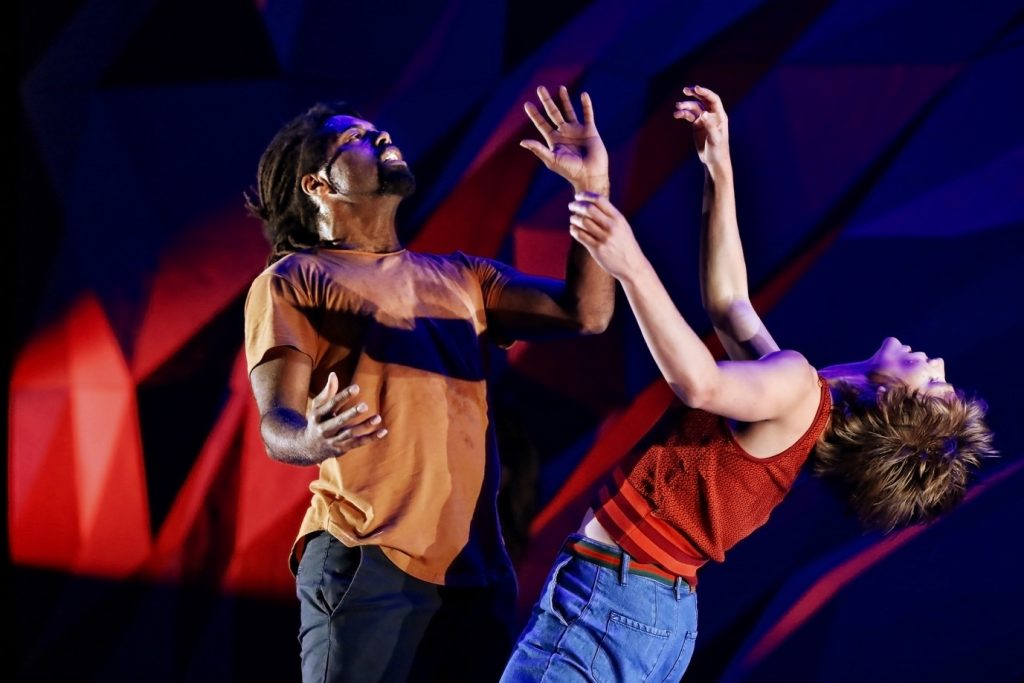 ‘While governments debate, peoples born of invasion, migration and displacement, wait for the new day. From divergent histories we meet in states of instability, frustration and radical reinvention.’ – Marrugeku

Marrugeku is currently in the final stages of developing Jurrungu Ngan-ga (Straight Talk), which addresses the racism, fear, and prejudice behind our persecution of those who are culturally different. The production is named after a Yawuru kinship concept that enables direct communication between certain relatives. It has inspired a diverse and multi-talented cast to explore links between Australia’s disproportionate incarceration of Indigenous youth and its locking up of asylum seekers in offshore and onshore detention centres. The story strands converge in a compelling climax: ‘One by one, the performers of Jurrungu Ngan-ga begin calling out the names of Indigenous people and refugees who have died in custody on Australia’s watch and the circumstances in which they died. Real lives, real deaths. Real government responsibility. This is the “straight talk” at the heart of the work’. (Marrugeku 2021).

Looking to the future, Rachael and Dalisa have plans, among other things, for a triple bill of solos exploring what Indigeneity means within Asian cultures. Asked to comment on the secrets of their success, Rachael explains: ‘Dalisa and I bring very different things to make a work: she brings the fine detail, the nuance, and great care and attention to community, and I bring the overarching strategy and conceptual direction, the big picture. So, we need each other in a way, and we really work well together’. ‘We are often dreaming up things to benefit others, but also for our own growth and insights’, Dalisa adds. ‘If we’re not challenged, I think both of us would hang up our boots pretty quickly’. 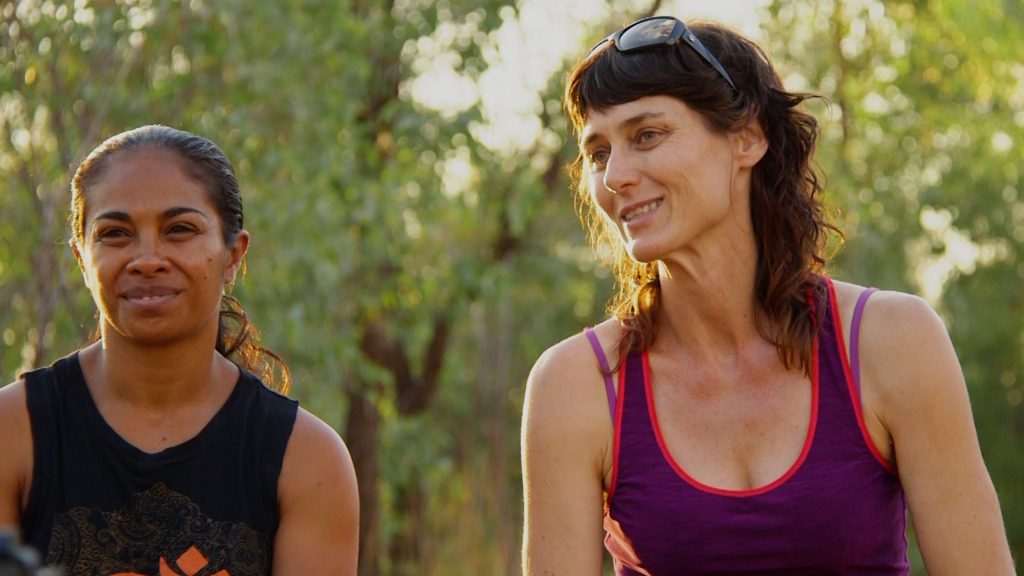 Find out more about Marrugeku at www.marrugeku.com.au or listen to musical highlights of the company’s performances at https://bit.ly/MarrugekuMusic25. 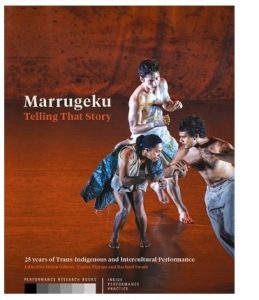 Marrugeku’s work is documented and analysed in depth in  Marrugeku: Telling That Story—25 years of Trans-Indigenous and Intercultural Performance, a richly illustrated volume of script excerpts, essays, interviews and artist reflections, edited by Dalisa and Rachael in collaboration with Helen Gilbert for Performance Research Books (2021).

You can watch the captivating online book launch event here.

You can purchase the book here (UK) and here (Australia)

Author’s bio: Helen Gilbert is a leading scholar of postcolonial and indigenous theatre, with a particular interest in arts-based activism on environmental issues. She has taught at universities in Australia, Britain, Japan and Germany and worked with Indigenous performance-makers from various parts of the world to bring their work to festivals and exhibitions in Europe. Her current research, based at Royal Holloway University (London) focuses on water-related eco-activism in embodied arts and protests.

Helen Gilbert is a leading scholar of postcolonial and indigenous theatre, with a particular interest in arts-based activism on environmental issues. She has taught at universities in Australia, Britain, Japan and Germany and worked with Indigenous performance-makers from various parts of the world to bring their work to festivals and exhibitions in Europe. Her current research, based at Royal Holloway University (London) focuses on water-related eco-activism in embodied arts and protests.