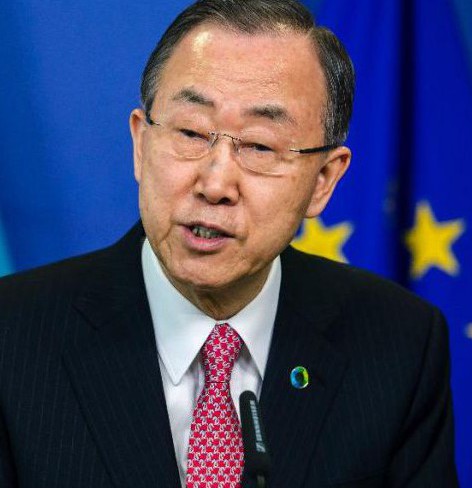 Secretary-General of the United Nations Ban Ki-moon delivered a formal address to the European Parliament on Wednesday, 27 May, as part of his goodwill tour marking the 70th anniversary of the United Nations. In his speech,he welcomed the Commission’s proposals as outlined in the Agenda on Migration, mentioning that the move to relocate 40,000 asylum seekers is a step in the right direction: “I encourage EU member states to show compassion as they consider this important proposal to share their resettlement responsibilities.”

Before arriving to Brussels, the Secretary-General made a stop in Dublin where he stressed the need for renewed efforts in dealing with the migrant crisis. He made it clear that the priority should be saving lives, not sinking boats, hinting at the EU plan of attacking smugglers’ vessels. Once in Brussels, Ban Ki-moon reiterated his underlying belief that any military option would have little effectiveness. He went on to say that “destroying these boats may end up eventually depriving the very limited means of these people, even if those boats are sometimes used to smuggle people in criminal acts.” Additionally, the use of force could significantly damage the EU’s reputation as more and more international NGOs and migration experts warn about the possibilities of profound collateral damage created by such an endeavour.

In his speech, he urged EU leaders to provide a comprehensive and prudent plan to deal with the current humanitarian nightmares. By invoking the demographic and economic rationales in making the case for the embattled migrants, the Secretary-General appealed to Europeans’ pocketbooks, reminding his audience that aging populations “need migrants to maintain economic dynamism.” Furthermore, he encouraged rescue missions in the Mediterranean, the Andaman Sea and Syria as opposed to the proposed seek-and-destroy military operations. The military option is a very contentious issue, not only for the United Nations but within the European Union itself. And it is no secret that many powerful EU leaders are roaming Brussels’ corridors prefering this option to any other.

The UN head discouraged the EUNAVFOR Med mission’s goal of disrupting and breaking the business model of people smugglers through the use of military might. “Saving lives should be the top priority”, he said. “And while we need to see more effective law enforcement actions against traffickers and smugglers, we also need safer alternatives to dangerous voyages, as well as legal channels such as resettlement, family reunification and work and study visas.”

The EU needs all the support it can get in order to launch EUNAVFOR Med by July. But more importantly, it requires UN Security Council approval to send troops close to the Libyan shore or within Libya’s territorial waters. Whether the EU will have the go-ahead rests solely with the veto-yielding countries in the Security Council. Yet, what Ban Ki-moon’s speech achieved was exposing the gaping rift that exists between the international community and the EU on the decision to use military force.

Among a set of proposals that Katoikos’ parent institution, the Foundation for Global Governance and Sustainability (FOGGS) has put forward for a “modern, effective, ethical and people-centred United Nations”, is the introduction of a global holiday. Over the past several decades, 21 September has been celebrated by the United Nations as International Day of Peace….