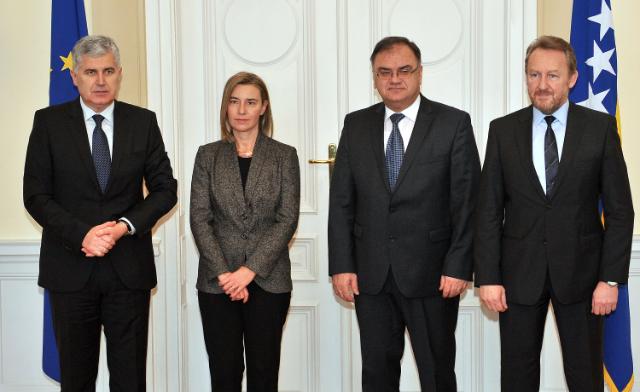 The EU has decided to implement the Stabilization and Association Agreement (SAA) negotiated in 2005 and signed in 2009 with Bosnia and Herzegovina (BiH). The decision was taken at the meeting of the EU foreign ministers on 16 March.

BiH was recently the subject of an initiative jointly launched by the foreign ministers of Germany and the UK, who called in a public letter on BiH´s leaders to give a “written commitment” to socio-economic reforms as a pre-condition for the entry into force of the SAA. Crucially, the initiative sidelined a major obstacle in EU-BiH relations so far. It explicitly postponed sine die the application of the “Sejdic-Finci ruling” of the European Court of Human Rights from 2009, according to which BiH was supposed to reform its constitution and thus allow minorities (such as Jews and Roma) to run for government posts, currently reserved for Bosniacs, Bosnian Serbs and Bosnian Croats, as the “three constituent peoples”.

The country has been in a political deadlock for years with major unemployment and corruption taking the toll on Bosnian citizens, who elect their politicians based on proportional representation in each ethnic group, as stated in the Dayton Peace Accords of 1995. There have been previous efforts to kick-start long stalled reforms in view of an EU membership application, such as the Partnership Document of 2008. This time, however, the German-British initiative seems to have had a stronger effect. The BiH Presidency and political parties quickly signed on to it in January 2015. The EU diplomacy head, Federica Mogherini, visited Sarajevo in February to witness the formal adoption by the country’s Parliament.

The decision to speed up the entry into force of the SAA is intended to unblock BiH’s path towards EU membership. The SAA’s main goals are inter alia developing the free movement of goods and a market economy, reducing corruption and crime, and promoting human rights and democracy in order to comply with the Copenhagen criteria of entry into the EU. The move, however, has been criticized in some quarters as being inconsistent with previous EU policy.

Indeed, the Union had earlier conditioned the SAA’s effective application on the implementation of the “Sejdic-Finci” ruling, as stated in the Council Conclusions adopted in 2011. Dropping this requirement, the argument goes, would mean lowering the bar and would thus undermine the EU’s credibility in negotiations for the accession of the Western Balkan country.

Everyone knew this year´s 20th anniversary of the first genocide committed on European soil since World War II was going to be special. There was of course the symbolic twenty-year mark, which prompted a flurry of articles from left and right on everything from the infamous UN Dutch peacekeepers who stood aside while the Bosnian Serbs separated women from men to the labours of International Criminal Court for the Former Yugoslavia

Taking time out of the Greek crisis, Chancellor Merkel set off on a tour of the Western Balkans (8-9 July), reassuring the nations of Albania, Serbia and Bosnia-Herzegovina of her support for their eventual joining the European Union. The three Balkan countries have long been campaigning to be part of the 28-nation bloc and see their candidature jeopardized by the EU’s preoccupation with what is happening with Greece.