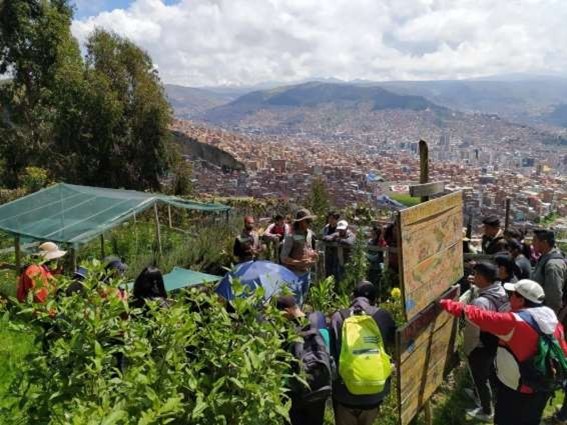 A panoramic view of the Lak’a Uta organic garden during a guided tour. La Paz city is in the background (Fundación Alternativas, March 2020)

Juan Torregrosa Rodríguez is a Spanish journalist specialised in Mediterranean affairs and migrations. He was engaged in a food security project in the Bolivian Andes with the Chilean NGO América Solidaria. Currently, he is part of the Spanish think tan La Puerta de África that aims to change the external vision of the African continent. He is part of a social transformation communication project in the southern Spanish city of Seville through a radio podcast channel.

Officially recognised as one of the New 7 Wonder Cities of the World in 2015, La Paz, the administrative capital of Bolivia, is globally known for its unstable weather conditions. Located at 3,600 metres above sea level, its particular orography has historically pushed the local populations to face the challenge of achieving real food sovereignty in one of the world’s most hostile regions for practicing urban agriculture.

At the beginning of 2020, the World Food Programme (WFP) included Bolivia in a list of 15 country-hotspots with the highest risk of growing food insecurity in the world. Ana María Slahuana, the Bolivian WFP representative, argued that the Andean country comprises several regions with the highest danger of suffering climate change effects at a global level.

Since 1980, global warming has caused over 43% of the Bolivian glaciers to melt. Prominently found in the Altiplano region, the glaciers provide 15% of the safe water available in the region. Up to two million people depend on it, especially during the dry season, from May to October. This situation represents a short-term water resource issue that affects the local farming economy. Presently, 40% of the national population works in this sector, representing 15% of the Bolivian gross domestic product.

The rise of quinoa

Quinoa’s resistance and ability to adapt to dryness and the Andean volcanic soil’s high salinity has led to the spread of its production over the region during the 1970s. Initially, the quinoa production was local; however, the tendency has changed over recent decades. Growing international demand has made its exploitation increase from 10,000 hectares and 5,000 tonnes per year to 50,000 hectares and 25,000 tonnes annually.

This shift has altered the ancestral production technique based on two years of resting period to ensure the soil’s recovery. It has also boosted the use of chemical fertilisers to stimulate plant growth. Consequently, the region has suffered an accelerated desertification process that destroyed any other local plants used to feed Llamas, the second largest industry in the Andes mountain range.

Until the first half of the 20th century, the vast majority of urban centres located in the Andes mountain range were composed predominantly of a few high-income families. Increasingly, many locals from rural areas migrated to the cities in order to survive. Due to the rural exodus, up to 67% of the La Paz Department’s total population lives inside its metropolitan area. In the last decades, La Paz city and El Alto, the second biggest city in the area, have absorbed approximately 74% of the Department’s interregional migration.

This increasing urban concentration at the expense of rural populations explains the food shortage that La Paz city experienced in October 2019, after some massive protests against the official national election result. The city’s food import dependency at the time rose to 70% of the local market’s available basic goods. The decreasing native production forced the local authorities to implement rationing schemes to feed the entire population.

Even though Bolivia has experienced an improvement in its hunger and malnutrition indicators over the last decade, the WFP pointed out that about 20% of the Latin American country’s population was at the edge of food insufficiency just before the outbreak of the COVID-19 pandemic in March 2020, due to this uncontrolled population displacement.

The solution comes through urban agriculture

Since 2013, some local NGOs have launched several initiatives to confront the food sovereignty challenge in the La Paz region. Fundación Alternativas, which has been working towards strengthening urban agriculture in La Paz city since October 2014, put pressure on the local authorities until they gained official permission to settle the Lak’a Uta organic garden in the abandoned park that later gave its name to the project. This was an area urbanised by the La Paz local council (Gobierno Autónomo Municipal de La Paz) in a rush to accommodate the rural exodus towards the city and had suffered over sixty-three landslides in the last 23 years, including the Cotahuma tragedy that led to the death of at least eighteen locals in 1996. Nowadays, over 40 families profit from a land plot, producing more than twenty-five different vegetables and aromatic plant species.

“For us, this garden is a symbol of hope. It brings us an open space for sharing and learning. I am glad to be part of this pioneering project”

In 2019, I had the chance to work at the Lak’a Uta organic garden and interview people who donated time and energy to the garden’s mission. “Many locals believe that growing vegetables without greenhouses in the city is impossible, but our project has proved that this widespread thought is untrue”, argued Mariela Rivera, the agricultural engineer of the organic garden. For most locals, the city’s lack of green areas represents an issue for the next generation, who mainly ignore the traditional production techniques.

“For us, this garden is a symbol of hope. It brings us an open space for sharing and learning. I am glad to be part of this pioneering project”, said Jhannettee Plata, an experienced local engineer who has been part of the Lak’a Uta family since the very beginning. “My two kids enjoy working the land with their own hands. In my opinion, having environmental knowledge is essential. We do not have many green areas in the city and, as a consequence, many children ignore the properties of nature”.

More than 6,000 local citizens have already taken part in the Lak’a Uta field’s environmental workshops throughout the year. Visitors take part in a guided tour and a sowing workshop taught by local and international volunteers. Recently, Lenka Nemer, the newly crowned Miss Bolivia, declared her sponsorship of this regional initiative and her commitment to promoting urban orchards in Bolivia as a way to reduce the significant food insufficiency that affects the country.

The turbulent Bolivian political landscape over the last two years, as a consequence of the massive protests after the national election in October 2019, as well as the outbreak of the COVID-19 pandemic, have shown the executive branch’s lack of response to resolve the food and health crisis that the country is currently facing.

“Since the beginning, the Lak’a Uta organic garden has successfully confronted many challenges, and I am convinced that once again, we will overcome these new challenges. I love my job for that reason. We are the mill that resists the storm”, affirms the agricultural engineer Mariela Rivera. Maintaining her sense of humour, even in the face of adversity, she transmits confidence in every word that she says. The triumph of growing food in La Paz in this belligerent context is due to her and her team. We can trust their capacity to pass on their knowledge all over Bolivia and the Andes region.

Juan Torregrosa Rodríguez is a Spanish journalist specialised in Mediterranean affairs and migrations. He was engaged in a food security project in the Bolivian Andes with the Chilean NGO América Solidaria. Currently, he is part of the Spanish think tan La Puerta de África that aims to change the external vision of the African continent. He is part of a social transformation communication project in the southern Spanish city of Seville through a radio podcast channel.