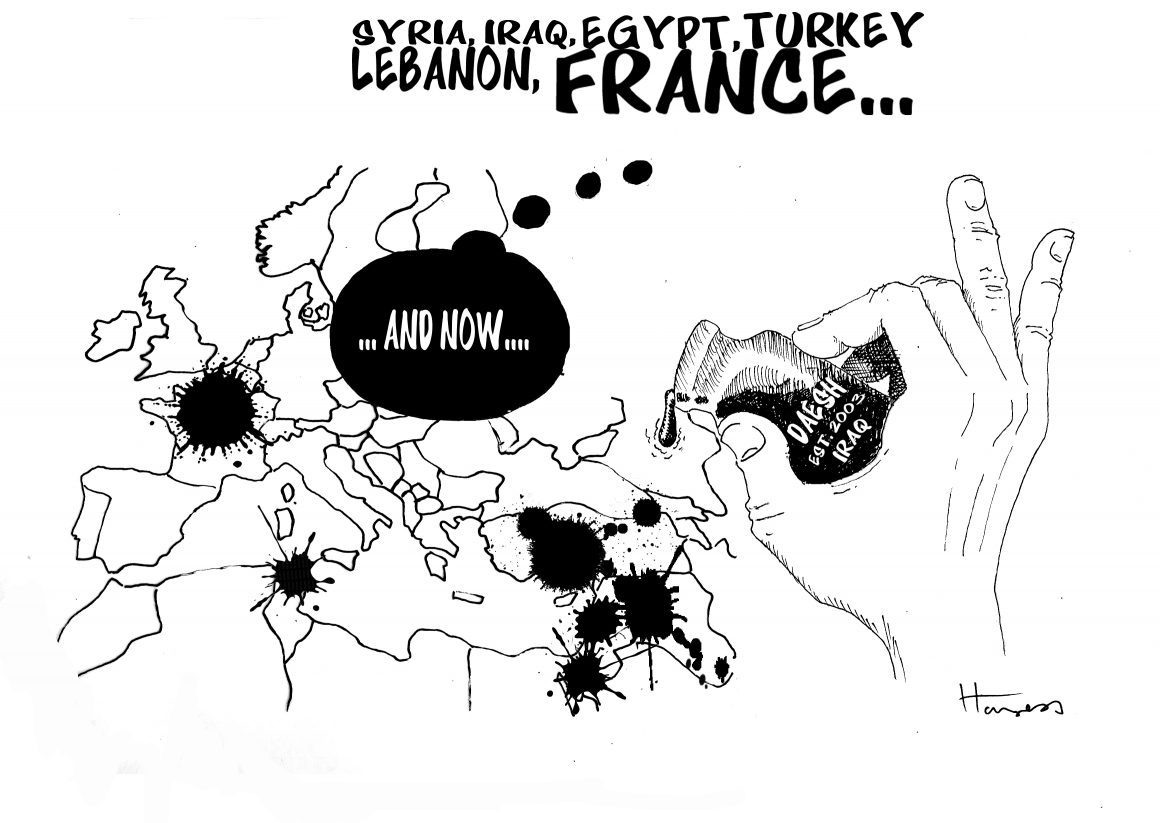 At least 30 dead and dozens wounded in various terrorist attacks in Brussels. Explosions were reported at Brussels Airport in Zaventem causing 13 deaths shortly after 8 am. According to Belgian officials at least one suicide bomber was involved. More than twenty deaths resulted from a separate explosion at Maelbeek metro station, located near the European Institutions. ISIS claimed responsibility for the attacks.

Salah Abdeslam, the sole-surviving suspect in the Paris terrorist attacks, has been taken into custody in Brussels. Abdeslam, who is a French national and grew up in Brussels, has been the most wanted man in Europe after eluding authorities for months. Immediately after the attacks in November, Abdeslam had escaped across the French-Belgian border, his ID being checked by authorities, but his name had yet to be released as a wanted man. His fingerprints were discovered in the subsequent months in two apartments in Brussels and, most recently, Abdeslam appeared on security footage leaving a petrol station. He was finally apprehended in the Molenbeek neighborhood on Friday, 18 March, reportedly brandishing a handgun. Abdeslam was shot in the knee before being taken into police custody.

An attack in Ankara leaves at least 37 dead and 125 wounded. The explosive was detonated inside a car by one or two suicide bombers as it pulled next to a city bus. It is yet to be determined who exactly is responsible for the attack, though some are claiming that initial findings point to the outlawed Kurdistan Workers’ Party (PKK). Turkish president Recep Tayyip Erdoğan has stated that “Turkey has become the target of terrorist attacks due to regional instability.”

Ten dead and fifteen wounded in Istanbul suicide bombing. The perpetrator, identified as a Saudi-born, Syria-raised man, who had registered as refugee from Syria, detonated his explosives at the heart of the tourist district of Istanbul. The majority of the victims were German tourists. The Turkish and German governments stressed their determination to fight terrorism together, and Turkey proceeded to arrest several suspects. ISIS was suspected of masterminding the attack, although it had not claimed responsibility.

A video released by the Islamic State shows the killing of five men alleged to be spies for the UK. The “Jihadi John” style video features a man and a young boy, believed to be around 6 or 7, threatening the UK directly and claiming to be sending a direct message to Prime Minister David Cameron for “challenging the might” of IS. The five men who were executed were wearing jumpsuits and were taken to a desert location and shot in the back of the head after “confessing” to carrying out reconnaissance missions on behalf of British authorities. The man, speaking with a British accent, repeatedly points a gun at the camera as he makes claims to be preparing an invasion of ISIS fighters in Europe. The young boy concludes the video by saying, “We are going to go kill the kafir (non-believers) over there.”

It’s easy to dismiss the increasing drumroll of war in London and Berlin as the panic-fueled reaction of madmen who happen to be in power. Yet, the truth might be even more disturbing. Despite the thousands that went to the streets of London and across the UK shouting “Don’t bomb Syria”, despite the desperate calls from the local population in ISIL-controlled Raqqa “We can’t hide from the bombs.” Despite everything, Europe’s strongest nations go to war. The German Bundestag and the British Parliament have decided to join the US, France and Russia in their military campaigns in Syria. These campaigns…

The UK launched its first airstrikes in Syria, targeting the IS-controlled Omar oil fields in eastern Syrian. After 10 hours of debate, British MPs on Wednesday voted 397 votes in favour of military action against the terrorist group with 223 voting against such measures. British Defence Secretary Michael Fallon confirmed the airstrikes were successful against IS, or Daesh as they are also known, but have caused a wave of criticism in Damascus after this morning’s newspapers recapitulated the same disapproval of the West’s intervention. “Britain didn’t ask permission from Syria’s government,” said the state news agency. They insisted that if Britain and its allies do not follow Russia’s lead in coordinating with the Syrian government, no military campaign to defeat IS will succeed.

The hideous and deplorable attacks in Paris on November 13th have unleashed a wave of fear throughout Europe triggering the lockdown of the Belgian capital Brussels. The clocks were pointing at 1am on Friday 20th, when the Belgian government decided to raise the terror alert to its maximum, 4 out of 4, due to a “serious and imminent” threat similar to the tragic events in Paris claimed by the Islamic State, “with multiples attacks in different places,” said the Belgian prime minister Charles Michel. As a result, schools and subways were closed, the military with its armored…

Brussels continues to be on highest level of terror alert in the wake of Paris attacks. Belgium’s prime minister, Charles Michel, has extended the citywide shutdown due to a “serious and imminent” Paris-style terrorist threat. Security officials met today in order to discuss whether or not the state of emergency should be extended amid the worldwide manhunt for the Belgian national Salah Abdeslam, who is suspected among those who carried out the terrorist attack in Paris which killed 130 and seriously wounded hundreds more. He is expected to be hiding in the Brussels area equipped with an explosive device.

A raid of a terrorist cell to the north of Paris ended with eight detained and two dead. The group of presumed terrorists had been barricaded in an apartment in Saint-Denis. Among the two dead is Abdelhamid Abaaoud, the mastermind behind the attacks this past Friday in Paris, who had escaped and fled to an unknown location. The police investigations showed that the dismantled terrorist cell planned to attack in La Défense and Charles de Gaulle Airport. The prosecutor’s office confirmed the death of a woman who blew herself up with a suicide vest upon the arrival of the police at the apartment.

The terrorist attacks in Paris, in the night of Friday, 13 November, have shaken France, the rest of Europe and beyond. Although not the first major attack on the French capital in the course of this year, with the Charlie Hebdo massacre only some ten months earlier, this took terrorism to another level, in terms of audacity and coordination on the part of the perpetrators, and number of victims. With more than 120 people dead and almost one hundred more fighting for their lives, several suicide bombers and indiscriminate killings, this was a scene of Baghdad or Beirut enacted in the heart of Europe, like never before…

Islamic State claims responsibility for 128 killed, 180 injured and 90 in critical condition after coordinated attacks hit Paris. French president François Hollande has declared attacks in Paris an “act of war” and vowed to respond “mercilessly”. The attacks were orchestrated by 8 different assailants, 7 of whom killed themselves with suicide belts, attacking 6 different venues: bars and restaurants, a football stadium, and the Bataclan concert hall where the most deaths were inflicted. President Hollande has closed France’s borders and declared a state of emergency. This is the worst terrorist attack on European soil since the Madrid train bombings in 2004 in which 191 people lost their lives.

A jihadist terrorist cell has been dismantled in Madrid. The three detainees, of Moroccan origin and with legal residence in Spain, belong to a terrorist group with ties to the Islamic State (ISIS). According to sources from the investigation, the terrorists were ordered to “act now in Spain”. The leader was in charge of recruitment and indoctrination of those newly integrated members, who were ordered to carry out terrorist acts. Until now, Spain has detained 60 individuals related to Islamic terrorism and calculates that some 100 have traveled from Iraq and Syria to fight with Islamic State militants.

Five reasons why the West is losing the fight against radical Islam
EsGlobal article by Jesús A. Núñez Villaverde, 17 September 2015

Why is the strategy against Jihadist terrorism failing? A review of the major mistakes being made. Neither does the West speak with one voice nor is radical Islam a monolithic movement. Consequently, there cannot be only one single interpretation of the interaction between the two players. Still, it is possible to identify errors –some made out of vested interest and others as the result of simple ignorance– which would tend to predict that without a radical change in the strategy against what is commonly presented as a threat to world security, failure is just around…