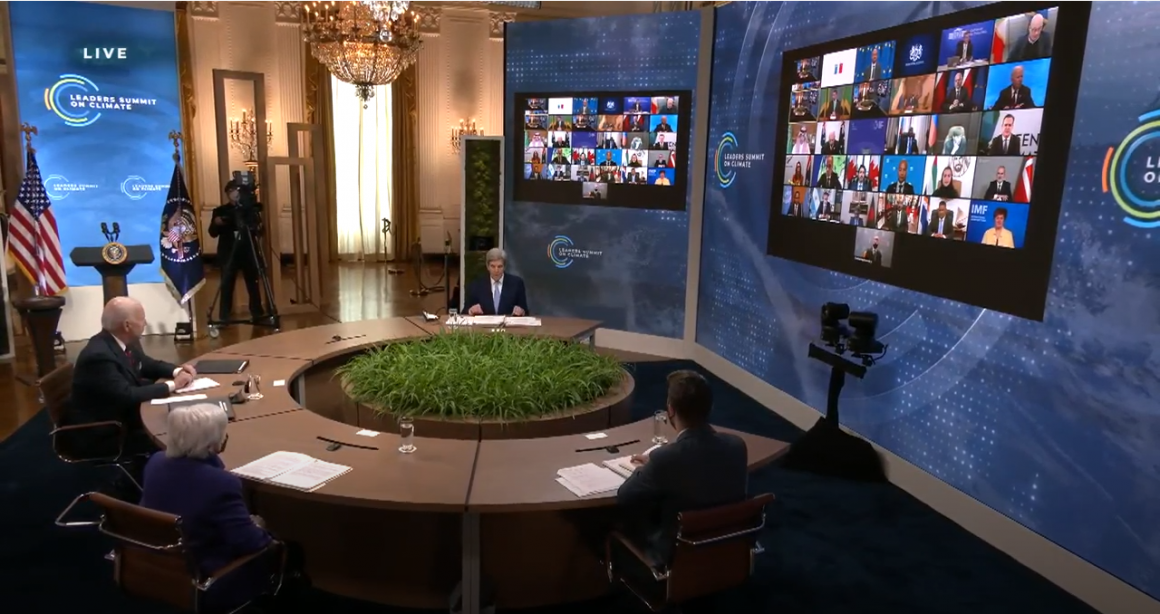 Screenshot from the live coverage of the Summit

Yesterday, as we celebrated Earth Day, forty world leaders gathered for President Biden’s “Leaders Summit on Climate”. The event, held virtually in accordance with COVID-19 restrictions over two days, is a precursor to the UNFCCC COP26 taking place in Glasgow later this year.

For such a large event to be organised and held within the first 100 days of a new US president’s taking office is impressive. From the very outset of his term, Biden has been clear that the US must regain its leading position in the fight against climate change and, so far, the President has been making strides in that regard.

In the opening statements of the event’s first day many world leaders, welcomed the United States back into the fold of global climate action, following the nation’s re-entry into the Paris Agreement. Comments made about the US’s absence could have been construed as jabs towards the last occupant of the oval office but, in truth, the sentiment seemed to be one of relief more than anything else.

The urgency of the matter was clear from the moment Vice-President Harris introduced the President for his opening remarks. The President struck an optimistic note regarding the upcoming COP, but was otherwise more inward-looking than expected, focusing quite specifically on the impact of climate change on workers and the economy, both in the US and beyond. It was a line of argument echoed by President Xi Jinping of China, whose opening remarks centred around the idea that by protecting and boosting nature, the world might also ‘protect and boost productivity’.

UN Secretary-General Antonio Gutteres gave a more international perspective, outlining what work there is to do for the international community, saying that ‘we need a green planet, but the world is on red alert. We are at the verge of the abyss. We must make sure the next step is in the right direction’. Bringing the coronavirus crisis into the discourse, Gutteres also made the point that the trillions of dollars being spent worldwide for pandemic recovery is ‘money we are borrowing from future generations’ which cannot be used to ‘lock in policies that [will] burden them with a mountain of debt on a broken planet’.

Working through a number of technical issues, which were to be expected at a virtual event such as this, the statements from various other nations differed in some regards, but all maintained the same underlying thesis – This is a problem that needs to be solved now, and we can only solve it together.

UK Prime Minister Boris Johnson called the summit’s attention once again to the importance of the upcoming COP and was also one of the first leaders to contextualise the climate crisis in terms of habitat and species loss. This was followed later by President Bolsonaro of Brazil, who pledged that the nation would strive to eliminate illegal deforestation by 2030, thereby protecting one of the world’s greatest assets against climate change.

The most moving statement of all, however, came at the end of the opening section, when Xiye Bastida of Fridays for Future was given the floor. The young activist migrated to New York with her family after her town in Mexico suffered flooding stimulated by climate change and has since worked tirelessly for the cause of tackling this global crisis.

Xiye began her statement by making clear the frustration of the youth movement she represents, saying,

‘I did not want to stand here and read our concerns and demands because if you had been listening, you would know what they are. Nevertheless, I think it is important for all of us to be on the same page from now and moving forward.’

This was to set the tone for her statement, in which she centred on colonialist, oppressive, market-oriented systems as the causes of the current crisis. She called into question why the 40 summit attendees were mostly representative of the ‘Global North’, nations for whom those systems often still work favourably.

Xiye echoed points made by Germany’s Chancellor Merkel and South Africa’s President Ramaphosa regarding the effects of climate change on developing nations, arguing that ‘the communities who are most affected [by climate change]… are not fully represented’.

In an impassioned speech focused around international targeting and exploitation of the Global South and indigenous communities, the young activist pulled no punches and, like her colleague Greta Thunberg, was unapologetically direct in picking out targets and calling out those who are failing to do what needs to be done.

‘Climate justice is social justice’, she went on to say, ‘we can no longer keep having summits and conversations around what needs to change because we already have all of the solutions that we need, so all we have to do is implement them.’

Bringing the start of the summit to a close, Xiye drew a line in the sand for the world leaders in her audience and, hopefully, cemented the tone of urgency for the COP yet to come –

‘You will often tell us, again and again, that we are being unrealistic and unreasonable. But who is being unrealistic and unreasonable with unambitious, non-bold, so-called solutions? You are the ones creating and finding loopholes in your own legislation, solutions, policies, and agreements. You are the naive ones, if you think we can survive this crisis in the current way of living. You are the pessimists if you don’t believe we have what it takes to change the world.’

The Foundation for Global Governance and Sustainability (FOGGS) will host an online event with leading experts on climate action and resilience-building on Thursday, 29 April 2021 on the topic: “Assessing President Biden’s Climate Summit: Is the dial moving closer to 1.5°C?”.

Make sure to attend the event, either on Zoom by registering here, or on Facebook, through the Facebook page of FOGGS. The event will take place on Thursday, 29 April 2021 at: