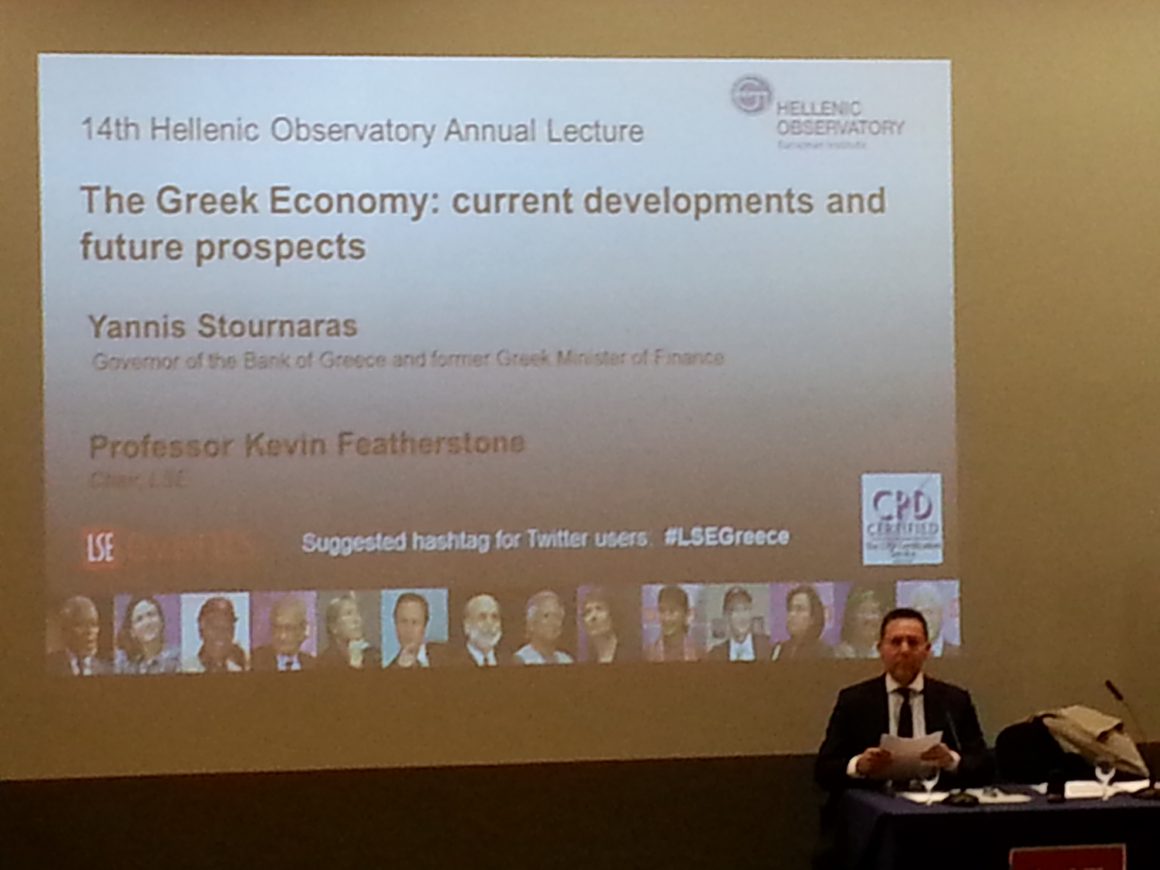 At a public lecture that he gave at the London School of Economics (LSE) on 25 March, which happens to be the national day of Greece, the Governor of the Bank of Greece and former Finance Minister Yannis Stournaras clearly stated that “Grexit” is not an option at this stage. He went on to explain that Greece leaving the euro would not deliver significant benefits, at a time when the Greek economy has stabilized and is showing strong signs of improvement after years of reforms. A Grexit now and the inevitable devaluations and capital controls that would follow it would risk prolonging the suffering of the Greek people, including through the termination of financial flows to Greece from the EU.

Mr. Stournaras was quite upbeat about what was achieved in Greece in terms of economic adjustments during the period 2009-2014, including a 25% Improvement in labour cost competitiveness. Imports have been declining and exports increasing, including exports in services, which were slow but rebounded in 2013 and 2014 in the key sectors of tourism and shipping. GDP has started to increase. Significant institutional changes have been introduced to streamline public administration, with a public sector reduced by 20% in terms of staff numbers through attrition. The taxation system has been drastically revamped and the banking system consolidated, with four core banks that performed well at recent ECB stress tests.

Without directly criticizing the Tsipras government that recently took office, Mr. Stournaras spoke of deteriorating indicators and increasing uncertainty in recent months. He expressed optimism, however, that things were back on track following the Eurogroup decision of 20 February 2015 and the high-level agreement reached in Brussels on 20 March 2015. He stressed the Importance of promoting long-term growth while speeding up structural reforms to increase competitiveness, strengthening the independence and efficiency of the tax administration, reviewing tax exemptions and favourable tax treatment, establishing a nation-wide asset registry, increasing public sector efficiency, ensuring speedy delivery of justice. This was a historic opportunity not to be missed.

Mr. Stournaras spoke of possibilities of alleviating the burden of debt servicing by extending maturities and reducing interest rates on the loans to Greece. The ECB’s quantitative easing would start to apply to Greece too from July 2015 if everything went well in terms of reform implementation. Responding to questions he said that there were enough tools to ensure that the country would not run out of cash and stop payments.

Mr. Stournaras was the guest speaker at the 14th Annual Lecture organized by the LSE’s Hellenic Observatory under the title “The Greek Economy: current developments and future prospects”.