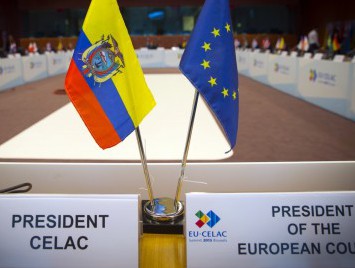 With the theme “Shaping our common future: working for prosperous, cohesive and sustainable societies for our citizens,” leaders of the European Union and Latin America came together in Brussels on 10 and 11 of June. The talks were focused on strengthening economic ties, fostering political dialogue and ushering in more openness in Latin American societies.

The summit, attended by some 60 leaders and senior government officials from both sides, is the second gathering ever of its kind. It shows a growing interdependence between the two continents as decision-makers look for common solutions to issues affecting the European Union, Latin American and the Caribbean.

For two days, EU leaders put aside concerns over the situation in Ukraine, Britain’s future in Europe and Greece’s inability to negotiate a settlement with its creditors to focus on the EU’s waning influence over Latin America and the Caribbean, most of which started as European colonies.  More than anything, however, the purpose of this summit was a much more hard-nosed consideration of economic and political interests.

At the end of the two-day conference, the European Union vowed to contribute €118 million to boost investment and economic development in the region. That hardly offsets the €200 billion pledge made six months earlier during a summit between China and the Community of Latin American and Caribbean States. Perhaps this is why the European Union felt pressured to up the ante and, as cash is currently scarce this side of the Atlantic, make use of its trade incentives instead . The EU looked to secure a patchwork of trade deals that have been dragging on for over 20 years.  It partially succeeded by getting the Mercosur group– consisting of Argentina, Brazil, Paraguay, Uruguay and Venezuela–to open up its markets by the end of the year.

The EU also went on the offensive with individual countries rather than pursuing inclusive regional deals. Thus far, Mexico and Chile will see deepening trade agreements with the European Union while, at the same time, Ecuador is in the process of implementing a free-trade accord with the 28-nation bloc. Five Caribbean states succeeded in obtaining visa-free travel to Europe, with citizens of Peru and Colombia able to travel to the European Union without a visa for a stay of up to 90 days.

One thorny issue on the summit’s agenda was that of EU-Cuba relations. In the wake of the recent recommencement of talks between Cuba and the US, the European Union is looking to normalize relations with the communist nation as well. Cooperation with Cuba was shelved in 2003 following a wave of repression against dissidents. In addition, the Union promised to establish a fund to help post-conflict areas in Colombia after ongoing peace talks between the government and Marxist rebels come to a conclusion.