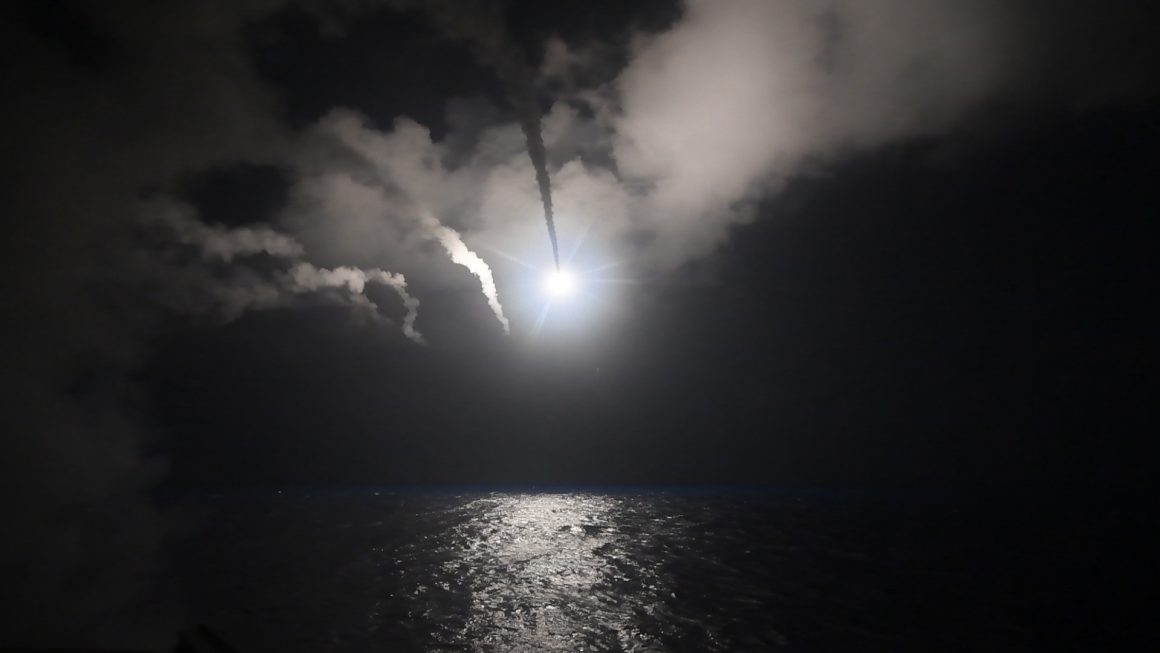 International finger-pointing will not bring justice for the chemical attack in Syria. With tensions running high, only a thorough investigation can reveal the truth and diffuse the critical situation.

The recent US airstrikes on the Al-Sha’ayrat airbase were the first time in six years that Washington has directly interfered in the Syrian conflict, and they bring to the surface memories of the US invasion of Iraq, in March 2003.

These warlike actions have triggered a diplomatic row throughout the international community. The question of who is responsible for the chemical attack in Khan Sheikhoum, in the district of Idlib, which killed dozens of civilians, remains open. It also seems clear that US President Donald Trump’s order for the raid was not only a knee-jerk reaction to the use of chemical weapons but should be seen in a wider geopolitical context. The blame game has started once again and the international community is deeply divided and apprehensive as to what will follow.

At the United Nations, on 7 April, US Ambassador Nikki Hailey delivered an accusatory speech blaming the use of chemical weapons on the Syrian regime. Hailey claimed: “Assad did this [chemical attack] because he thought he could get away with it as he knew Russia would have his back.” A different opinion was expressed by Democratic Congresswoman Tulsi Gabbard, who affirmed during a CNN interview that “what matters here is the evidence and the facts”, after having characterised Trump’s military airstrikes as “reckless”. In addition, Gabbard acknowledged being “sceptical” of Assad’s involvement in the chemical attack.

Moreover, CNN’s Wolf Blitzer asked Gabbard whether she believed the Pentagon’s claims of having evidence to prove Assad’s culpability. She replied that “they did not bring up that evidence before Congress, to the American people”, further adding that “they have not sought authorisation from Congress to launch this military action on another country”. The Congresswoman accused the US of for years “waging this war covertly through the CIA” in order to overthrow the Syrian government.

Meanwhile, on 11 April, US Secretary of State Rex Tillerson went on his first official visit to Russia with the arduous quest of trying to convince Moscow to choose sides. Tillerson posed a “friendly ultimatum” to Moscow, requesting that the Russians join the US and “their like-minded people” or remain on the side of Assad and Iran.

Syria’s Deputy Prime Minister Walid al-Moallem stated on Thursday, 6 April, that the Syrian Army did not use chemical weapons “even against the terrorists” who threaten their own people. As for Russian President Vladimir Putin, he considers the US strikes on Syria to represent “an act of aggression against a sovereign country violating the norms of international law”. Furthermore, the Russian leader requested the US to provide the evidence they claim to have: “Show it to UN observers and at the Security Council,” said Putin.

The recent veto from Russia at the Security Council on the draft US-UK resolution to punish Assad for the chemical attack thus came as no surprise.

The US attack hailed a low-point for trust between Russia and the US, prompting international reactions that reveal very different positions. Overall in the West, the main chorus of voices can be heard clinging to the premise that “Assad must go”.

Germany’s Chancellor Angela Merkel and French President François Hollande have attributed responsibility for the attacks to Assad alone. Merkel characterised the US airstrikes as “understandable”, given the critical situation in Syria.

The UK has also stood beside the US, with Prime Minister Theresa May demanding an investigation into the attack, while defending the view that Assad cannot stay in power. Yet, British Defence Secretary Michael Fallon stated that Britain would not be joining airstrikes in Syria. A different position was adopted by Peter Ford, an ex-UK Ambassador who gave an interview defending that it is “highly unlikely” that Assad or Russia were behind the chemical attacks. Ford claims that the Assad regime was aware that it would never have benefited from such an assault.

If this form of atrocity seems like an act of desperation, why would the Syrian regime jeopardise its reputation in a war in which it is has lately gained the upper hand? Equally odd is the immediate response by the US, just two days after the incident. A fact that gave the Russian Foreign Ministry an good opportunity to accuse Washington of “preparing the airstrikes” long before the attack in Idlib.

At EU level, Foreign Affairs chief Federica Mogherini was quick to respond to the chemical attack, saying that “there was a primary responsibility” from the Syrian government. However, on behalf of the EU, she has condemned the US airstrikes of 6 April. At the same time, following her recent official visit to Moscow, Mogherini reaffirmed the EU’s stance on extending Russian sanctions.

NATO’s Secretary-General Jens Stoltenberg said in an official statement that “the Syrian regime bears the full responsibility for this development”. The organisation’s chief further stated that “NATO has consistently condemned Syria’s continued use of chemical weapons as a clear breach of international norms and agreements”, even though, so far, no real proof of such accusations has been made public.

Turkey and the Israeli connection

Turkey belittled the US attack as a “cosmetic intervention” that will not serve to oust Assad. Israel and its security officials, meanwhile, said it was only “highly probable” that the chemical attack was carried out by the Syrian regime.

There is another surprising thing about Trump’s swift military response: the policy that he promptly followed was very much aligned with Hillary Clinton’s conviction, as revealed by Wikileaks, that “the best way to help Israel deal with Iran’s growing nuclear capability is to help the people of Syria overthrow the regime of Bashar Assad”, an ally of would-be nuclear power Iran.

According to the Syrian analyst Afraa Dagher, it was no coincidence that the US chose Al-sha’ayrat airbase as a target: “The Al-Sha’ayrat airbase was the place from which Syria fired anti-missile Sam rockets at attacking Israeli warplanes, two weeks ago. Syria downed one of the four warplanes, hit another and forced the remaining two fighter jets to quickly fly out of Syrian airspace.” Dagher believes Trump’s actions have sent a strong message of support to Israel, which continues its illegal occupation of the Syrian territory of Golan Heights.

Further research from the Canada-based organisation Global Research has brought to light information stating that the “Pentagon trained Syria’s Al-Qaeda “rebels” in the use of chemical weapons”. This piece of news was originally published in the British Daily Mail in January 2013, but it has vanished from the website after the controversy around the “mysterious” chemical attack followed by the US airstrikes on Syria. Furthermore, before these airstrikes, Assad gave an interview to a Cypriot paper, in which he pointedly stated that “to protect Europe from terrorists, (the West) should stop backing them in Syria”.

To add fuel to this diplomatic conflict, Wikileaks revealed US State Department plans to destabilise Syria and overthrow the Syrian government as early as 2006. Additional cables revealed the existence of CIA involvement on the ground in Syria, fomenting mass demonstrations as early as March 2011.

The leaks suggest direct involvement by the Israeli government in the plans to provoke civil conflict and sectarianism through partnership with nations like Saudi Arabia, Turkey, Qatar, and Egypt, aimed at demolishing the power structure in Syria in order to weaken Iran and Hezbollah.

According to Mint Press News, “It became then evident that the US, UK, France, Qatar, Saudi Arabia and Turkey would be jumping on to organise, arm and finance rebels from the Free Syrian Army.” In 2012, “The Group of Friends of the Syrian People” was created by these very nations with an agenda to oust Syrian President Bashar al-Assad. “The plan was to use a number of different factors to create paranoia within the Syrian government; to push it to overreact, to make it fear a coup,” said Wikileaks founder Julian Assange.

As always, global energy supply may shed some light on possible geopolitical motivations. According to one view by Dmitry Minin, published in May 2013 by the Strategic Cultural Foundation, based in Moscow, “a battle is raging over whether pipelines will go toward Europe from east to west, from Iran and Iraq to the Mediterranean coast of Syria, or take a more northbound route from Qatar and Saudi Arabia via Syria and Turkey. Having realised that the stalled Nabucco pipeline, and indeed the entire Southern Corridor, are backed up only by Azerbaijan’s reserves and can never equal Russian supplies to Europe or thwart the construction of the South Stream, the West is in a hurry to replace them with resources from the Persian Gulf. Syria ends up being a key link in this chain, and it leans in favour of Iran and Russia; thus, it was decided in the Western capitals that its regime needs to change.”

Russia and Iran, the alliance behind Assad, have warned that they will retaliate should red lines be crossed again. While the drums of war are being banged with increasing intensity and the investigations at a standstill, with Russia and the West unable or unwilling to agree even on basic facts, it is crucial to conduct an independent, in-depth investigation in order to bring to justice those who are responsible for the chemical attacks in Syria.