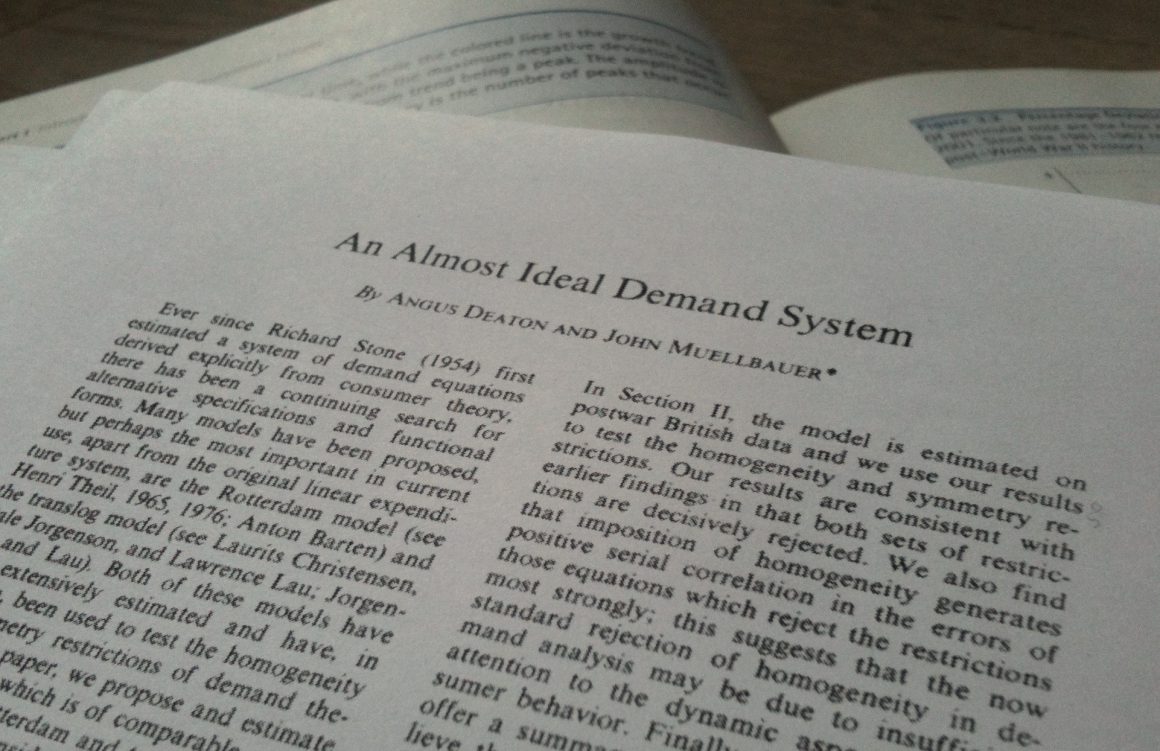 On 12 October 2015, Angus Deaton received the so-called Nobel Prize in Economic Sciences, which is in reality the Sveriges Riksbank (Bank of Sweden) Prize for his work on consumption. He is an economist from Edinburgh and professor of Economics and International Affairs at the Woodrow Wilson School of Public and International Affairs and the Economics Department at Princeton University. He will be 70 years old next week. Deaton’s main research focuses on the determinants of health in rich and poor countries as well as the measurement of poverty.

One of the reasons that landed him the Prize has been his ability to design a demand system. As it is known, for an economist to obtain such a prize, his or her theories have to have long-term value. The paper he issued on the demand system, called “Deaton and Muller’s Almost Ideal Demand System”, is from 1980. It allowed the measurement of an individual’s consumption, which is sufficiently general to provide the pattern of a whole society, but flexible enough to rearrange it and obtain a proper consumer behaviour.  That allows policy makers to gather sufficiently reliable data and to consequently make political choices, such as regarding the price indices and the tax distribution on different goods.

In addition, the Deaton Paradox allowed economists to understand that even if consumers’ incomes vary, the consumption does not necessarily vary at the same time, not more than what it is expected due to people’s anticipations. That is, Deaton contradicted Milton Friedman’s Permanent Income Hypothesis claiming that a rational being would consume more than what s/he actually has if he knows that her/his income will increase.

The third main aspect of Deaton’s research pointed out by Sveriges Riksbank Prize’s jury has been his capacity to show how to use extensive data on household consumption in order to measure and understand poverty and its determinants. Later he focused on gender discrimination within a family. He tried to pinpoint evidence exhibiting that adult consumption varies depending on the gender of their child. Although data did not give reliable results, later works showed evidence of clear discrimination.

During the press conference following the announcement of the award, journalists could ask Deaton questions by phone on what he thought about several news items such as migration phenomena or gender inequalities. Deaton could of course not answer the questions as he would have done in an academic paper, because he has not done any research on matters that are in the news today. He could only give his opinion, or only recall forecast based on data. He said, for example, “I do foresee a decrease in poverty” to a journalist asking him about today’s poverty rates, but he underlined that it is only a forecast.

The author of “The Great Escape: Health, Wealth and The Origins of Inequality”, Angus Deaton asks the question of how to help people get out of poverty. In his book he questioned the utility of international institutions in some of the poor parts of the planet. The book claims that sometimes the political power in place is too strong to let institutions do their job properly.

Chicago and Princeton are the two universities which are home to the most recipients of the Nobel Prize in Economic Sciences.

Three recent developments, two from the US and one from Europe, give us some reason to believe that a gradual end to hypocrisy and double standards may be coming about in the world of international affairs and diplomacy. They concern Iran, Syria and Saudi Arabia. In the latter case, you may have heard that the Swedish government decided not to renew a military cooperation agreement with the oppressive kingdom despite protests by the Swedish business community.

This week Saudi Arabia decided to recall its Ambassador to Sweden after Margot Wallström, the Swedish Foreign Minister, critized Saudi “human rights and democracy” standards. Wallström had been particularly vocal about the case of Raif Badawi, a Saudi blogger and activist sentenced to 10 years in prison and 1000 lashes for setting up a website called “Saudis Free Liberal Forum”. The Swedish Foreign Minister had described Badawi´s punishment as “medieval methods”.