Podemos (“We can”) is the only party in recent history to rise at the top of national electorate preferences in less than a year. If elections were held in Spain tomorrow, Podemos would win a decent, although probably not absolute majority in the country’s parliament (a poll published in January by EL País ranked Podemos first, with 28% of the vote).

The party was officially founded in 2014, and was born out of the Indignados movement, an heterogeneous platform created in Spain in 2012 to lead protests against the established political system. Podemos funds its campaigns through donations from the public and uses this to detach itself from the other traditional Spanish parties. Its fast ascension to the top of the political stage is surprising because it managed to put an end to “bipartidismo”, the two decades long political domination by two parties, the Spanish Socialist Workers’ Party (PSOE) and the People’s Party (PP). In less than a year, Podemos gained over 300,000 members and the potential support of almost 3.5 million voters through the set-up of an Internet-based network. The party already won five seats out of Spain’s 54 in the European Parliament at the May 2014 elections.

The success of Podemos is based on a rhetoric that resonates with the Spanish electorate. The party has made good use of its leader’s recurrent TV appearances (Iglesias was a frequent participant in several shows run by regional channels) and it has consistently propagated a discourse aimed at heavily criticizing the current political elite, identified as “la casta”, the caste. At a time when the Spanish voters are tired of unfulfilled electoral promises, high unemployment, social inequality, and widespread corruption by personalities linked to the political establishment, Podemos’ call for popular unity and for rebuilding real democracy from the grassroots up has a potent, albeit somewhat populist, appeal. 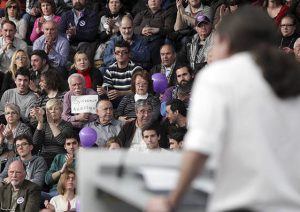 Podemos’ ideology is clear. It is a social movement that takes also the form of a party because it wants to change politics. It represents the new left, a neo-Marxist view of society that is critical of (class) inequalities generated by capitalism, condemns social and political oppression, and puts people at the center. Earlier forms of new left have been associated with the hippie movement in the 1960s, and indeed in its current incarnation the new left is supportive of environmentalism and feminism.

Despite its clear ideology, Podemos does not have a clear political program yet and uses confrontation with rival political parties to put its messages across. It wants free public education for all, and initially suggested that private infrastructure companies in Spain should be nationalized, but later eliminated this from its “to do list”. Podemos’ large public exposure, especially that of the founder of the party and political sciences professor, Pablo Iglesias, has helped to increase its popularity.

As part of its campaign for the May 2014 European Parliament elections, Podemos had proposed democratic/ parliamentary control of the European Central Bank and a European public credit rating agency. It also advocated for citizens to be awarded a basic minimum wage in compensation for their citizenship and was against the free trade agreements between the EU and the USA. Podemos’ five elected MEPs insisted to be remunerated with three times the minimum Spanish wage (little less than 2,000 euros per month), rather than the normal MEP salary of around 8,000 euros. 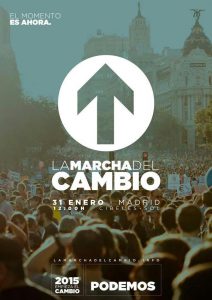 Apart from this reasonably successful campaign for the European elections, the party’s activities have also included an anti-austerity protest in Madrid’s Plaza del Sol on 31 January 2015. The protest gathered tens of thousands of people marching for change. Their slogan, “Claro que podemos” (Of course, we can) is a powerful reminder of the first Obama campaign, who bet on the people’s desire for change. Next major step is to stand for the upcoming Spanish general elections in December 2015, with an expected dynamic entry to the Cortes Generales.

In terms of internal organization, the party has gathered citizens in “circles”, which are geographic or thematic, physical or virtual assemblies that function according to instructions distributed by the leadership . So far scores of such circles have been formed in Spain to voice the citizens’ political initiatives. A larger assembly, the party’s congress, was also set up in October 2014 and voted for improving public education and healthcare, anti-corruption measures, the right to housing, and the restructuring of the debt.

The rise of Podemos has not been without some hiccups. One of the party’s leading members, Juan Carlos Monedero, reportedly advised the Venezuelan government for five years under president Hugo Chavez. He is said to have worked with Bolivia, Ecuador and Nicaragua in negotiations to form a monetary union. According to media reports, Monedero received 450,000 euros for his consultancy services, money which he took through a firm set up for this purpose. The firm allowed Monedero to pay a lower tax on his personal income.

Following the reaction of members of PP and PSOE, and of some media outlets, Monedero paid 200,000 euros to the tax authorities in December 2014 to make up for his past mistakes. Although Podemos claims that Monedero’s fraud issue has been resolved, political parties who lost votes to Podemos are using this to accuse the party of double standards. 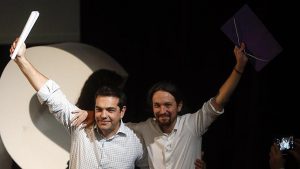 Something to watch is the close relationship that Podemos has with Syriza, the left-wing party that recently won national elections in Greece. An eventual compromise in the Syriza governments’ negotiations with its European partners and creditors may undermine Podemos’ uncompromising rhetoric, or may strengthen it if portrayed as a first success against the agents of neo-liberal austerity.