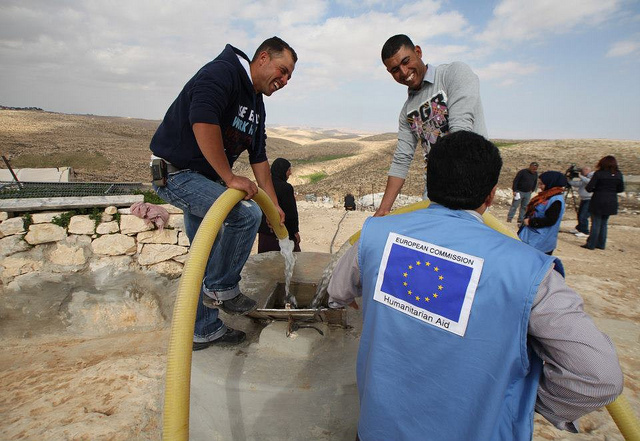 Development is about poverty. While the richest 1% of the world’s population owns more than the rest of the population combined, 14.5% of people live in poverty. Motivated by a 2013 Euro barometer – showing that eight out of 10 EU citizens think it is important to help people in poor countries, but only 66% know exactly what this means – the EU has decided to raise awareness of its development work, by labeling 2015 as the European Year of Development. The President of the European Commission, Jean-Claude Junker, inaugurated the Year of Development on 9 January in Riga, Latvia.

The tradition of assigning different themes to each year goes back to 1983, when the first European Year was dedicated to small businesses and the craft industry. A European year dedicated to development shows consistency with the EU’s core activities. Through its development work, the EU aims to reduce poverty mainly in developing countries located outside of the EU’s borders. Programs have been run since 1957, when a special Fund was created as part of the Treaty of Rome. Member states agreed to support their former colonies after their independence, and gradually extended their aid to other developing countries. Soon the EU became a major actor in the global fight against poverty. Development aid given by the EU institutions, together with aid given by each EU member state, now accounts for more than half of the world’s aid. In 2013 the total contribution of the EU and its member states to aid globally was € 56.5 billion.

A 2013 Euro barometer shows that eight out of 10 EU citizens think it is important to help people in poor countries but only 66% know exactly what this means.

The EU’s decision to designate 2015 as the Year of Development is also fine-tuned with international politics. Two important events will shape the current global development framework. First, the eight Millennium Development Goals set in 2000, to guide development aid and keep track on its progress, will be revised and updated this year. The goals promoted gender equality, education, and addressing hunger and disease among others. Second, a global agreement on climate change will be achieved this year. The agreement will most likely trigger not only more attention to climate change, but also the preference of governments to finance aid programs with a component of environmental protection. Development that takes into consideration economic progress, social equity and environmental protection is considered sustainable, and is at the centre of the global efforts to fight poverty.

Development that takes into consideration economic progress, social equity and environmental protection is considered sustainable and is at the centre of the global efforts to fight poverty.

The achievements of the EU’s development aid have been significant. EU funds have contributed to enrolling some 13 million children into primary education, and to the immunisation against measles of another 18 million children. In addition, the Union and its member states represent the biggest donor in energy worldwide, and the largest contributor to programs protecting biodiversity and improving forest protection.

In practice, the EU gives aid to developing countries in the form of projects (a series of activities to reach specific objectives in a given timeframe), grants, contracts or budget support (financial transfer to the receiving country’s national treasury). It usually involves financial aid but can also include technical support and equipment.

Development aid is given through a variety of EU financial instruments and cover different areas: environment, security, trade and humanitarian emergencies. As it can be a powerful foreign policy tool, aid is often linked to the political and economic relationships between the EU and the recipient countries. This is also the reason why European development aid is often subject to conditions imposed by the EU on the recipient countries. This, however, has been largely criticized as paternalistic and ineffective, and its practice has been reduced in the past few years.

This year the EU will inform Europeans on development work through different activities under the motto “Our world, our dignity, our future”. The activities will follow themes assigned to each month (January: Europe in the World; February: education, etc) and include an exhibition on food security in Milan, an official website with information for the general public, and a high-level forum in Brussels in June. Each member state will also organize outreach activities at the national level.