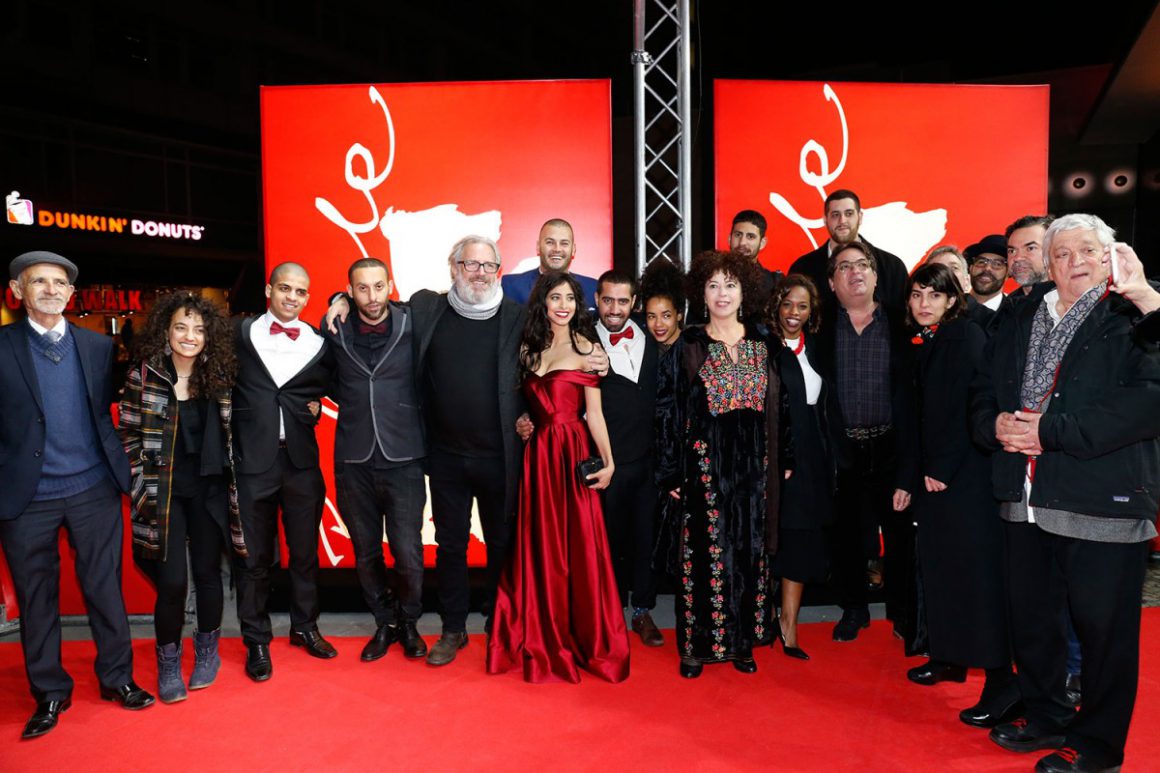 Udi Aloni’s new feature film, the winner of this year’s Berlinale Panorama Audience Award, is one of two Israeli films at the festival having the word “junction” in their title. Can one see this as a sign that Israel is standing at an important crossroads in its history? Katoikos.eu spoke to the director and the Palestinian leading actor, Samar Qupty.

“Ana mish politi (I’m not political),” sings Kareem, a young Palestinian rapper from a stage, improvised on the ruins of his friend’s house, which Israeli bulldozers flattened down to make space for the planned Museum of Coexistence.

The story of Junction 48 takes us to Lod — or Ludd, as it’s pronounced in Arabic — a small town with a mixed Jewish-Arab population just a few kilometres away from Tel-Aviv, in Israel proper. Kareem (played by Tamer Nafar, who is a rapper himself and the co-author of the script) and his girlfriend, Manar (played by Samar Qupty) use their songs to fight both the discrimination by the State of Israel and the violent patriarchal conservatism in their own community.

However, Junction 48 is a political film, which does not content itself simply with pointing fingers. “Obviously, you cannot make a film about Palestinians without it being political,” says Qupty. “But you don’t have to put politics in the foreground. Instead, we tried to show politics as an integral part of our daily life.”

“The Arab society is very conservative, it sees powerful women as a threat,” says Qupty. “Hence, as an Arab and a Palestinian woman living in the State of Israel, you face multiple levels of oppression at once. That’s hard, but it also makes your will to change things stronger. This is who Manar is. But she is not the kind of rebel that simply abandons tradition. In fact, she appreciates the good things about her society. Instead, she uses her art, her songs, and her love for Kareem as a particular way of struggle from within.”

“It’s very easy to express struggle pathetically,” adds Qupty. “Struggle is usually associated with demands, protests and demonstrations. But that’s only a small part of the struggle. We’ve been occupied since 1948. It has been 68 years now and the new generation is tired of being pessimistic. Instead, it transforms the powers that push it down into art, into music. That’s our new struggle, our new revolution. It’s our new revolutionary way of life, if you want.”

Aloni (born 1959) is by all means a habitué of Berlinale. Junction 48 is his sixth film at the festival. A son of the late Israeli politician Shulamit Aloni (1928-2014), who was the leader of the progressive Meretz party and a Minister of Education under Yitzhak Rabin, Aloni is a filmmaker, writer, and visual artist known for his radical interpretations of the Israeli-Palestinian conflict.

Katoikos.eu: You often speak of binationalism. Do you see it as alternative to the lasting stalemate between the aspired two-states solution and the one-state reality? Is it at all realistic?

Udi Aloni: Israel is indeed the only true democracy in the Middle East — for the Jews, that is. [laughs]

For me, binationalism is primarily a cultural notion. It means keeping one’s particularity — whether Jewish or Palestinian. It is based on the concept of community and of difference both between communities and within them. My friend and teacher, [the Palestinian poet], Mahmoud Darwish expressed this idea well. He wrote:

Let us go together in two separate paths.

Let us go together

and let us be kind.

Katoikos.eu: Can Europe do anything to help solve the conflict?

Aloni: First, Europe should abandon creating this fiction of two states. The European leaders seem reluctant to understand how we [the Israelis and the Palestinians] are entangled with each other. My recommendation is thus: First of all, see it as it is! See, for example, what it is to be a Palestinian citizen of Israel! 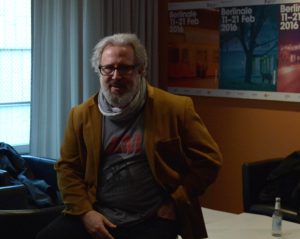 In all my meetings with the Europeans, they would tell me: “Bring us one Palestinian and one Israeli.” I say: “Okay, but only if the Palestinian is a citizen of Israel. I will not bring you one who is under full occupation and let you celebrate normality. I’m against normalization.” They say: “But this is an Israeli Arab!” I say: “No, his family is in Gaza, in Ramallah, in Sabra and Shatila.”

In my opinion, the binational opportunity is the only way to survive this place. The flip-side is Bibi Netanyahu’s paranoia and an ever-tighter enclosure. Gaza is already the biggest ghetto in the Middle East. Soon enough, Israel itself might become an even bigger ghetto.

However, I also don’t think the solution will come from the West. Of course, Europe, including Germany, should stop giving weapons to Israel. Europe and America must stop supporting the colonialist powers in Israel. But binationalism has to be a Middle-Eastern thing. Maybe, in that regard, Europe should move aside.

Katoikos.eu: What is the role of art in this? And how do you see your political role as a filmmaker?

Aloni: What is art? Art is a possibility to open possibilities. Unfortunately or, maybe, luckily so, we’re not going to change the world through art. But we offer a different possibility to see it. The statement of the film lies in its performative act. After all, it was an opportunity for Tamer, myself, and the entire crew — a mix of Israeli Jews and Palestinian Arabs — to function together.

We created our Noah’s Ark. At some point, the Flood in the region will be over: the craziness of the Israeli government with its hyper-vanity, ISIS’ fundamentalism in the void left by colonialism, etc. All this cannot continue for too long; it will fail. The question is: When it ends, what will be waiting there? My hope is that it will be a community similar to our ark.

For now, the situation can be described by a well-known line from the Communist Manifesto: A spectre is haunting the region — the spectre of binationalism. And all the powers there have entered into a holy alliance to exorcise this spectre.

Katoikos.eu: The most refreshing thing about your film is, perhaps, that it couldn’t care less about political correctness.

Aloni: We have the most racist jokes about each other, Tamer and myself. What could be more fun than that? After all, we know that it comes from our universality, from our common fight both against the occupation and against honour killings of Palestinian women by their own community.

People often find this complexity hard to handle. When I say “I fight for Palestinians,” people say: “Here’s a self-hating Jew.” But for me, the only way I can practice my Jewishness is to be in total solidarity with the Palestinians. One should leave the narrative of the Other and be Br-other! It is an entirely different stance. Curiously, this other–brother thing works even better in Hebrew, where “other” (akher) has “brother” (akh) in it.

Katoikos.eu: Was it a conscious decision not to try to present the complexity of the political situation and not to underline the “fundamental” victimhood of Palestinians?

Aloni: In the big fight between Noam Chomsky and Slavoj Žižek, I take Žižek’s side. Chomsky thinks that if you just show people the truth, they will choose the right way. It’s a typical American understanding. According to Žižek, trauma or ideology will always block your view. When you look at the sun, you become blind. Hence, it would be futile to simply show the truth of occupation. I feel I can only change something by deconstructing the ideology that prevents people from seeing the truth. In a way, I’d be happy if your readers didn’t focus only on my radical political statements but let the film speak for itself, go under their skin, see its dream.

Katoikos.eu: Both Žižek and the French philosopher Alain Badiou are mentioned in special thanks. What was their role in the film? 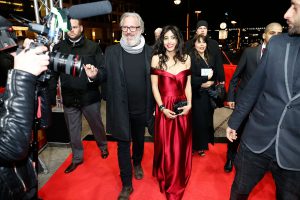 Aloni: These were just my personal thanks. I feel I owe them a lot. Both of them adored the film, which was a bit of a surprise to me, actually. I thought that I finally made a film that says “Fuck you, philosophers!”

People often make a distinction between intellectual films and films about life. But, in Judaism for example, the Tree of Life and the Tree of Knowledge have the same roots. And this is perhaps my first film, in which I could finally put the two together.

Both the philosophical ideas and the ruling ideology are there — they function in the film without being seen. If I did well as a director, the viewer will not feel either, while being in the very midst of it. A good film is like a homoeopathic medicine. It remembers its active ingredients without actually containing them.