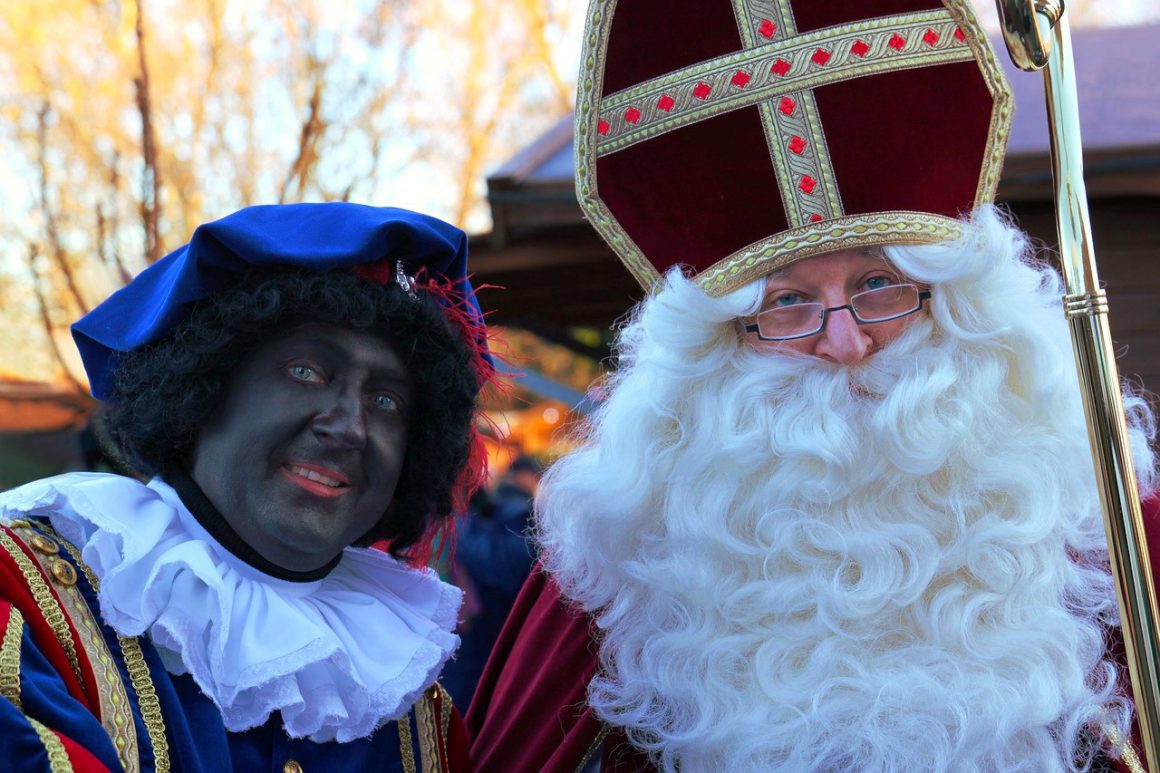 Two people in the Netherlands dressed up as Zwarte Piet and Sinterklaas (Photo: Pixabay)

Loved by children for generations, Black Pete has become a symbol of a struggle at the heart of Dutch society. Is he a harmless tradition or a racist hangover from the colonial past?

On 28 August 2015, the New York Times reported that a United Nations committee had urged the Netherlands to get rid of Black Pete (Zwarte Piet), a popular children’s character that appears every early winter – and has done since time immemorial – as the helper of Saint Nicholas (Sinterklaas), the ancestor of Father Christmas.

The UN committee took issue with Black Pete because white people use blackface make-up, go around with exaggerated red lips and gold hoops in their ears, talk with an accent while dressed up in exotic attire and act silly. The United Nations Committee on the Elimination of Racial Discrimination wrote in their report, that “the character of Black Peter is sometimes portrayed in a manner that reflects negative stereotypes of people of African descent and is experienced by many as a vestige of slavery”.

The Dutch government responded by dismissing the idea of banning the character, possibly in a vain attempt to dam what they considered could become a wider populist backlash. The discussion on whether Black Pete was racist, which had already been lurking for some time in the background, has split Dutch society in two irreconcilable halves ever since.

It is difficult for people living outside of the Netherlands to imagine the importance of Sinterklaas and Zwarte Piet for Dutch society and the collective imagination. All children have grown up with the illusion that Sinterklaas and his entourage bring them presents on Sint’s eve, 5 December. Since the 19th century, Sint and his Black Petes have arrived by steamship, an event now televised live on national television. This is three weeks before the actual event, so for three long weeks, all the children sing special Sinterklaas songs and put their shoe every night in front of the chimney to exchange a carrot or hay for Sint’s horse for a chocolate letter or some ginger cookies. The presents distributed on Sint’s eve normally go accompanied with rhymes making cheeky comments on the receiver’s conduct during the year.

The celebration of Sinterklaas or Nicholas of Myra is a longstanding tradition, going back to the Middle Ages, when he was revered as the patron of sailors, children and prostitutes. Even though his cult spread out over large parts of North-Western and Eastern Europe, it has become an intrinsic part of current Dutch national identity. Of late, however, Sint’s helper, Black Pete, has come under fierce criticism, seeing the cheeky moral lessons of the Sinterklaas tradition backfiring on itself.

Staunch defenders of Zwarte Piet see it as an unalienable part of Dutch tradition. At most they will admit that once upon a time, Black Pete was used to scare young children, so they would behave well. Over time, however, he has grown into a friendly and funny character, someone who helps old Sinterklaas shove presents down chimneys – a convenient way to explain his blackness. Who could possibly object to that? Most importantly, those who cherish this tradition should not be mistaken for racists.

Critics of Black Pete, pointing back to the 19th century invention of this tradition, underline the biased representation of this character. At any rate, if Black Pete slides down chimneys, why does his face need to be painted black completely and not just covered with black stripes? Why the accent and the blown-up lips? As an alternative they have come up with Rainbow Petes, Grey Petes, multi-cultural Petes and even Fairy Tale Petes. Defenders of the traditional Black Pete retort, in turn, that this would upset their children. And what happens with the age old Sinterklaas songs?

Since last year, Dutch national television began – hesitantly at first – to show awareness about this problem. As the Mummers Parade in Philadelphia shows, however, banning the Black Pete figure from the Dutch streets will be a difficult task.

What’s more, the United Nations themselves should be more even-handed with their scrutiny. Whereas they have condemned the Dutch tradition of Zwarte Piet as racist, they have put a similar character from Persian tradition, Hajji Firuz, on the Unesco World Heritage list.