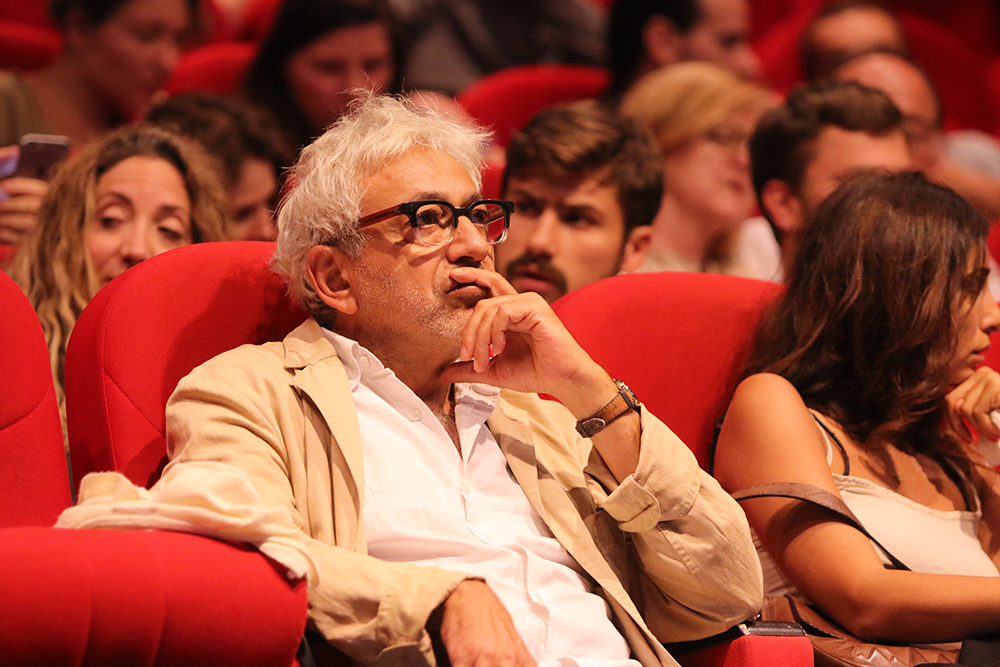 On the role of the engaged art in an increasingly globalized world and old and new Jerusalems.

Nazareth-born filmmaker Elia Suleiman (1960) served as President of the Jury at this year’s, 22nd Sarajevo Film Festival. He is known for an emphasis on tender visual storytelling instead of dialogue. The tragicomic style, with which he depicts the absurdities of life in Israel–Palestine, is immediately recognizable.

We sat down at the terrace-café of Hotel Europe, which, like the rest of Sarajevo, bustled with festival activity in August 2016. For its centuries-old multiculturalism, this half-a-million-inhabitants city is nicknamed “Jerusalem of Europe.” And each year, it hosts an additional 100,000 film festival guests.

Daniel Tkatch: Mr. Suleiman, what is the political role of a filmmaker?

Elia Suleiman: I feared you were about to ask me to comment on the peace process in the Middle East, but this question can be answered.

The political role of a filmmaker isn’t very unique, since it is not just about making films. For filmmakers — as well as for artists and intellectuals in general — it depends on acquiring an ethical position vis-à-vis the world. But, I also think everything is political. We live and, therefore, we are right in the middle of politics. The way we exercise our freedom, the way we look at or communicate with each other is already political. A film can only be political or anti-political; it’s never apolitical.

What I do is, nevertheless, not political by strategy. For me, composing a poetic image is a political act. Furthermore, I consider it anti-political to actually strategize and make pointed and explicitly political statements in films.

It is the aesthetic dimension that determines your commitment to the world. A truly political film creates an open space, in which the spectator is able to emancipate him- or herself by co-producing the meaning of the image you provide. The political cinematic image is democratic precisely by not being excessively pointed and linear. And making such an image really comes down to art.

I don’t think films — and critical or engaged art in general — have such immediacy. Besides, looking at the world today, it’s difficult to be as optimistic. The global manufacturing of destruction takes place at an unprecedented pace — much faster than our political engagement, in terms of what art can do by raising critical questions. Perhaps, the sum total of an authentic artistic act is to show this very inability.

DT: Where do you find hope under such unpromising circumstances? What motivates you in your work?

First of all, I tend to think that if you aren’t as pessimistic as I am, you should look at what is happening and re-evaluate your position. Since the start of the industrial revolution, when did humanity ever experience as intense a hopelessness, with the exception perhaps of the two world wars?

But let’s contextualize this pessimism. If I were despaired and thought there is nothing to be done, I wouldn’t be sitting here with you, helping young filmmakers with their work at the festival’s masterclass, or thinking of making another film myself. 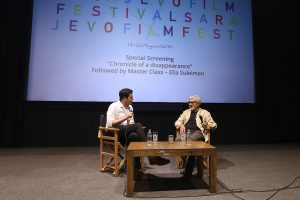 Where does my hope originate? What is it trying to achieve? These are difficult questions. But despite my pessimism, I do feel hope. And I am definitely not despaired. We have to try to block the negative developments, to stop the global regression.

I believe that in an increasing number of communities, there is a growing awareness of how to tackle and resist the global power structures, which are, as they stand today, but a complex set of mafia-like relations. In this sense, perhaps, the situation hasn’t ever been better.

For example, look at the situation with regard to awareness vis-à-vis the situation in Israel–Palestine. The politicians around the world were used to sympathise with the Palestinians out of self-interest or plain hypocrisy. The example of the BlackLivesMatter movement in the US shows that people can develop consciousness of what is happening in Israel–Palestine by developing a certain unconditional identification due to race, gender, or other issues that they themselves experience.

Is there a dialectic link between the worsening of the situation and the growing awareness? Can the awareness stop the regression? I have no answer to that.

And this does not concern only the questions of political justice, it is also about ecology — the air we breathe, the water we drink, the food we eat —, as well as about global poverty; the results of globalization and its marvellous success at destruction. But again, I doubt that art or social movements can block any of that directly.

The monotony of [Noam] Chomsky’s writings shows that he feels something similar: he keeps saying that it’s almost over. If you look at the titles of my films — Chronicles of Disappearance (1996), Divine Intervention (2002), The Time That Remains (2009) — there is also that. And while I cannot reveal the title of my next film, I can say it does follow the pattern.

DT: When I came to Sarajevo and woke up to the polyphony of muezzin calls and church bells, I thought I am in a better version of Jerusalem. As a Palestinian and a citizen of Israel, what is your perspective on the conflicts in the Balkan region in the aftermath of the Yugoslav Wars?

I don’t know whether my birthplace still has much to do with the way I see other regions. Having lived long enough in the diaspora, one starts to identify with events globally: one re-energizes the soul of one’s internal wandering Jew and not necessarily the nationalist aspects of one’s self. Hence, I’m not concerned with one geographic area in particular. Moreover, I think it has become evident that Palestines exist wherever one goes.

DT: Is it in this sense that you once claimed that Palestine represents all of the conflicts of the world?

Yes, but also vice versa: many conflicts now represent Palestine. The only specificity of the conflict in the Middle East is the combination of Arabs and Jews, as well as the fact that many Israelis and their forefathers suffered from antisemitism in Europe and, ultimately, the Holocaust. But if you think about genocides as such, there is Africa, Armenia, you name it… Can Palestine’s case really qualify as the most tragic one? I think the problem has long become global.

I find it utterly ridiculous that some people are still stuck in a nationalist world view, when soon we might not even have drinkable water on our planet; that there are people who still fight about land, when land has become so polluted. I find it utterly horrendous that there are fascists or neoliberals in governments of today’s world, and that, hand in hand with the effects of globalization, they are putting up more walls, more checkpoints. It’s a mess. Everything is on edge.

DT: You seem to opt for a type of cosmopolitanism: if the problems are increasingly global, there is no point in talking about one’s national heritage or perspective.

There is! Of course there is a point in that: a person living in the West Bank, has the Israeli soldier pointing his gun at him. All I’m saying is that over-localizing an issue without connecting it to the global situation is a big mistake.

DT: I got to know about you and your films only quite recently from Udi Aloni’s book What Does a Jew Want? It seems you are not extremely popular among the wide Israeli audiences. Why is that?

They don’t know I exist. I only exist for the security services. After my last film, The Time That Remains, a member of the Knesset [Israel’s parliament] wanted to declare me an enemy of the state.

DT: In his book Aloni defends a bi-national solution to the Israeli–Palestinian conflict. Do you side with him on this?

I know Udi Aloni and I believe that to have this kind of idealistic approach is the only way forward. I don’t believe in pragmatism. So I think Udi’s is an absolutely valid proposition. Is it realizable? Well… Ultimately, if one thinks of a just solution to the conflict, no alternative comes to mind. The two-state solution is a thing of the past, and the two peoples will eventually need to live together, in equality, without racism, etc.

But I don’t believe an occupier will want to easily give up the privileges of occupation. Also, I doubt that the Israeli government will ever want to accept millions of Palestinian refugees back into the country.

DT: You were teaching in Birzeit University in the West Bank, where, funded by the European Commission, you established a Film and Media Department. Retrospectively, are you happy with the result of that project? Is there anything the European Union could do to help resolve the conflict?

I am not sure I can answer your last question. I know what they asked me to do and what I did. I also know that after I left, the university authorities have decided to turn it from a cinematic department to a media department proper. The reason for that is that the technocrats believe in giving jobs rather than giving intellectual education and creating a space for critical thought. I tried to do the latter.

The European Union is just another power structure and, while it often has good intentions and sometimes even a good will, it also has its own interests in the region. Brussels will always decide based first on what is good for Europe and what isn’t.

Also, the EU has been seeing the region from an elitist point of view. They thought: let’s give them some cameramen, editors and anchormen. They didn’t necessarily think of intellectuals and thinkers. Other than dropping this attitude, I don’t really know what the EU should do.

Four years after its establishment, Katoikos is embarking on a new phase by joining the Foundation for Global Governance and Sustainability (FOGGS), a Brussels-based not-for-profit public utility foundation. The Foundation focuses on the development of a “Grand Narrative” for a fairer and more inclusive globalisation. According to the motto used by FOGGS, this Grand Narrative…