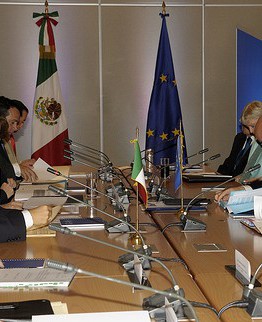 In early May, the renowned Brussels think tank CEPS (Centre for European Policy Studies), in collaboration with the bank BBVA, organised a meeting among high-level representatives from the EU and Mexico aiming to provide an overall review of the EU-Mexico trade relationship. The conference highlighted and discussed new opportunities, in light of progress and advances made by both parties, to revisit and enhance the EU-Mexico Free Trade Agreement so that each party is better served and may prosper to an even greater extent.

The objective of reviewing the current agreement, which has been in effect since 2000, is to increase bilateral trade and investment flows to contribute to the economic growth of both partners. Although Mexico and the EU have broadened the scope of the original trade agreement with the in 2008, the evolution of the world economic order, as well as energy and climate issues, necessitate an update. In this spirit, European Commissioner for Trade Cecilia Malmström highlighted the importance of promoting ‘good regulatory practices like impact assessments and public consultations.’

The objective of reviewing the current agreement, which has been in effect since 2000, is to increase bilateral trade and investment flows to contribute to the economic growth of both partners.

In 2010, the EU launched Europe 2020, an ambitious growth strategy to foster a smart, sustainable and inclusive economy as an answer to the economic crisis. As part of that, the EU aims to build upon and enlarge its strategic partnerships and consolidate its role among the key players in the world; this includes reviewing the trade agreements already in place with major partners. Examples in practice of this strategy are the successful negotiations with Canada on the CETA (Comprehensive Economic and Trade Agreement), the different stages planned for the TTIP (Transatlantic Trade and Investment Partnership) negotiations with the Unites States, and the initiative to upgrade the current trade agreement with Mexico.

Mexico has increased its presence and power at the international level. It has positioned itself on the top-ten list of emerging countries and worldwide as the 14th largest economy. Mexico has the largest number of trade agreements signed in the world (more than 40) and is a major player in international fora like the United Nations, G20, APEC (Asia-Pacific Economic Cooperation), and OECD (Organisation for Economic Cooperation and Development), among others. Mexico’s major asset is its geographic location: a natural, strategic bridge between North America and Latin America, as well as the Atlantic and the Pacific Oceans, which gives Mexico a truly competitive advantage that hasn’t yet reached its full potential.

Mexico achieved major reforms in strategic sectors, driven by the “new government” image that Mexico projected to the world- a country with a solid structure where political consensus was finally achieved for the first time since 2000.

In 2012, several international publications highlighted Mexico as one of the few countries that managed a quick recovery from the biggest economic crisis (2007-2008) of the 21st century. Thanks to the so-called “Mexican Moment,” major reforms were achieved in strategic sectors including education, energy and telecommunications. These reforms were driven by the “new government” image that Mexico projected to the world- a country with a solid structure where political consensus was finally achieved for the first time since 2000.

It is clear that Mexico is a key partner for the EU, proven by the longevity of the current treaty. The EU is the third largest foreign investor in Mexico and the second largest importer of Mexican goods. Throughout this period of time, the EU has enjoyed a sustained comparative advantage in its exports related to food, chemicals, leather and hides, stone and glass. Ironically, Mexico, as a major manufacturer, has benefited from the EU’s advantage by using those imports in the production of machinery and electric and transport equipment, which are later exported abroad. However, there is a real need to upgrade the treaty, not only according to the new political and economic order in the world, but also to the new technological developments that have emerged within the past 15 years.

There are four strategic areas in which the EU and Mexico have been working for sometime already, as part of their partnership:

Mexico’s institutions seem to be weakening, due to exacerbated populism and lack of trust from the citizens.

Paradoxically, despite Mexico’s success in the international sphere, there are internal challenges that need to be solved, or at least addressed, with comprehensive reforms that foment credibility and good governance practice. Mexico’s institutions seem to be weakening, due to exacerbated populism and lack of trust from the citizens. There is a real need for strengthening social cohesion, decreasing income inequality, addressing concerns caused by an increase in power of organized crime and, last but not least, curtailing corruption among private companies and government authorities.

The EU Parliament and others like the OECD have expressed their concerns recently, encouraging the Mexican government to enhance the rule of law and to implement an action plan to tackle insecurity and corruption, which are major concerns for foreign investors.

Nonetheless, from the economic point of view, Mexico is one of the biggest players around the world. Its value chain integration is a key factor encouraging investment by European companies. In recent years, the EU has been losing its upper hand at the negotiating table; with a highly import-dependent energy sector, manufacturing in Europe is becoming more expensive and less competitive.

Mexico has consolidated itself as a production and exporting powerhouse not only to the United States, but also to Central and South America.

On the other hand, Mexico has the potential to become a powerful provider of renewable energies, proven by the vitality of its manufacturing industries and export-friendly infrastructure. Furthermore, Mexico fancies itself as being the cheapest labour force in the world, with production costs 20% lower than China. All this makes Mexico irresistible to investors. The EU, however, needs to strike a careful balance between trade benefits of delocalisation and the risk that a cheap labour force might bring about social dumping, which is a threat to EU values.

Mexico has consolidated itself as a production and exporting powerhouse not only to the United States, thanks to NAFTA, but also to Central and South America, enjoying the benefits of free trade agreements. Foreign direct investment (FDI) could represent the short-term answer for European companies struggling to increase their exports to North America, investing in various production sectors in Mexico and then reaping the economic benefits from Mexican exports to United States.

The current trade agreement is mainly focused on goods, yet imposes various restrictions. For instance, in the original treaty, only a fraction of agriculture and fisheries are included, leaving substantial room for expansion. This translates to potential economic growth for both partners.

Taking into account that 60% of Mexico’s GDP comes from services, a chapter dedicated to the service sector should be included in the upcoming negotiations. It is also highly advisable to include conflict resolution mechanisms such as investor-state dispute settlement (ISDS) rules and mediation. This would reinforce a modern approach to justice that grants access to all players, taking of course into account sovereignty, regulatory and other sensitivities.

The new treaty should provide a reliable framework, with clear and transparent rules for a comprehensive liberalisation process of trade and investment that creates new jobs and opportunities for both Mexico and the EU.

Evelyn Luz Acevedo Bravo is a lawyer and citizen of both Mexico and Europe. She has worked on both sides of the Atlantic on issues ranging from human rights and electoral law to project financing and acquisition management. She enjoys writing and reporting, which she does for CaféBabel Brussels.